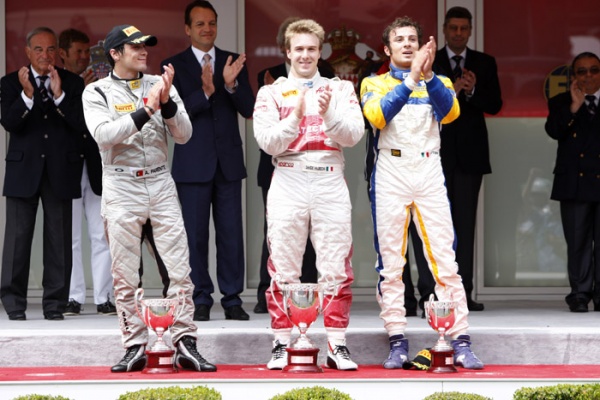 Davide Valsecchi has taken the most momentous victory of his career with a crushing display in this afternoon’s feature race in Monaco, leading from the start to finish apart from his pitstop to capture Team AirAsia’s first race win ahead of Alvaro Parente and Luca Filippi.

The victory was set up at the start when poleman Sam Bird bogged down at the start as the grid stormed off around him: the Italian led the field off the line, with Parente and Stefano Coletti banging wheels as they tried to avoid the flailing Briton, and Giedo van der Garde making a strong start to follow them through Ste Devote ahead of Josef Kral and Jules Bianchi.

Further back Romain Grosjean had a great start to move from last on the grid to P19, while Bird tried to make up for his problems with a string of fastest laps as he chased his rivals further up the road. Bianchi soon made short work of Kral, but was pushing a little too hard: he ran too deep and found his Dutch rival, with both men soon stopping for the day in the pits.

Filippi was the main beneficiary, having sliced his way up behind the pair, and decided to stay out longer than his rivals to take advantage of the clearing track ahead of him, with Grosjean coming to the same conclusion further back. Coletti pitted on lap 12, Parente one lap later, and Valsecchi came in next time around to cover the pair as Filippi set a string of fastest laps at the front of the field.

The gamble paid off as Filippi and Grosjean pitted on lap 22: the Italian had a sticking left rear tyre but still managed to emerge in third place, with the Frenchman on his tail, having jumped everyone but the lead pair with a smart pitstop strategy. Further back, Bird was slicing his way through the field, showing the pace that had him at the front in qualifying as he looked to capture P8 and a reverse pole for the sprint race.

His charge came to an end when he met teammate Marcus Ericsson in P10: neither man was going to give way, with Bird trying a line inside at Anthony Noghes which saw the Swede touch the wall on the outside and bounce back, and the pair came together on the run down to Mirabeau with the Briton bouncing off the wall. The squabble ended as Ericsson’s rear wing detached coming out of the tunnel, and Bird’s left front deflated at the same time.

The resultant safety car could have put paid to Valsecchi’s plans, but the Italian made a sharp restart and eased away from Parente for the win, claiming the fastest lap on his final tour for good measure. Filippi was the next man across the line, punching the air with joy as his wretched luck of the previous two weekends finally came to an end on the Monaco podium, with Grosjean delighted to pick up good points for fourth from last on the grid.

Coletti just held on from Kral to claim fifth at his home circuit, with Carlin teammates Oliver Turvey and Max Chilton claiming the final two points positions, but all eyes were on Valsecchi as he finally achieved a lifetime’s ambition of hearing the Italian national anthem being played for him as he stood on the Monte Carlo podium.