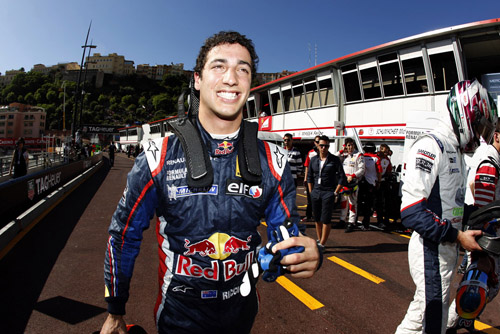 Sergio Perez crashed heavily against the barriers after losing control at the exit of the tunnel.

Sebastian Vettel with a perfect lap takes pole In Monaco.

Renault fail to get out of the second qualifying session.

HRT not posting a time may not be allowed to race in the GP.

As he did last year, Daniel Ricciardo (ISR) will start from pole at 11:10am on Sunday in the curtain-raiser event for the Monaco F1 Grand Prix. The Australian will line up on the front row alongside the New Zealander Brendon Hartley (Gravity-Charouz). It is going to be crucial to get it right on the brakes into Sainte-Dévote. Robert Wickens (Carlin) and Alexander Rossi (Fortec Motorsports) will be trying to find a way through from the second row to prevent Daniel Ricciardo from becoming the first driver to take two Formula Renault 3.5 Series victories in Monaco.

In order to keep the traffic fluid on the streets of Monaco, the 26 drivers in the Formula Renault 3.5 Series were divided up into two groups, according to their standings in the Drivers Championship. Group A, the group containing championship leader Jean-Eric Vergne (Carlin), was the first to go into action.

On his second set of new tyres, Robert Wickens continued to build on his early momentum improving on his fastest time yet again, this time going round in 1’27’’537. Jean-Eric Vergne managed to claw his way up into second place while Sergio Canamasas (BVM Target) ran straight on at Sainte-Dévote. Daniel Ricciardo then changed the face of things as the chequered flag drew near. The Red Bull Racing F1 Team reserve driver went round in 1’27’’182 to take the provisional pole position ahead of Kevin Korjus and Nelson Panciatici. On his final run, Daniel Ricciardo then confirmed his domination of this group, with a lap in 1’26’’427. He thus made sure of a place on the front row of the grid by finishing fastest in group A, ahead of Robert Wickens, Kevin Korjus, Nelson Panciatici and Arthur Pic.

Group B: Like the drivers in Group A, the drivers in the second group came straight out on track on new tyres. Alexander Rossi took control of the early running. The American kept improving lap-by-lap and was fastest, with a lap in 1’26’’671, ahead Anton Nebilitskiy (KMP Racing) and Brendon Hartley on coming into the pits for a tyre change.

While Oliver Webb (Pons Racing) clipped the safety rail and damaged his car as a result, the other drivers were busy going after the time set by Alexander Rossi. Brendon Hartley was the first to ring the changes, moving up to second fastest, while Albert Costa managed a 360° spin at the exit to Massenet without coming into contact with anything or anyone else! This did not stop Brendon Hartley from setting the fastest time in group B, putting in a lap in 1’26’’464 on his final attempt. He thus finished top of the group ahead of Alexander Rossi and Albert Costa, though he was unable to knock Daniel Ricciardo off pole position.

Daniel Ricciardo: “The laps I did in the Toro Rosso during F1 free practice didn’t put me off at all. In fact, quite the opposite. We saw a major improvement in performance between the first and second set of tyres, the track conditions were getting better all the time and I really thought that group B was going to be quicker than us. Last year, I won here after starting from pole, so I hope to do the same again this year!”

Brendon Hartley: “It is a bit frustrating, because on my last three laps I was obstructed in the final sector – by the same driver! Our session was quicker and I had what it took to take the pole. But I will be starting from the front row and that’s the main thing. I really wanted to get things right in qualifying. The next big challenge will be the start!”

Robert Wickens: “I led for nearly the entire session, but Daniel did what he had to do to go one better, while my momentum was cut short by the yellow flags. But that’s the name of the game. It will be necessary to adopt an intelligent approach to the race. I have to think about the championship, but, to be honest, I think everyone dreams of winning in Monaco