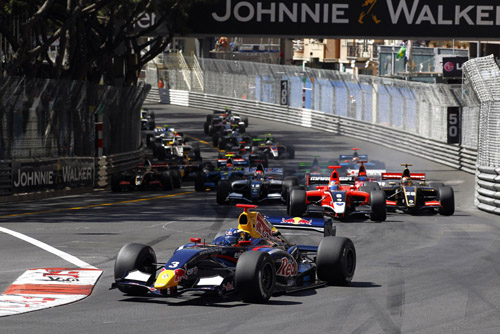 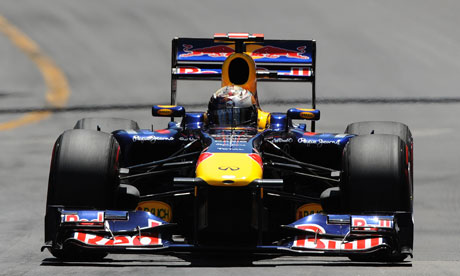 An important second place for Ferrari and Fernando.

Renault: After his crash during the Monaco GP this afternoon, Vitaly complained about his left ankle to the medical crew, so doctors drove him to the Princess Grace hospital for further checks. No fracture had been diagnosed at the circuit.

Once at hospital, it was confirmed that there was no swelling or broken bone. As a precaution, Vitaly will undergo a full body scan but he should be back in the paddock within a few hours.

Lewis Hamiton: “Out of six races, I’ve been to the stewards five times. It’s a joke, “It’s an absolute frickin’ joke.”

When asked why he thought stewards had been paying attention to his driving this year, he joked: “Maybe it’s because I’m black. I don’t know.

I was quite a lot quicker than Massa,”I went up the inside, and the guy turned so early and just turned into me. So I tried to go over the kerb to avoid him and we were stuck together.

I went up the inside of Maldonado and you can see on the [TV] screen that he turned in a good car length too early to stop me overtaking him and he crashed into me.

Sebastian Vettel: “It is fantastic,! It was a very long race and a long way to the chequered flag and at some stage the victory seemed quite far away.

The safety car came out and we got back in the lead but it was quite difficult to stay ahead. It is difficult to pass here but they had such better grip. I called to box and I said I wanted to stay out as it was the only chance to win the race.

It was getting close and with six laps to go before we had a suspended race. Obviously I was struggling with my tyres but I think we could have made it to the end.

Then I saw the red flag and it was good to hear Vitaly was fine, and we were able to change tyres as I could get rid of these old tyres and then had another short sprint race to the chequered flag.

We took the risk. We wanted to win and we got the reward. I am happy and it is an extreme honour. It is one of the best grands prix all year and surely a nice one to win.

I think at the end of the day, surely if there had been no safety car it would have been difficult to beat Jenson as he was so far ahead, but there was a safety car. We have been looking after our tyres, even under pressure.”

Vitaly Petrov: “First of all, I would like to thank all my fans for all their well wishes, the medical teams at the circuit, the hospital for their efficient and friendly assistance, and the team for their concern. It was quite a big impact and I could not feel my legs very well after the crash.

I thought it was best for the medical team to assist with removing me from the car as it was difficult for me to move and my legs were trapped in the cockpit. I did not lose consciousness but I was in quite a lot of pain when I was inside the car. It is a shame as I made a good start, gaining two places straight away. After my pitstop, I was stuck behind Kamui Kobayashi – who was very slow- and Adrian Sutil -who was defending his position really too agressively- but I was being cautious as it is very difficult to pass on this track.

Then I got caught in the incident. It is a shame, as we could have got quite a few points this weekend. I’m now looking forward to Montreal. We need to sort out our problems in qualifying and we will get some good results, as our race pace is usually ver good.”

As pole sitter and race victor, and with the fastest race lap to boot, Daniel Ricciardo (ISR) was the undisputed prince of Monaco this weekend. The Australian reserve driver with the Red Bull Racing F1 Team, succeeded in becoming the first driver to win twice here in the Formula Renault 3.5 Series. It also shoves him up to 5th place in the championship rankings. Robert Wickens (Carlin), second ahead of Brendon Hartley (Gravity-Charouz), boost his position too, putting him just one point off the leader, teammate Jean-Eric Vergne (Carlin).

A few hours before the F1 Grand Prix de Monaco, it was Formula Renault 3.5 Series’ privilege once again to kick off one of the most famous days on the motorsport calendar. With the stands already packed and the grid full of famous faces from the Formula 1 world, Daniel Ricciardo lined up in pole position ahead of Brendon Hartley, Robert Wickens and Alexander Rossi (Fortec Motorsport). Ricciardo got a great start and Hartley didn’t. So it was Robert Wickens who bagged second in Sainte-Dévote. The Australian driver pushed hard during the first few laps, but Wickens and Hartley stayed in touch. The three men pulled away from the peloton, led by Albert Costa and Alexander Rossi (Fortec Motorsport).

Positions changed in that group after a coming together between 8th and 9th placed Charouz and Nebilitskiy, at the Fairmont hairpin. The two cars had to pull out and the safety car made its entry. At the restart, Ricciardo kept the lead and made every effort to widen the gap, when there was another incident at Mirabeau where Stéphane Richelmi (International Draco Racing), Andre Negrao (International Draco Racing) and Jake Rosensweig all hit the barriers.

A lap later, Alexander Rossi lost control of his car at Massenet, after coming together with Oliver Webb (Pons Racing), himself in trouble after a shunt. Rossi’s 5th place was devolved to Kevin Korjus and the safety car came out again. Ricciardo dealt with the restart perfectly and continued to lead ahead of Robert Wickens and Brendon Hartley under the checkered flag. Meanwhile behind the podium trio, the last lap was marked by a clash between Sergio Canamasas (BVM Target) and Cesar Ramos (Fortec Motorsport), as Albert Costa battled hard to defend his 4th place against Kevin Korjus, Nelson Panciatici, Arthur Pic, Jean-Eric Vergne and Adrien Tambay (Pons Racing). Ultimately however, the Spanish driver got a 10 second penalty for jumping the start, so he finished 9th. Jean-Eric Vergne also got himself a ten second penalty for cutting the first corner at the start. That put him back to 12th position and he leaves Monaco out of the points. That means his teammate Robert Wickens is now very hot on his heals in the championship stakes.

Daniel Ricciardo: “Last year, it felt like the race wasn’t going to end! This year, I stayed very concentrated to the finish and I kept up a good pace throughout. I’m really pleased with this second win here. Some people thought that running with Toro Rosso here this weekend would maybe put me off. But how could I turn down the opportunity to drive in F1 at Monaco… Anyway, I more than proved it was definitely a good idea …”

Robert Wickens: “Overtaking is almost impossible here, we all know that. My only chance was if Daniel made some mistake, which never happened. We pushed very hard, much quicker than in qualifying. For me it’s a good result for the championship, because Jean-Eric didn’t score. The rest of the season is very open.”

Brendon Hartley: “It’s a great reward for Gravity-Charouz to get this first podium here. I started on the dirty side of the track, which explains my bad start. We were all three on the same pace, but I had brake problems throughout the race. We’re still ramping up.”