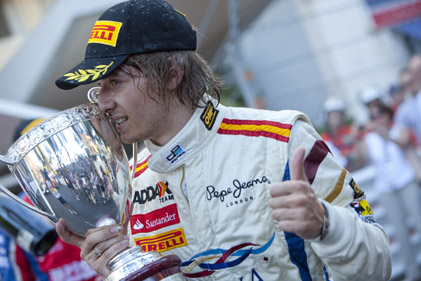 The 2011 GP2 Championship is going to be a long hard grind as the first three opening rounds have proven. No single driver has established an early dominance and only two points separate the top five in standings. After six races championship lead is shared by two drivers, Romain Grosjean and Sam Bird.

Round three, after Istanbul and Barcelona, was staged in the streets of Monte Carlo past weekend.  In the feature race Italian Davide Valsecchi, ex-GP2 Asia champion, gave Team Air Asia their first victory in the series. Portuguese Alvaro Parente was second for Spanish Racing Engineering team, and Italian Luca Filippi was third with Super Nova team.

In Saturday’s sprint race Charles Pic gave his Barwa team second win of the season, after leading from start to finish. The French driver started from pole after finishing eighth in the feature race. He also won the opening race of the Barcelona event.

Czech driver Josef Kral was second for Christian Horner-owned Arden International. The all French ‘le combo’ of Grosjean and DAMS team was third man on the podium.

Two drivers, Jules Bianchi and Esteban Gutierrez, both teammates at Lotus-ART team did not have a good time in Monaco, and both failed to score any points.

Sam Bird, apart from two points he earned for inheriting pole position for the feature race following Giedo van der Garde’s penalty, also failed to add any points to his score but still shares the top spot in the championship standings with Grosjean on 23 points.

Pic is only a point behind. Valsecchi and der Garde are next, both on 21 points.

For more information on the series, teams and drivers please visit www.gp2series.com

Greetings and racing regards from California.