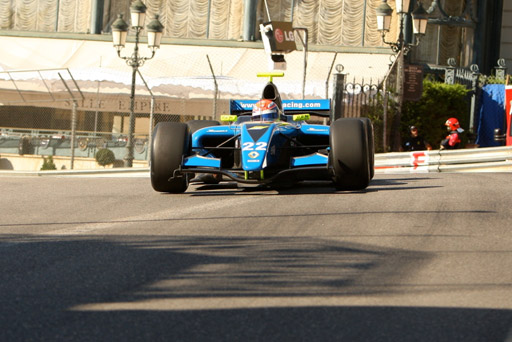 Monaco’s circuit layout demands absolute concentration, the smallest error can be fatal. It is the mythical circuit all drivers dream one day of winning or at least showing their worth. That’s what Nelson Panciatici achieved when he crossed the finishing line in a nice 5th place in the Formula Renault 3.5 race.

In the one and only free practice session, Nelson Panciatici concentrated on reaching a maximum number of laps to be well prepared for the qualifiers. Time spent on the track here is essential to hope for a good qualifier, the starting position is key because overtaking during the race is difficult.

In Monaco, the qualifiers are divided into two groups and Nelson Panciatici made his group’s qualifying runs a heated race to the finish. In the top three right until the end of the session, he finally finished in 4th place synonymous with a 7th place on the starting grid.

The next day, Nelson Panciatici produced a solid and intelligent performance in the race, he made no faults and avoided all traps to finish in a good 5th place. It’s a shame Anton Nebylitskiy had to abandon because he was also having a good race.

Nelson Panciatici: “I arrived in Monaco with the level intention of fighting for the podium and so I’m a bit disappointed with the result. We were fast in the qualifiers, really close to the best, but in the race our potential did not get us closer to the podium. In these circumstances, our 5th place is positive because it puts us back in the championship. We worked well with Adrien, my engineer, we were just a bit short on performance which would have put the pressure on our adversaries. I got a lot of pleasure driving on this circuit!”

For Bruno Besson, Team Manager of KMP Racing, his statement is practically the same: “We worked well during the free practice session to prepare for the qualifiers and even though Nelson was in the higher group, I think we could have finished 2nd or 3rd, but he made a small mistake in his last lap. Nelson then ran a good race without making any mistakes, which isn’t easy in Monaco. We are going to have two important meetings where we will need to make it to the podium to keep rising in the championship.”

The next meeting for Formula Renault 3.5 will be on the Nurburgring track, the 17, 18 and 19 June next in the context of the World Series by Renault.