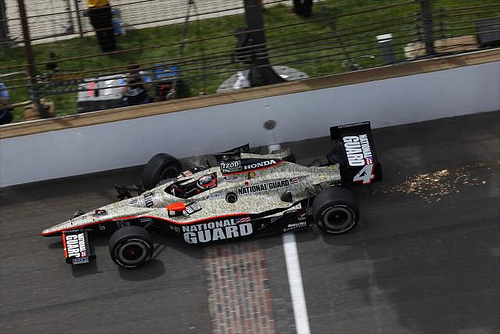 The cool morning temperatures at the Hungarian track on day 2 of mid-season testing meant when the lights turned green and the pitlane opened that all the drivers fed out onto the track for their initial installation laps, before swiftly returning to the pits and switching to new tyres.

James Calado was the first driver to post a quick time on new rubber, but soon after the Lotus ART driver found himself swapping fastest laptimes with Status Grand Prix’s Alexander Sims, MW Arden’s Mitch Evans and Jenzer Motorsport’s Nico Müller – the latter setting a laptime over half a second quicker than yesterday’s fastest man Lewis Williamson. But, with less than thirty minutes gone in the session, the Scot was back on top and continuing his good form from the previous day. Müller was bumped down to second ahead of Calado, Evans, Marussia Manor Racing’s Adrian Quaife-Hobbs and Carlin’s Conor Daly.

For the remainder of the session, times were mostly static as once again the teams largely used the three hours of this morning to develop a good understanding of the Pirelli P Zero soft slick tyres and concentrate on setups rather than quick times. Williamson’s quickest laptime of 1:37.528 remained unbeaten, and Quaife-Hobbs improved to second. Müller, Calado, Evans, Sims, Daly, Tom Dillmann, Simon Trummer and Valtteri Bottas rounded out the top ten. Quaife-Hobbs was later demoted to fifth after it was deemed he exceeded track limits whilst setting his quickest time.

The afternoon session was busy with teams working on race simulations and setups ahead of Round 3 in Valencia, Spain at the end of the month. Once again Williamson was first to top the time sheet for MW Arden, and for the first hour the Scotsman was closely followed by Dillmann, Evans and Series leader Nigel Melker. The Status Grand Prix duo of Antonio Felix Da Costa and Sims then hit the track and moved up to third and fourth respectively. Laptimes were mostly static until midway through the session when Müller knocked Williamson into second, but it was short lived as the Scot was quick to fight back and reclaim his place at the top.

As the final hour approached, the temperature dropped and the long anticipated rain arrived at the Hungaroring. However, the wet weather was short lived and soon enough the cars trickled back out on track during the final hour. With the chequered flag in sight, it looked like Williamson had topped his second session of the day, but in the dying minutes Lotus ART’s Bottas put together the perfect lap to snatch the top spot on his final flying lap in 1:38.410. Williamson had to settle for second ahead of his teammate Trummer, Müller, Vainio and the third MW Arden car of Mitch Evans.

GP3 Series will be back on track on 16-17th June for the second mid-season test in Valencia, Spain.