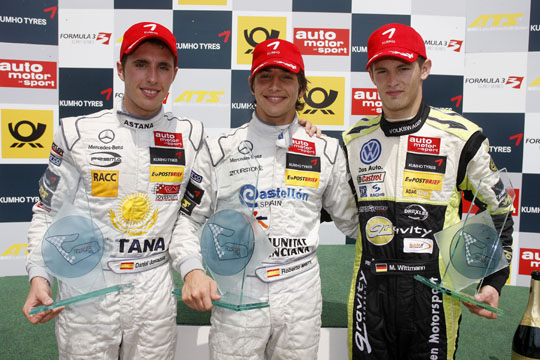 Roberto Merhi (Prema Powerteam) won the tenth season round of the Formula 3 Euro Series at the 4.326 kilometres long Red Bull Ring that was re-opened in mid-May. With a margin of over one second, he crossed the finish line ahead of his team-mate Daniel Juncadella (Prema Powerteam), who ended up second. Marco Wittmann (Signature) completed the podium upon the Formula 3 Euro Series’ return to Austria. With his success, Merhi extended his lead in the Euro Series drivers’ standings. He now has 152 points to his tally. With 119 points, Marco Wittmann remains runner-up in the drivers’ standings.

Starting from second place, Roberto Merhi took the lead from pole-sitter Daniel Juncadella. In the following 26 race laps, the Spaniard didn’t make any mistakes and drove an undisputed victory home. For 20-year old Merhi, it was the fourth season win in the Formula 3 Euro Series.

Behind the top 3, returnee Tom Dillmann (Motopark) came out on top after a nice battle with Nigel Melker (Mücke Motorsport). The Frenchman overtook the best-placed Euro Series’ rookie on lap 16. Daniel Abt (Signature) was classified sixth.

Roberto Merhi (Prema Powerteam): “The race was really good and also relatively easy. It was great fun. Initially, I was able to pull a little gap over Daniel, but in the second half of the race, he closed up again. The set-up of our car was great, too, as our first and second place show.”

Daniel Juncadella (Prema Powerteam): “I am happy with second place, even though I would have liked to win from pole position. However, my start, which was the key to victory today, wasn’t very good. On my starting grid position, I didn’t expect so much grip, but now I know what it is like and hopefully will do better in tomorrow’s third round.”

Marco Wittmann (Signature): “We were already struggling in qualifying and in the race, the Prema Powerteam cars were again quicker than ours. Third place is not what we were dreaming of. Now, we have to continue working hard in order to return to winning ways.” 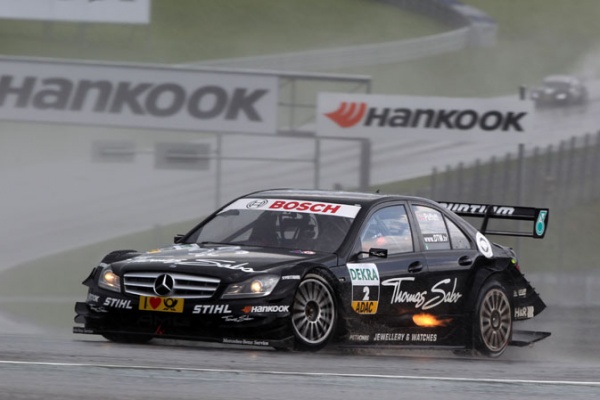 Tomczyk strong in the rain – Pole at the Red Bull Ring

Spielberg. A great comeback of the DTM in Austria. For the first time since 2003, the fans again trekked to a DTM qualifying at the Red Bull Ring that was re-opened in mid-May. In front of the unique scenery in the Styrian mountains, German Audi driver ended up fastest and claimed pole position in a thrilling qualifying. On a wet track and in difficult conditions, the 29-year old completed the 4.326 kilometres long undulating track in 1:40.001 minutes. “Pole position was our goal after everything went very well so far this weekend. Everything has to fit together in order to achieve a good lap time. Apparently, that has worked out today. It is the best position to win a race”, said the delighted Audi driver, who will be starting a DTM race from first place for the eighth time in his career. Tomczyk, who is currently third in the points’ standings, is racing a 2008-spec Audi A4 DTM this season.

Only 0.325 seconds separated Oliver Jarvis (Audi) from pole position. In second place, the Brit completes the front row of the grid. Third place for Mercedes-Benz driver Ralf Schumacher was the reason for great joy among the fans. The 35-year old ex-Formula 1 driver already started from third place into the season opener at Hockenheim. “I had already forgotten how beautiful it is here. It was difficult as the weather changed all the time. Especially at such a fast track, aquaplaning is dangerous. Being third provides good opportunities for tomorrow. But we also have to see what kind of weather is awaiting us. Tomorrow, many friends and my family will be here and I hope that it will be a good race”, said Schumacher.

Italian Edoardo Mortara (Audi) was also very happy. The DTM novice already made it into the second row of the starting grid in his third qualifying already. Following tenth place on the grid at Hockenheim and seventh at Zandvoort, he ended up fourth in qualifying at the Red Bull Ring.

After pole positions at Hockenheim and Zandvoort, a series came to an end for points’ leader Bruno Spengler. The Mercedes-Benz driver only ended up twelfth. “Today, I was struggling for grip. Twelfth place is not great, but nevertheless, I will have fun in the race”, Spengler said after qualifying.

For the second time in a row, Audi driver Mattias Ekström failed to make it into the second qualifying heat. In heavy rain, the Swede slid into the tyre barriers at the pitlane entry and damaged his car in such a way that qualifying was over for him. “There is a new surface on the track in the pitlane entry. There, I had aquaplaning and I was only a passenger in my own car”, said Ekström, who has to start the race from last place.