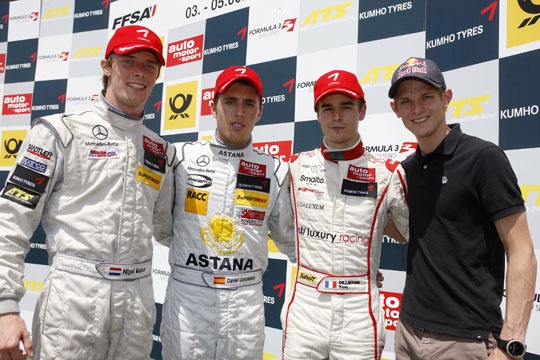 From pole position, Daniel Juncadella (Prema Powerteam) won the twelfth season round of the Formula 3 Euro Series. At the 4.326 kilometres long Red Bull Ring in Styria, the Spaniard took the lead at the start and went on to win the race with a five seconds’ margin over Nigel Melker (Mücke Motorsport). For Juncadella, it was the third victory of the season. Third place went to guest driver Tom Dillmann (Motopark). Daniel Abt (Signature) took the chequered flag in fourth place.

While Daniel Juncadella drove a safe victory home to be presented with the winner’s trophy by three times’ Olympic ski jumping gold medallist and Four Hills Tournament winner Thomas Morgenstern, his team-mate Roberto Merhi (Prema Powerteam) collided with Felix Rosenqvist (Mücke Motorsport) on the opening lap already. Both young drivers were battling for second place at the time. Swede Rosenqvist retired on the spot, points’ leader Merhi still made it into the pit lane, but also had to retire. Nevertheless, the Spaniard retains his lead in the points’ standings while Daniel Juncadella moved back up into second place after his victory, overtaking Marco Wittmann (Signature). At the Red Bull Ring, the German retired due to a technical problem.

Daniel Juncadella (Prema Powerteam): “For me, it was a perfect race. I concentrated on making a good start and I succeeded. Of course, it was my luck that Felix Rosenqvist and Roberto Merhi retired directly behind me. The car ran perfectly, I became faster and faster. I want to dedicate this victory to my team manager René Rosin, who isn’t here as his wife is about to give birth.”

Nigel Melker (Mücke Motorsport): “We were quick throughout the weekend, but I had problems making best use of the tyres in the first two races. In the third race, things went significantly better.”

Tom Dillmann (Motopark): “We have really deserved this podium. Throughout the weekend, my car was really good. In the first race, I was able to move up from seventh place on the grid to finish fourth and now I am even on the podium.”