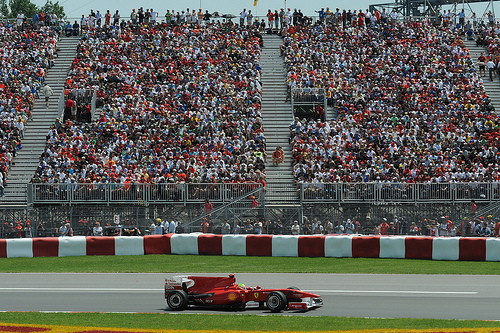 Round seven of the 2011 FIA Formula 1 World Championship takes place this weekend in Montreal at Circuit Gilles Villeneuve. The late great Canadian legend won his maiden Grand Prix in the first running of the event on this man-made island in 1978.

Reigning World Champion Sebastian Vettel is on a hot roll. The Red Bull driver has won five of the six races so far this season, and an impressive eight of the last nine races. The German wunderkind is well on his way to becoming the youngest two-time world champion, and will be looking for his first victory in North America.

It was on this continent, back in 2007 at the US Grand Prix, that Vettel made his F1 debut and scored a point in his first race for the BMW Sauber team. He was replacing their star driver Robert Kubica, who a week earlier had escaped serious injuries in a crash during the Canadian Grand Prix. Sadly, another crash, this time in rallying with serious consequences, has again sidelined the Polish driver.

Last year Vettel qualified on the front row and finished fourth. His qualifying brilliance, speed and reliability of the Red Bull make him one of the top contenders for success on Sunday.

Lewis Hamilton, currently second in the title chase, won the race last year and also celebrated his maiden F1 victory in Montreal in his 2007 rookie and ‘cage rattling’ season.

In 2008, he narrowly avoided Kubica’s BMW Sauber in the pit lane and crashed into Kimi Raikkonen’s McLaren, allowing the men from Munich and Hinwil, Switzerland, to celebrate their only F1 victory.

Tire wear is a major issue in Montreal. Jenson Button, the Smooth Operator, was second last year in his McLaren. He could surprise his teammate and the Red Bull matador on Sunday.

Fernando Alonso, winner here in 2006 and third last year, could be looking at a long and lonely season if the Prancing Horse is unable to match the pace of Red Bull and McLaren in this race. The two-time world champion is fifth in the championship with 69 points, a whopping 74 points behind Vettel.

Mark Webber is third in the championship 64 points behind his teammate; another win for Vettel would be very hard to overcome for the likeable Aussie mate.

Drivers facing Canadian mist – literally and figuratively – include Felipe Massa, Nick Heidfeld and the Toro Rosso duo, Jaime Alguersuari and Sebastien Buemi. The heat is on all of them and it will not be a surprise to see a few new and old faces before the European leg of the season is over.

Romain Grosjean may get what very few enjoy in the Piranha pool, a second chance.

Frenchman Jean-Eric Vergne and fellow Red Bull supported driver, Australian Daniel Ricciardo, are steaming ahead for a berth in the top echelon of motor racing.

Showers are expected on race day. For the first time this season there will be two DRS zones. The Pirelli rubber in Montreal will have the same soft and super-soft compound as in the last race in Monte-Carlo.