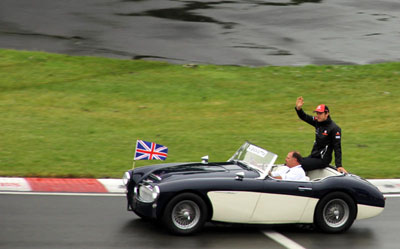 Moments in Montreal through the Lens of Lindsay

Here we have Jenson on the driver’s parade. I snapped a picture of all 24 drivers; some came out better than others (see the photo of Schumacher patriotically saluting his great leader). Fortunately the photo of our soon-to-be race winner was one of the better ones. I bet he was thinking that in 5 hours time he would be on a plane somewhere, rather than still circling the track at racing speeds. He crashed out fewer drivers on this parade lap than he did in the actual race, thankfully. 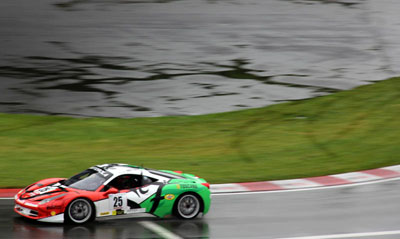 This is a photo of one of the entrants in the Ferrari Challenge support race that took place just before the driver’s parade. This particular car, although not competing for the win, was my favorite looking Ferrari in the race. This was an awesome race and with a final-lap mistake by the race leader that gave the win to the guy chasing him, it was a strange foreshadowing of what was to come in the main event. 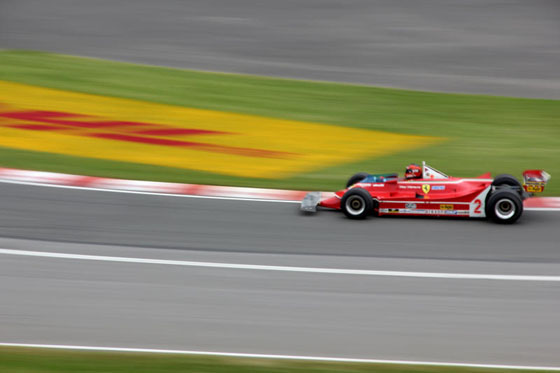 Ah yes, the Flat-12 Ferrari 312T5 that a certain Monsieur Villeneuve raced drove in the 1980 season. Unfortunately it was the only Ferrari Gilles ever drove for a season without dragging it to a race win. It was a rubbish car thoroughly undeserving of the unusual numbers it carried on it that year. It was no more competitive in this Historic F1 Race, but it looked nice in the process. Villeneuve is my all-time favorite driver so I was looking forward to seeing one of his old cars in action. Too bad it was this one. Anyway… notice the driver completing the look with a replica of Gilles’ helmet. 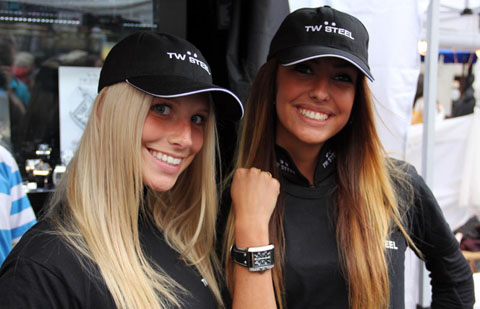 The models at the TW Steel booth at a party on Peel St. in downtown Montreal Saturday night. TW Steel’s slogan is “Big in oversize watches.” But “Big in oversize mouths” is probably more appropriate. Nonetheless, these two ladies were happy to smile for a quick photo. 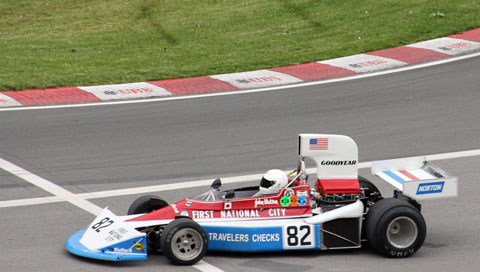 One of the few not-so-attractive cars running in the Historic F1 Race; so I can’t add much insight here other than the fact that I took photos of all of the competitors so I therefore ended up with one of this car from the era of ugly F1 machines in the mid 70’s. I believe this particular monstrosity is the Penske that gave John Watson his first win in Formula 1.

A Canon-load of thanks to Lindsay Mize, a member of F1Weekly’s familia.