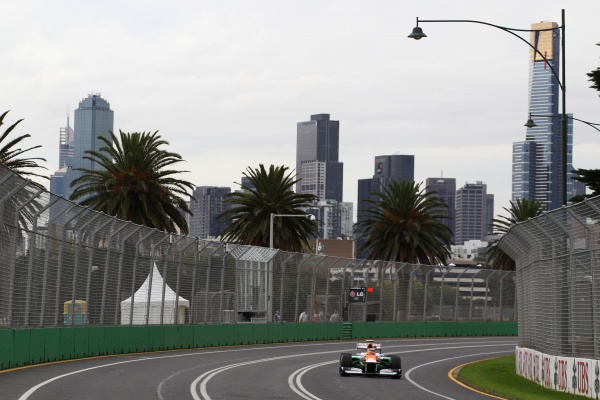 Paul Di Resta: “Difficult to say too much about the first or second session because the conditions were so inconsistent with the rain showers. Even so, we made the best of it and focussed on assessing the aero package we have here and managed to learn a few things. We also made some set-up changes between the two sessions and the car felt better in the evening, so that was positive. The difficult thing is that we didn’t really get an impression of where everybody is in terms of performance, so there are still lots of unknowns going into tomorrow.”

Nico Hulkenberg: “Both FP1 and FP2 had mixed conditions, especially FP2 with the heavy rain, which arrived just before the start of the session. But we made the best of it and I ran on the full wets, the intermediates and the soft tyres when the track had dried out. It’s difficult to read much from the times because not everyone ran the soft tyres and there were lots of different fuel loads, but the main thing for me is that I have a good feeling with the car already.”

Kimi: “We didn’t really learn much from today due to the weather, but it’s the same for everyone. We tried a different steering rack in the first session. It would have been fine to run, but we knew that the base system would be better. The setup we have now is working well, it may take a while before we get it perfect but we’ll make the best of it. Hopefully the weather will be better tomorrow and we’ll be happier after qualifying. I didn’t push too hard today; if it’s dry tomorrow we’ll have a better idea of what we need to do.”

Romain Grosjean: “We waited to be able to go out on slick tyres, as we expect it to be dry for the rest of the weekend; there’s no point taking any unnecessary risks. The E20 feels very good and I’m happy with the balance of the car. I’ve been learning the track this afternoon and I’ve been focusing on improving my lap times as the day went on. We had to be patient, but we managed to get some decent laps in at the end and these were valuable. It’s a fantastic track and the changing scenery as you drive through the park is incredible. I feel comfortable and confident in the car and am really looking forward to qualifying.”

Narain Karthikeyan: “Today we ran with a new car in mixed conditions, so tomorrow will be like starting all over again because it looks like conditions will be dry. With few laps and a new car, we were unable to assess the balance of the car. But it was important to do some mileage and we completed 19 laps which isn’t too bad, but we still have a long way to go. As for the new car, these problems are common, they tend to happen in preseason testing and this is our testing”.

Pedro de la Rosa: “We managed to complete our installation lap in order to check the systems, but afterwards we detected a problem with the hydraulic system which forced us to stop. This is all part of the learning process, we’ve arrived here with a new car and just to have been able to get out for the second session was a feat, but we would have liked to have done more and learnt more. The last parts of the car arrived late and thanks to the brutal effort put in by the whole team, we were at least able to complete the installation lap and, thanks to this, we know where the problem is for tomorrow and can fix it. We start tomorrow with one problem less, and will surely run into another one, but that is part of the learning process. We knew that this Grand Prix would be difficult so we need to be patient”.

Pastor Maldonado: We completed the majority of our programme and did a longer run this afternoon. The car is performing well and we’re going in the right direction, but tomorrow we will see when we finally get into qualifying.

Bruno Senna: The conditions today cut our running a little, but it was the same for everybody. This afternoon we completed some simulations to gain a greater understanding of what the car is doing and we are still learning. In terms of pace, we will see what we can achieve tomorrow afternoon.

Heikki Kovalainen: “The car felt good from the first proper run this morning and we found that the baseline we had set over the winter carried over exactly as we had planned into today’s practice sessions. It’s a shame that the conditions today meant that we couldn’t test the tyres more, but that’s the same for everyone, so the main thing was that we had a good balance all day, and kept improving the setup in both sessions. It’s also good to see that the new spec front wing that we ran both this morning and this afternoon is giving more grip overall, so that’s another positive step forward and puts us in good shape for tomorrow.”

Vitaly Petrov: “That was a reasonable day for me. The weather meant we weren’t able to try too much with the setups and we had a small problem this morning that cut short the final run, but one of the main things for me today is that I feel very comfortable with the team. We’re quickly building up a good relationship between me and the engineers and the mechanics, so as that keeps growing we’ll be able to get more out of the car and keep finding the pace that we know this car has.” 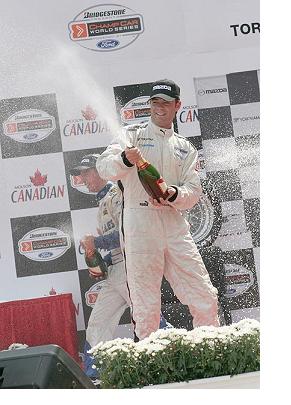 After much success in karting and two years driving in Grand-Am Cup, Jonathan Bomarito moved to Formula Ford 2000 USA in 2003 and won the championship. The next year he moved to the Atlantic Championship and finished 9th in points. The following year he captured his first series win and finished 5th in the championship. 2007 saw him finishing 5th again, winning at San Jose. In 2008, he was the Atlantic Series runner-up, capturing 3 victories. He also drove in the last three Rolex 24 Hours of Daytona, 2008-’10, in the SpeedSource team’s Mazda RX-8, competing in the Rolex GT class. He won this year’s event, sharing the car with Sylvain Tremblay, Nick Ham and Dave Haskell. Bomarito will continue competing in Mazda #70 with Tremblay, as they compete for the 2010 Rolex GT Series crown.

Bud Moeller  is a Formula One race car driver in North America and Europe, racing in Historic Grand Prix and Ferrari’s F1 Cliente program. Bud Moeller’s fascination with Ferraris goes back to the days of Ferrari great Niki Lauda, one of his heroes back in the 70’s. “He was a driver who not only won world championships, but had a crash that nearly ended his life, and came back and won yet another championship after that. Phenomenal,” says Moeller. At age 26, Moeller bought his first Ferrari — a 308 for weekend use — with a partner. Moeller had 3/4 of the car, therefore he got the use of it three weekends of the month. “It worked out just great for both of us. We were able to do something we couldn’t have done alone.” Since then, Moeller has had a Ferrari in the garage almost continuously. “I got the bug very early,” says Moeller. “Once it’s in your blood, it stays.” Since then, the Ferraris he’s owned include two Daytonas, two Boxers, a 330 GTC, and a 355; he currently owns a 550 Maranello and has just received a brand new 360 Spider.