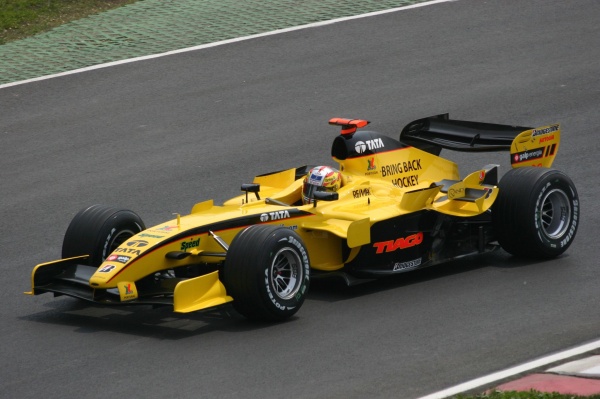 Tiago Vagaroso da Costa Monteiro a Portuguese racing driver. He drove for Jordan, Midland and Spyker MF1 teams—all different iterations of the same team as it was bought by new owners during a two year stint as part of the Formula One paddock. In the first year of his Formula One career he set a new record for the most finishes by a driver in their first season , and also achieved a podium finish (3rd place) at the controversial 2005 United States Grand Prix. He currently shares the record for the most finishes in a season with Nick Heidfeld and Felipe Massa, while he also shares the record for most finishes in a row for a rookie with Heikki Kovalainen, who had also achieved this landmark in 2007.

Monteiro raced with the semi-privateer SR Sport team in the 2010 WTCC season driving a SEAT León TDI, following the withdrawal of SEAT Sport at the end of the previous season. For 2011, he again drove for SUNRED Engineering, where he was partnered by rookies Aleksei Dudukalo and Pepe Oriola, as well as 2010 teammates Michel Nykjaer, Fredy Barth and Gabriele Tarquini. He remains with the team for 2012 under the “Tuenti Racing Team” banner.

In the United States Grand Prix he achieved his first podium finish in controversial circumstances when all but three teams pulled out due to concerns over tyre safety (the Michelin-equipped teams pulled out of the race, not taking their place on the grid. The Bridgestone teams were the only ones to run). Monteiro finished third out of just six drivers.

At the podium ceremony, at which none of the scheduled dignitaries were present, Ferrari drivers Michael Schumacher and Rubens Barrichello quietly accepted their awards, and quickly exited. However, Monteiro stayed behind to celebrate his first podium finish alone amid the booing fans, a decision which although initially controversial, was later met with some sympathy from the Formula One fraternity.

As of the 2005 United States Grand Prix, Monteiro is currently the most successful Portuguese driver in Formula One history. Pedro Lamy had previously held this record before with one point and sixth place achieved at the 1995 Australian Grand Prix with Minardi. Also of note, as of the Belgian Grand Prix (where he also scored another point), Monteiro had finished every race of the 2005 season, and holds the record for consecutive finishes for a rookie driver in Formula One, taking this from Jackie Stewart (1965 season) and Olivier Panis (1994 season), who finished their first six races. At the Brazilian Grand Prix however, driveshaft failure brought his run to end. Despite this however, by finishing the last two races of the season in Japan and China, he still managed to break the record for the most finishes in a single season. Michael Schumacher finished all 17 races of the 2002 season, whilst both Schumacher and Rubens Barrichello finished 17 out of 18 races in 2004. An 11th-place finish at the Chinese Grand Prix meant that Monteiro had finished 18 out of the 19 races.

Shortly before the 2005 Turkish Grand Prix, Monteiro suffered toothache that was severe enough to prevent him taking part in the race. However, his team principal Colin Kolles, a qualified dentist, performed emergency root canal surgery, and Monteiro was fit enough to race, which saw him finish 15th following a collision with Juan Pablo Montoya, which resulted in the Colombian running wide on the penultimate lap and losing second place to Fernando Alonso, thus preventing Montoya’s McLaren team scoring its first 1–2 finish since the 2000 Austrian Grand Prix. 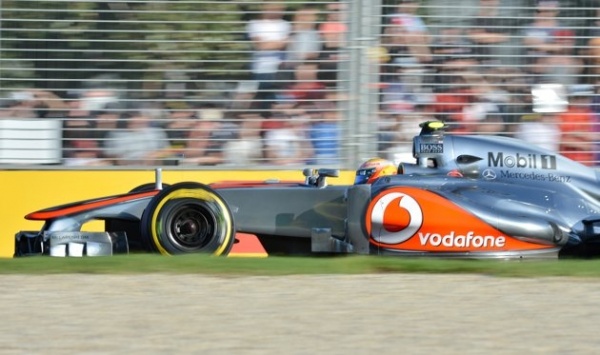 Bulls Slaughtered in the Park

Hammy hammers a fast lap and Grosjean goes quick. F1 is back!

The 2012 Formula 1 season starts Sunday in Albert Park, Melbourne. It’s an all-McLaren front row with Lewis Hamilton starting from the 20th pole position of his career, which started here five years ago in grand style with a podium finish.

“Incredible feeling to be back here,” said the 2008 World Champion in the press conference after the qualifying session was over.

Teammate Jenson Button, winner of the Australian Grand Prix in 2009 & ‘10, was looking for his first pole position as a McLaren driver but was unable to beat Hamilton’s time of 1m 24.922s and will start on the front row, claiming the team’s performance is “only the beginning.”

Romain Grosjean led the return of French drivers in F1 – three in qualifying – and was Saturday’s biggest surprise. The 2011 GP2 Champion was all smiles after placing his Lotus-Renault third on the grid.

He will share row two with Michael Schumacher. Best qualifying result for the seven-time world champion since his return with Mercedes.

The reigning world champion Sebastian Vettel and Red Bull team were expected to continue their domination from the previous two seasons. Friday’s wet-dry session resulted in whispers of sand bagging, but the third and final practice session indicated the Red Bull stampede may be coming to an end.

“McLarens were out of reach today,” said the youngest double world champion and race winner here last year. Vettel will start sixth next to his Australian teammate Mark Webber.

The second Mercedes of Nico Rosberg will start on the inside of row four. The German at one time looked good to grab his first career pole position. Next to him will be Pastor Maldonado of Venezuela in his Williams-Renault.

Nico Hulkenberg is the fourth German in top ten. His Force India-Mercedes starts next to second Aussie mate in the race, Daniel Ricciardo in his Ferrari-powered Toro Rosso. His French teammate Jean-Eric Vergne will start 11th on the grid in his very first Formula 1 race.

The Reds were never a threat and both cars failed to reach Q3. Numero Uno Fernando Alonso was not a happy camper after he was trapped in the gravel and did not get the requested push from the marshals. He will share the sixth row with Vergne.

The HRT-Cosworth cars of Pedro de la Rosa and Narain Karthikeyan were outside the 107% rule. Both drivers were over seven seconds slower than Hamilton’s pole winning time.

Formula 1 first came to Albert Park to open the 1996 season and Jacques Villeneuve made a dramatic Grand Prix debut and put his Williams on pole.

Last year the race was won by Vettel over Hamilton. Vitaly Petrov was third and became the first Russian on an F1 podium. 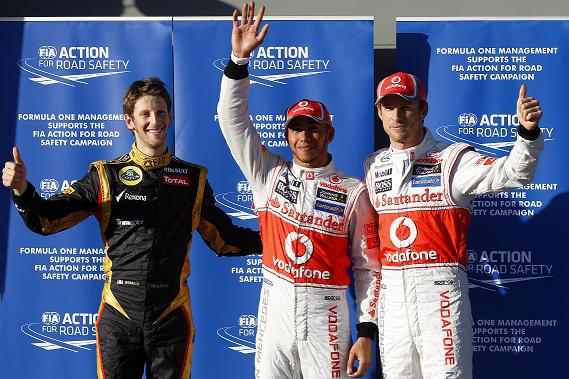 McLaren one two with Hamilton on pole in Melbourne

Alonso beached his Ferrari in Q2 and Massa still couldn’t match it!

Grosjean with a fantastic third place for Lotus F1

Lewis Hamilton: “It’s an incredible feeling to be back here and make such a good start. I believe this is mine and Jenson’s first one-two in qualifying, so it’s fantastic.

“I’m massively proud of the team, with the job they do, to see that they just never give up. I think it’s going to be incredibly tough, very tense throughout the race. Looking after tyres will be key, as always, and obviously getting off the line.”

Romain Grosjean:“Today is like a dream come true. I only really discovered the Albert Park circuit in the dry this morning and I didn’t know what to expect. When I heard my position over the radio I just could not believe it. This third position shows one thing: you must believe in your dreams and hold on to them, whatever happens. Very few people still had faith in me after my first life in F1, but we’ve all

worked very hard to start a new adventure and I’m very happy to be able to put a great performance in right from the start of the season. Thank you also to the team for designing such a nice, tidy and quick little car. I will not get carried away because, as the saying goes, you don’t score any points on a Saturday. We all know that Melbourne can be a very tricky race. I hope we can keep going like this all season long and in the end it will be a nice story.”