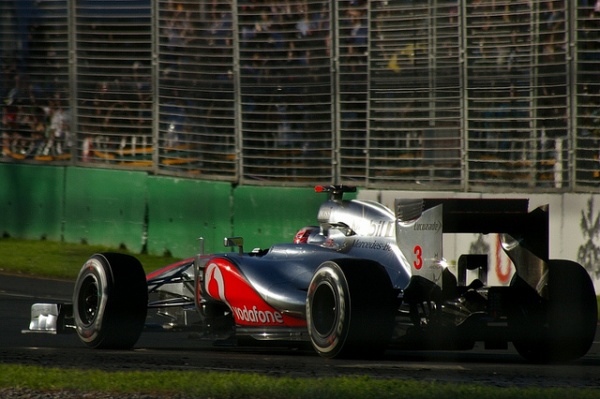 Jenson Button: I think, as we all know sat here, every win means a lot to you, and for us as a team it really shows how important the winter is. We’ve had a strong winter – yesterday’s qualifying really showed that – so it’s nice to come away with a victory today (at the) first race of the new season. The guys back at Woking have done an amazing job this winter. This will definitely help them to push harder into the extra hours in the morning when they’re making that extra little part. So, big thank you to everyone at Woking and the whole of the Vodafone McLaren Mercedes team for this victory here in Melbourne.

Sebastian Vettel: Yeah, nevertheless I think we would have had a good shot at him because it was very close and I was quite quick and I decided to stay out and he went to the pits so I think we would have had a crack even without the Safety Car, it would have been very close but surely it did help a little bit. Nevertheless, I think it was a great race. Quite a lot of fun. A good start initially but then I was surprised by Nico. He had a very good start. I got a bit stuck at the inside, I didn’t really have an option on where to go and he got past and then I had two Mercedes ahead. I got past Nico very quickly – which was a great manouevre, on edge. And then I was behind Michael where I had a mistake, went off in the first corner and then he decided to do exactly the same the next time I got close to him. That was good. And then, obviously, catching up the McLarens. I think all in all, congratulations to McLaren and to Jenson, he drove a fantastic race and was unbeatable today but I’m very happy to come away with second, it’s a lot of points. I think a lot of people would not have expected that after the result of yesterday. I think we had a better car in the race and the car seems to have a lot of potential and it’s up to us to get to it. Then we should be very close to these guys but I think it was a great day and thanks to everyone for pushing so hard and making the race result today possible.

Lewis Hamilton: No. First of all, congratulation to Jenson he did a fantastic job and congratulations to the team for doing a great job over the winter. Yeah it as just a bit of a tough day but we have plenty of races ahead so I just have to keep my head down.

Kimi Räikkönen: “It feels like I’ve never been away. Yesterday we made some mistakes which cost us quite badly so it could easily have been better in the race. I made a good start but then there was an accident in front of me at the first turn, so we lost a few places there as I had to almost stop and move onto the grass to avoid it. That made the race harder again as we had the speed, but a lot of traffic to get through. When you look at all these things we could have finished in a much better position. We had the safety car which I think actually hurt us a bit as well. Overall the weekend was far from ideal, but the car feels good and to come back to 7th means we at least come away with some points.”

Romain Grosjean: “I think we could have achieved a great result today. It’s frustrating as I really wanted to make the chequered flag and even the podium, but on the positive side the car is performing very well. I was keeping pace with the guys in front of me and everything was looking good. My start wasn’t great so we’ll need to have a look at the data. Then of course there was the collision with Pastor (Maldonado). From what I saw he braked far too late and hit my right front wheel which broke the steering and that was it; my race was over. The team deserved better because they have been working very hard, but by tomorrow morning it will all be a memory. We’ll move on to Malaysia now which is one of my favourite circuits and focus on getting a result there.”