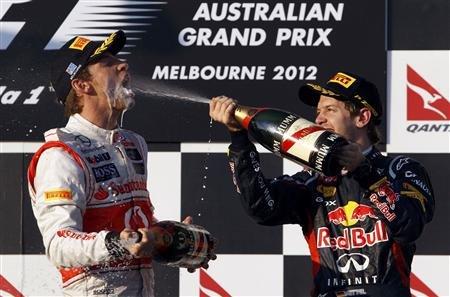 Jenson Button won the Australian Grand Prix with authority; beating teammate and pole-sitter Lewis Hamilton at the start and holding-off Sebastian Vettel in the closing laps.

Victory was Button’s third in Melbourne in the past four years, and the first all McLaren front row since the 2009 European Grand Prix in Valencia when Hamilton shared the front row with Heikki Kovalainen.

Button’s papito, John, was elated in his usual race-day pink shirt and claimed his son was “nervous, but excited nervous” before the race.

Michael Schumacher ran third in the early stages before grinding to a halt with gearbox issues.

Button and Hamilton were headed for a one-two finish after their second pit stop for tires; then the safety car was deployed as Vitaly Petrov parked his Caterham along the pit wall. This allowed Sebastian Vettel to change tires and he got the jump on Hamilton.

Vettel came within striking distance of Button late in the race but was happy to claim second step on the podium. The winner in Melbourne last year said, “I’m very happy with myself today – I think it was the most we could have achieved.”

Pole-winner Hamilton never had the pace to threaten Button and came under threat of losing his podium spot from local man Mark Webber who finished behind the Briton in fourth; his best place in his home grand prix. 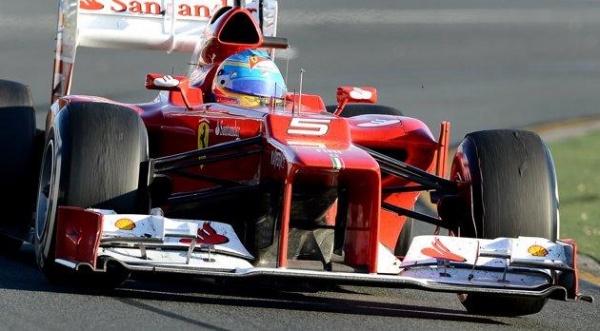 Take Five. Alonso, as usual, hauled in important championship points and is already asking the Italian team to change thinking to save the season. Teammate Massa crashed out with fellow Brazilian Bruno Senna.

Fernando Alonso, in his usual fighting spirit after the blues in qualifying, came home fifth. “I am happy I managed to bring home a useful number of points.” The Ferrari star came under intense pressure from the Williams of Pastor Maldonado in the final few laps of the race.

The Venezuelan driver crashed heavily on the final lap of the race after a tremendous drive. Even Alonso felt sorry for him. “When I saw he’d gone off the track I breathed a sigh. I am sorry for him, because it’s a real shame to finish a race like that.”

Kamui Kobayashi was sixth in his Sauber-Ferrari. 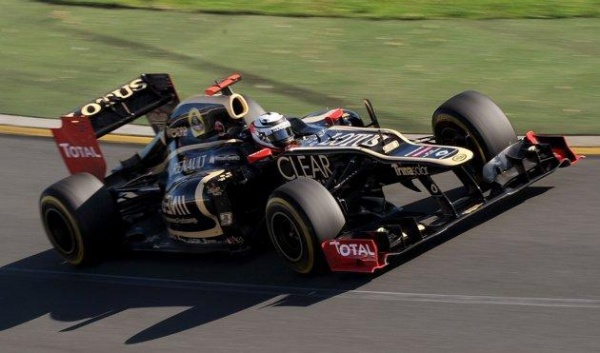 Clear Channel. Kimi’s comeback was hampered by communication issues but he was in the points at the end. Teammate Grosjean was impressive in qualifying but was taken out early in the race.

The Comeback Kid, Kimi Raikkonen, was seventh for Lotus. His teammate, Romain Grosjean, started from the second row but fell victim to wheel banging with Maldonado’s Williams shortly after the start.

Mexican Sergio Perez did a repeat of last year and made only one pit stop. He was rewarded with eighth place finish.

Daniel Ricciardo made it two Aussie mates in the points, taking ninth in his Toro Rosso, his first world championships points. Final point was snatched by Paul Di Resta for Force India. His teammate and another Comeback Kid, Nico Hulkenberg, for the second time in Australia was taken out on the opening lap.

The 58-lap race featured six world champions for the first time in an F1 event.

Vergne gone wild. F1 debutant Jean-Eric Vergne was impressive in Ferrari-powered Toro Rosso. He set the sixth fastest lap of the race and was highest placed of the three French drivers.

Two French drivers made their Grand Prix debut. Jean-Eric Vergne was first man out of points in 11th and surprisingly had the sixth fastest lap of the race. Charles Pic was 15th in his Marussia-Cosworth albeit two laps down. His teammate Timo Glock was 14th and a lap down.

F1’s Asian fusion follows next weekend at Sepang with the Malaysian Grand Prix.