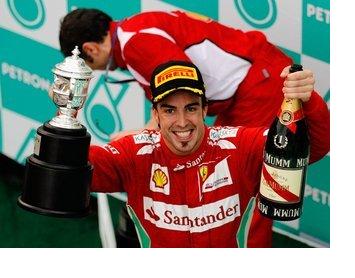 Perez with a glorious second place for Sauber.

Hamilton happy to take third under the circumstances.

Ferrari’s Fernando Alonso scored a dramatic victory in the Malaysian Grand Prix on Sunday when the Spaniard denied Sauber’s Sergio Perez a first Formula One triumph in a race turned on its head by the weather.

The race started in torrential rain and was stopped for 51 minutes after eight laps but Alonso took charge on its resumption to register a shock 28th career victory in a car that had been outpaced in qualifying in the opening two rounds.

“A big surprise today the win,” championship leader Alonso told reporters. “Our goal was to score as many points as possible. An unbelievable result, a great job from the team.”

Pole sitter Lewis Hamilton repeated his third place finish from the opening race of the season in Melbourne last weekend, with Red Bull’s Mark Webber in fourth and 2007 world champion Kimi Raikkonen fifth in his Lotus.

Australia race winner Jenson Button and world champion Sebastian Vettel both suffered mid-race collisions with the HRT of Narain Karthikeyan and finished outside the points.

Fernando Alonso: Yeah definitely, a big surprise today with the win. We were not competitive in Australia, we were not competitive here and our goal for this first race is to score as many points as possible. But today we did 25 so it’s an unbelievable result, so great job from the team and trackside I think we maximised the potential we have in our hands at the moment. Good qualifying yesterday going into Q3 and then today keeping calm in some extreme conditions I think, at the beginning with the Inters with a lot of water and then switching to the Inters and then switching to the dry tyres in the perfect moment with perfect pitstops. Congratulations to the team because I think they deserve this victory. It’s a tough time for us at the moment but this Sunday we will remember.

Sergio Pérez: I think so, I definitely think so. I mean, I was catching Fernando toward the end of the race, I knew I had to get him soon because all the sectors with the high speed I was losing already my front tyres with a lot of degradation going behind Fernando, so it wasn’t easy. Then I ran wide in the quick corner, I touched a kerb and I went to the dirty side. It was completely wet and that was the end of the win, probably. It was very difficult obviously to get Fernando but I think today the win was possible. I have to say the team has done an incredible job. They called me always on the right time, especially the first pitstop we did, it was really at the right moment. Unfortunately Fernando pitted one lap earlier than us, towards the end of the race when the track was already dry and he opened some gap there, and even then we managed to get him, the pace was fantastic, I was really quick. I have to say many thanks to the team, they have done a great job and I’m very happy for them.

Lewis Hamilton: I think we can be satisfied, definitely. First of all congratulations to Fernando and also to Sergio who both drove fantastically well. It was very tough to catch them. Yeah, of course we would have liked to have more points this weekend but yeah, I guess I can’t really complain. I’m on the podium for second week in a row so I’m pretty happy. I feel pretty fortunate that I was able to stay out of trouble with the conditions changing constantly. I think we did a great job.

Kimi Räikkönen: “It was a bit difficult today. It was my first time on the wet weather Pirellis and I didn’t know how the intermediate or wet tyres would react – I had only completed one installation lap on them before. I just tried to stay on the road and push as much as I felt comfortable with. When I changed to the dry tyres it took a couple of laps to get heat into them, and my visor was pretty dirty so seeing the dry line was difficult. Once I found my way I could push much harder. It was difficult to have another mixed weather weekend. The conditions changed a lot today so it was always a case of adapting and looking for grip. Overall, we seemed to have a pretty strong package again this weekend, so I’m relatively happy. A fifth today was okay, but we’re always looking for better results.”

Bruno Senna: I am really excited about the result today. I’m so happy that I have scored points for the team after a very tough race. It’s on days like to today that you can show what you can do in difficult conditions. I knew we had to attack after the restart, so it was very satisfying to push hard, not make any mistakes and to make my way up through the field. I’m so happy for everyone in the team.

Pastor Maldonado: It was very difficult today with conditions changing so quickly at the start. I had poor visibility in the pitlane so missed the pit box entry after the restart which dropped me down the order. I was then just pushing every lap and our pace was very consistent. I had a good race to come through from 20th to tenth with just two laps remaining. Bruno had a great race and we have both been able to show that the car is competitive.

Paul Di Resta: “The start of the race was a bit of a mess and it was all about trying to stay on the track and stay out of trouble. I did pretty well until Maldonado hit me just before the red flag, which spun me around and cost me about three places. At the restart our pace was very good on the intermediate tyres and we were able to get well up the order and stay with the leading group. As it dried out we switched to dry tyres at the same time everyone else did, which was the safe way to play it, and just tried to hold position in the points. We were a bit lucky with some of the issues for cars ahead, but in races like this you need a bit of luck and given where we started I think we can come away from here very happy with this result.”

Nico Hulkenberg: “I think today’s performance with two cars in the points is a great team result and I’m very happy to pick up my first points of the season. It was quite a complicated race and the rain certainly helped mix things up, but we made the most of our chances and made good calls on the strategy. I have to say that the wet conditions today were some of the worst I’ve raced in and the visibility was almost zero before the race was stopped. It was much better when the race restarted, but I struggled with the balance of the car on the intermediates, so it was just a case of trying to stay in the points and catch Vergne ahead.” 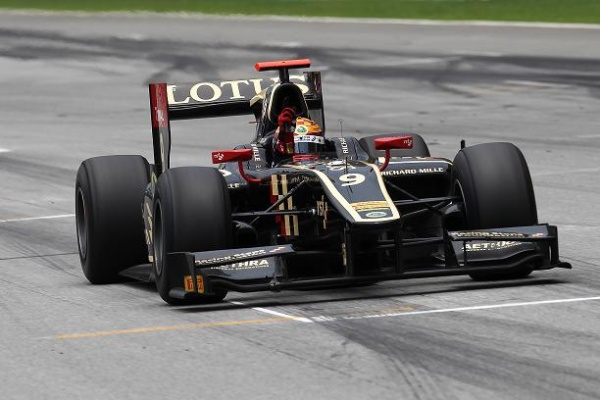 2011 GP3 Series runner-up James Calado has again proven today that he has adapted quickly and strongly to the GP2/11 car. The British sensation took a lights-to-flag maiden GP2 Series win in the first Sprint Race of the 2012 season in Malaysia. Starting from pole position, he controlled the rest of the race keeping his teammate Esteban Gutiérrez at bay and preserving his tyres until the chequered flag. In third, rookie Felipe Nasr scored his first GP2 podium.

When the lights went out in scorching temperatures, Calado and Gutiérrez made perfect gateways and both men were side by side at the entrance of Turn 1. The Brit however managed to keep the lead. Further behind, Nasr also made a great start and chose to take the outside of Turn 1 to pass Stefano Coletti. The Monegasque driver tried to regain his position a couple of corners later but went too wide and dropped to P9 behind Davide Valsecchi, but would pass the Italian and Luiz Razia before the end of Lap 1 to fight his way back to sixth.

At the front, Calado was busy trying to stay ahead of Gutiérrez with Nasr, Giedo van der Garde and Fabio Leimer in tow. On Lap 13, Valsecchi tried to make a move on Razia but went too wide and off the track. When he rejoined, Marcus Ericsson clipped the back of the DAMS car that went barrel-rolling at Turn 5. Both drivers got out of their cars and the track was rapidly cleared.

By then, Calado was 1.5s ahead of Gutiérrez, with the top five positions unchanged. The battle for P6 intensified between Razia, Coletti, Max Chilton and Nathanaël Berthon. As Razia lost a position to Coletti, Chilton tried to sneak in only to go too wide and rejoined behind Berthon. Yesterday’s race winner fought back and passed Coletti in the final corner on lap 17. Coletti, visibly struggling on his tyres, could not fend off the attack of Berthon whilst Chilton made his way back to the battling duo and passed them both for P8.

The fight continued on the following lap and it ended in tears for Coletti who could not match his rivals’ pace having to let Chilton and Berthon through. Meanwhile, Razia zoomed in on Leimer and overtook the Swiss for P5 again in the final corner. At the chequered flag, Calado crossed the finish line 2s ahead of Gutiérrez. Nasr in third finished 7s ahead of van der Garde. Razia, Leimer, Chilton and Berthon pocketed the final points.