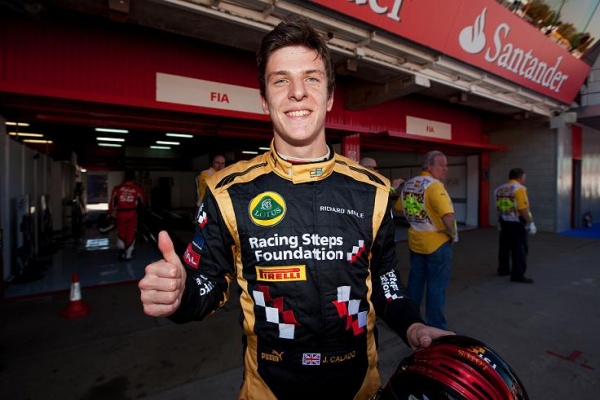 James Calado claimed his maiden GP2 pole position with a controlled but aggressive lap in the opening minutes of this afternoon’s qualifying session at the Circuit de Catalunya, leaving his more experienced rivals in the shade as he took the top spot in the blazing heat ahead of Fabio Leimer and Stéphane Richelmi.

The Briton’s 1:30.655 lap gave him a two tenths cushion over his closest rivals, with the gap closing slightly late in the session when Leimer improved his time. Calado, along with most of the grid, chose to go out early on the soft compound tyre to take advantage of the F1 rubber on the circuit, and the only question after the first few laps was whether the gamble taken by the few remaining drivers would pay off.

This morning’s fastest driver Josef Kral took to the circuit as most of his rivals came back into the pits, but he was unable to match his earlier performance. Marcus Ericsson and Fabio Leimer also delayed using their single set of option: the Swiss driver was an impressive P4 on his first set, and while the Swede was unable to improve his times, Leimer pushed up two spots but was unable to match Calado’s best lap.

With little chance to improve, many drivers used the remainder of the session as a bonus practice session ahead of tomorrow’s feature race, which will see Max Chilton, Giedo van der Garde, Fabio Onidi, Davide Valsecchi, Stefano Coletti, Jolyon Palmer and Nathanaël Berthon line up behind the top three. With conditions forecast to be much the same as this afternoon’s session, the race promises to be a scorcher.