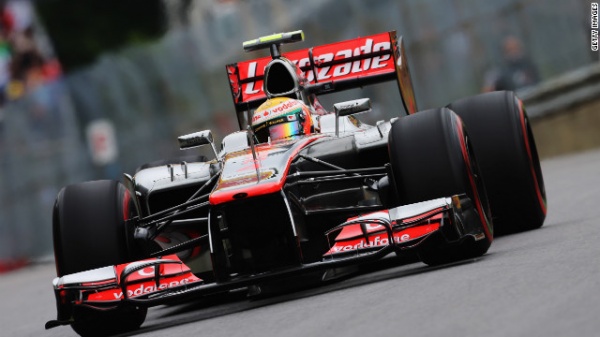 Ferrari gambles with a one stopper and fails.

Sauber’s one stop strategy pays off with Perez on the podium.

Lewis Hamilton won the Canadian Grand Prix for the third time on Sunday and made his McLaren Mercedes the seventh car in as many Formula One races to win this season.

Hamilton, the 2008 world champion, won in Canada in 2007 and 2010, but was bumped out early last year when his teammate Jenson Button claimed the win.

Vettel, starting from pole position for a second year in a row, held the lead until he pitted for super-soft tires after 16 laps, putting Hamilton in front until he went in a lap later. The Englishman took over the lead and passed Alonso on lap 20, with Vettel back in third spot.

Hamilton’s pitted again after lap 49 with fading tires, returning in third place behind Alonso and Vettel.

On fresh tires, Hamilton cranked up the speed and passed Vettel on lap 62 and Alonso one lap later to regain the lead.