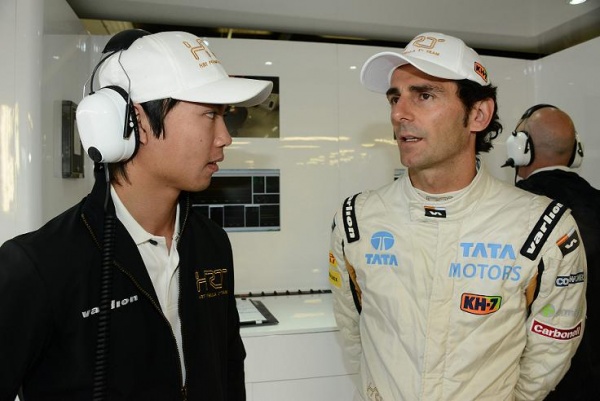 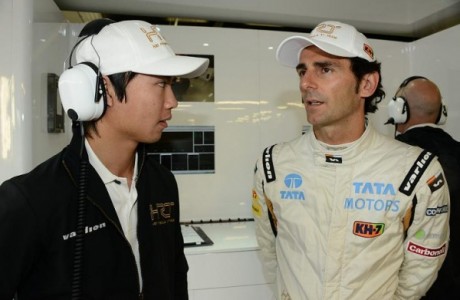 An agreement has been finally reached and HRT Formula 1 Team will be able to carry out its Young Driver Test at Silverstone next week after the British Grand Prix. This test will take place on Thursday the 12th and Friday the 13th of July at the legendary Silverstone circuit. 24 year-old Chinese driver Ma Qing Hua will be at the wheel of the F112 and will complete his first tests in a Formula 1 car.
After competing in international championships such as Formula Renault, A1 Grand Prix, Formula 3 or Superleague Formula, and winning the Chinese touring car championships in 2011, Qing Hua joined HRT Formula 1 Team’s driver development programme un April. This programme has included tests with cars from different categories such as World Series and GP2, besides working with a simulator and specific physical preparation ahead of the demanding challenges of F1. During these tests, the Chinese driver has shown firm evidence of his talent behind the wheel, learning capacity and commitment, and the team is confident that these upcoming tests will be the next step in his journey to Formula 1.
For those who would be interested, Ma Qing Hua will be available to the media on Sunday the 8th of July at 10.00h in the team’s hospitality unit.
Ma Qing Hua: “I’m very happy that the day has finally come and I will be able to step into a Formula 1 car for the first time with HRT Formula 1 Team. And I want to thank everyone who made it possible for me to be here today, my compatriots who support me, and the people who made it possible for these tests to take place in Silverstone. The last few months have been intense as I have been doing a lot of tests on the track and off it, which have helped me to improve as a driver and take on this challenge from a better position. I’ve worked hard to make it here but this journey is only getting underway”.
Luis Pérez-Sala, Team Principal: “The fact that these tests will finally be able to take place at Silverstone is great news for us because it fits perfectly with the next step that we had planned for Ma Qing Hua’s development programme. In the last three months, we’ve been working with Ma on different aspects: testing on track with cars from different categories, carrying out tests on the simulator and working on specific physical preparation to be better prepared for this demanding challenge. We were aware of his ability but, once more, he has shown his professionalism, attitude and sensitivity, so we’re sure that he will continue to progress as a driver in these Formula 1 tests”.