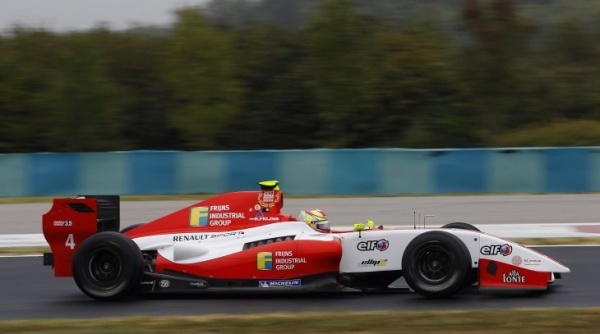 Robin Frijns (Fortec Motorsports) increased his championship lead with victory at the Hungaroring, and in doing so became the first driver to record three victories in this season’s Formula Renault 3.5 Series. Frijns led race one from start to finish to win from Kevin Magnussen (Carlin) and Jules Bianchi (Tech 1 Racing). The 2011 Eurocup Formula Renault 2.0 champion now holds a 16-point lead over Jules Bianchi, who moves up to second, and is 29 points clear of Sam Bird (ISR).

After an extremely hard-fought qualifying session, Robin Frijns became the third driver this year to claim three pole positions after Kevin Magnussen and Jules Bianchi, who qualified in second and third respectively.

The sun finally came out as the 26 cars lined up on the starting grid, against the backdrop of a stunning air display. Robin Frijns reacted quickest as the lights went out to lead into turn one, ahead of Kevin Magnussen, Jules Bianchi, Arthur Pic and Antonio Felix da Costa (Arden Caterham).

Robin Frijns pushed hard in the early stages of the race as he looked to pull away from his rivals. Kevin Magnussen managed to keep pace with the leader, while Jules Bianchi gradually lost contact with the pair. Arthur Pic, in fourth, headed up a compact chasing pack, with Antonio Felix da Costa, Nico Müller (International Draco Racing), Carlos Huertas (Fortec Motorsports), Marco Sorensen (Lotus) and Alexander Rossi (Arden Caterham) all on his tail.

By the halfway stage, Robin Frijns’s lead over Kevin Magnussen had levelled out to around two seconds, with the same margin separating the Dane from Jules Bianchi. The closing stages of the race were fairly straightforward for the leading trio, and it was Robin Frijns who eventually took the chequered flag for his third win of the season, having led from start to finish. Kevin Magnussen, for his part, came home in second to return to the points positions, having failed to score at all at Silverstone. Jules Bianchi finished third to move up to second in the championship standings, 16 points behind leader Robin Frijns. Sam Bird, however, could only manage a disappointing tenth place.

Robin Frijns: “It’s been the perfect day, with a good performance in qualifying and a race victory. The race wasn’t easy, as I had to contain Kevin Magnussen. Sixteen points is a good lead, but it’s not enough. Since the start of the season, I’ve often been unlucky in one of the two races and I know that Jules Bianchi and Sam Bird don’t give an inch. So I’ll need a second good day tomorrow to make this weekend a success.”

Kevin Magnussen: “On the whole, I’ve lacked consistency this year. Sometimes things have gone really well, and I’ve won both races, while other times things haven’t gone so well, like with the two retirements at Silverstone. So, my goal now is to build on this and score points in every race. I’m pleased with this second place.”

Jules Bianchi: “The championship remains open, but Robin Frijns did another great job today. It’s not going to be easy if he maintains this form. As for me, we were on the pace in qualifying but not during the race. I made a few mistakes as I couldn’t keep up with the pace, and we’ll need to do some work so that we can bounce back tomorrow.”