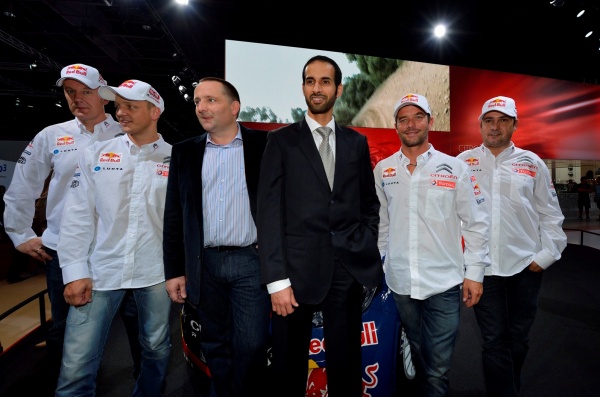 Sheikh Khalid, like Hirvonen and his co-driver Jarmo Lehtinen, will contest the full WRC season while the eight-timesWorld Championship-winning crew of Loeb and Daniel Elena will join them in a partial racing programme.

The other crew who will replace Loeb and Elena for the rest of the season will be announced by Citroen in due course as the new Citroen Total Abu Dhabi World Rally Team looks forward to the legendary Rallye Monte-Carlo, opening round of the 2013 WRC in January.

Strong Abu Dhabi branding on each of the team’s three Citroën DS3 WRCs, and support vehicles, will create the dominant visual impact, emphasising a new partnership and a commitment from the UAE capital at the pinnacle of world rallying.

The five-year agreement with Citroen, which secures the manufacturer’s WRC future, has been signed by Abu Dhabi Racing (ADR), a newly established Abu Dhabi-based company working on a number of initiatives designed to bolster the emirate’s presence in global motorsport.

Sheikh Khalid, who is the ADR chairman and competed in the WRC from 2007-2011, said: “Naturally, I am delighted to have the chance to return to WRC action, but more importantly this is a unique opportunity to carry the Abu Dhabi brand to a worldwide audience.

“Abu Dhabi is already established as one of the world’s premier Formula One destinations, and enjoys massive exposure as a result of the F1 Etihad Airways Abu Dhabi Grand Prix, and other events staged at Yas Marina Circuit.

“The Abu Dhabi brand will now be projected more powerfully than ever before in the World Rally Championship by the most successful works team in WRC history, and the partnership with Citroen can lead to many more benefits for Abu Dhabi Racing, and the Emirate as a whole.”

While the WRC programme is a major part of its activities, the main objective for Abu Dhabi Racing is to increase Emirati participation in various global motorsport series, including off-

This will be done through strategic relationships with Abu Dhabi-based motorsport stakeholders,  including Abu Dhabi Motorsport Management (ADMM), Yas Marina Circuit and

Sheikh Khalid’s colleagues on the board of Abu Dhabi Racing are Khalid Bin Shaiban, Vice Chairman, ADMM, and Khalid Al Qubaisi, who has international competitive experience in the

Porsche Supercup series and was part of a four-driver ‘Abu Dhabi by Black Falcon’ team which won this year’s Dubai 24 Hour race.

Citroen confirmed at last week’s Paris Motor Show that, in facing tough economic times, it had ‘taken the decision to remain involved in motorsport in order to support its determined and

“In this context, we are particularlyproud to welcome Abu Dhabi on board,” commented Yves Matton, Citroën Racing Team Principal. “This partnership will provide us with the means of continuing our programme and entering three DS3 WRCs in 2013.”

Once again this year Citroën have dominated the World Rally Championship and look set to capture their eighth manufacturers title, while Hirvonen and Lehtinen are the only crew who can now prevent Loeb and Elena from winning their ninth consecutive crown.