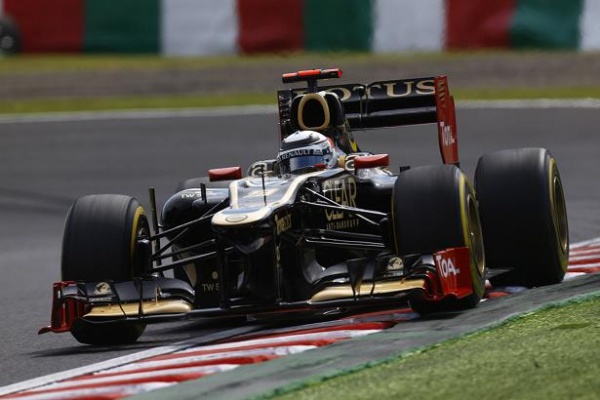 F1WEEKLY PODCAST NUMBER 602- CLARK AND NASIR REFLECT ON THE LATEST F1 NEWS AND HERE ARE SOME F1 DRIVER QUOTES ON QUALIFYING AT THE JAPANESE GRAND PRIX.

Nico Hulkenberg: “The build-up to qualifying was quite intense because the guys were working hard to repair my car after the accident this morning. It was not a big impact, but the angle was unfortunate and there was quite a lot to fix – so all credit to the boys who got me out with enough time to set a time in Q1. The car felt good straight away and we made it through to Q3, which was always the target. We then took a strategic decision to save tyres so I didn’t set a time. That opens up the strategy for tomorrow, especially because we knew I would get a five-place grid penalty for changing the gearbox. There’s still a chance to get points tomorrow if we can make our strategy work.”

Paul DiResta: “It was quite a tough session with traffic today and even on my quick lap in Q2 I was slightly compromised in the second sector. I locked a wheel and it may only have cost half a tenth, but that’s how close the margin was to the top ten. I think given what happened yesterday with losing so much track time we can be pretty happy with our performance today. We have got ourselves up there, close to the top ten and in with a chance of points. For tomorrow it’s clear that tyre wear will be a big issue for everyone, but hopefully we can use the strategy to challenge the people in front. There are some question marks going into the race because I’ve done no high fuel running, but we have data with the other car.”

Kimi Räikkönen: “I spun. I was on a good lap and I was pushing – maybe a little too hard – and lost the rear. It’s a shame as the car feels the best it has all weekend. If the car’s good tomorrow we should be able to move forwards. Let’s see what happens.”

Romain Grosjean:“Yesterday we had two tricky sessions, so to have both cars in Q3 is a good recovery. We knew it would be very tight in qualifying and I think we could maybe have been one place higher with a cleaner run through the first sector, but the leaders were too quick today. We’re lacking a little bit of downforce at the moment, but with a few minor adjustments overnight and the right strategy I think we can take home a good haul of points tomorrow.”

Pastor Maldonado: We’ve been working hard to make the car more competitive but for one reason or another, we just couldn’t pull it all together today. We need to try to understand why, but tomorrow is going to be a long race so I’m quite optimistic. The gaps are so close and our longer run pace looks encouraging, so we aim to push for some points tomorrow.

Bruno Senna: It was a frustrating qualifying session as I was held up on my final timed lap at the end of Q1 and couldn’t post the time that I wanted. However, it’s a long race tomorrow and although this track is difficult to overtake at, we’ve been in this position before and so we’ll give it our best shot to score some points in the race.

Heikki Kovalainen: “For me I’m pleased with what I got out of the car today. On my second run I was following Hulkenberg on the out lap and wasn’t quite able to get my tyre temperatures up to the optimum level so in the first sector on the quick lap I had a little bit of understeer, but the other two sectors were about as good as they could have been. The car’s pace on Sundays has been pretty good all year so the aim now is to have a strong race and be in the right place to take advantage of anything that happens ahead. Really, for me, I’m not worried about the cars behind me. The team is doing everything they can to keep progressing and I want to do whatever I can to help them. Laps like today, while not as quick as we’d like to be, are what I can do – not make mistakes, get everything out of the car and help push the team forwards in the right direction.”

Vitaly Petrov: “In FP3 we found that the car wasn’t working as well as it had yesterday in FP2 when it had felt pretty good. When we went through the data we found that the tyre temperatures weren’t coming up as well as we’d have liked and we made a couple of changes for qualifying that immediately improved the setup. On my first run the car felt much better and on my second run I was at least 7/10ths up on my previous quickest lap, but I made a mistake in turn 14 and that cost me a lot of time. Despite that I’m not disappointed with where I finished. Heikki’s lap shows that we have a gap of around 6/10ths to the cars behind and while they’re doing a good job in trying to catch up with us we’re also working as hard as we can to pull away from them and try and fight with the cars ahead. Tomorrow’s race gives us a chance to do that, and with good strategy and careful use of the tyres I think we can have a decent Sunday.

SEBASTIAN VETTEL, Position: POLE POSITION, (3rd Practice – P1, 1:32.136)
“It was good we got the time on the first run, with the yellow flags coming out later. We had a phenomenal balance in the car and I had the feeling we could go with the track today. We only needed one run in every session, which doesn’t happen all the time, but it’s very enjoyable around here when the car works how you wish, especially on low fuel and fresh tyres. It’s very special. Yesterday evening I wasn’t too happy as I was losing time in the first sector, but I found my mistake and in today’s practice session it worked straight away, I don’t know why I didn’t do it in previous years and it shows you never stop learning. Tomorrow will be interesting; it’s hard on tyres here, so we will need to work to stay where we are. ”
MARK WEBBER, Position: 2nd, (3rd Practice – P2, 1:32.371)
“That was a pretty solid session. We knew it was going to crank up in Q3, but I’ll tell you, this place on low fuel with new tyres is something else. I was pretty happy with my first attempt, apart from the hairpin, but Sebastian had that couple of tenths and I thought ‘fair play’, it was a competitive lap from him. Overall both of us were very competitive in qualifying and that puts in good stead for tomorrow. All the hard work from the factory is paying off. The main day though is tomorrow, that’s where the points are.”
DAYTONA 24 HOURS