This year Championship is deeply conditioned by outsiders and “second rows”, as proven by Massa and Kobayashi’ podium finish. It is clear that the supremacy shown by Red Bull during the race, make us think about 5 hot GP and make it clear that the fight is between Alonso and Vettel.

It’s a pity that Ferrari scored zero points, even if in this way, all the negativities experienced by drivers during the racing season will be well balanced. Starting from the next race in Korea , a mini-championship made up of 5 races will start.

In Maranello there will be so much work to do, because Vettel’ overwhelming power is alarming. Historically speaking, the Japanese track has never be hostile to the Italian team, as proven by the Brazilian driver’ second place. The Spaniard could have gained many more points. It will be so important to regain the way to victory. Naturally, Alonso is not free from being responsible for what happened, but Kimi would have never been able to pass him in that point. I think responsibility should be shared to 50%. They’ll have to roll up their sleeves. If you start from a front row, it will be harder for you to get involved in accidents.

Four points ahead are few, but they’re enough to maintain the leadership. During the last two-three races they’ve seen their advantage going down and down, so now it’s time to keep on working hard. Massa ’ performance was very good and he scored important points. He has proven to be on the rise, creating hardship to Ferrari team who, in my opinion, is thinking about a long-range solution which could go beyond the 2013.

On the contrary, McLaren is backwards. When so important changes occur during a racing season’ hot phase, destabilizations can be created. Probably, Hamilton ’s choice has created problems inside the team. The clarification made by the English team after qualifying may sound as a wake-up call. Hamilton and Webber are now out of contention for the World title, even if the Englishman will have to try to regain points  to get at least the third place inside the Championship.

The Australian driver’ race was ruined by the umpteenth “Grosjean-style” accident. I just can’t understand where he was trying to go. If he hadn’t found Webber on his way, he would have definitely gone off the track…….Despite all the amendments, he just keeps on making the same mistakes. He’s a fast driver, but the mistakes he makes are too heavy both for himself and for the team. The Lotus may fight for the third place. The Lotus is proving to be the thermometer of the Championship, even with regard to negative events.

Sauber’ great season continues. Unfortunately, a trivial mistake made by Perez at the hairpin, avoid the team to score further points. This car’ performances are so good and Kobayashi wasn’t able to withstand Button’ attacks, getting a podium finish for the first time, in front of his own audience. After Toyota , Honda and Bridgestone’ retreats, Japan needed to recapture that nationalistic spirit on which it can cheer..

Great race also for Force India , Williams and Toro Rosso. Maldonado didn’t make any mistake and Ricciardo withstood Schumacher’ attacks. In the next GP, Sauber and Lotus can become part of  the points sharing and, obviously we don’t have to forget about McLaren. 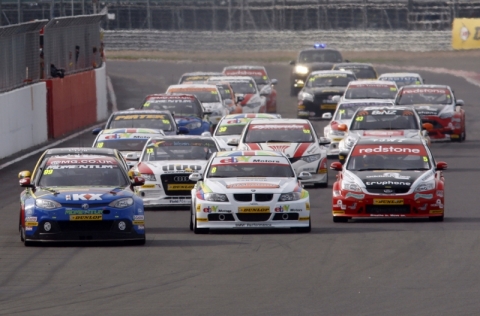 PLATO & JACKSON SHARE WINS AT SILVERSTONE TO
SET UP FOUR-WAY BRANDS HATCH TITLE-DECIDER
Jason Plato, with two wins, and Mat Jackson shared the victories in three astonishing Dunlop MSA British Touring Car Championship races in front of a mammoth 30,000 crowd at the Silverstone circuit in Northamptonshire today. Ultimately four drivers – Gordon Shedden, Plato, Matt Neal and Andrew Jordan – will go into the 2012 season’s final three races, on Brands Hatch’s legendary Grand Prix circuit in a fortnight (20/21 October), with a chance of being crowned Champion of Britain’s premier motor racing series.
After achieving his fifth pole position of the year – also his third in a row – with a qualifying lap record on Saturday, Oxford’s Plato went on to win today’s first race in his MG KX Momentum Racing MG6, but only after Jackson’s Redstone Racing Ford Focus cruelly retired from the lead with just a few laps to go.
Finishing second and third were Inverness’s Dave Newsham in his Team ES Racing.com Vauxhall Vectra and, with his first podium result, Jackson’s team-mate Aron Smith from Dublin. Fife’s Shedden took seventh in his Honda Yuasa Racing Team Honda Civic but Worcestershire team-mate Neal and Lichfield’s Jordan, in his Pirtek Racing Civic, both retired.
Warwickshire’s Jackson then won race two ahead of Hook’s Robert Collard (eBay Motors BMW) and Newsham with a quite incredible drive from 17th on the grid, this time after Plato retired from the lead. Jackson also set a new race lap record as he notched up the first victory for his squad’s NGTC-spec Focus. Shedden was again seventh with Jordan ninth while Neal suffered another retirement when his car spectacularly caught fire.
It was then Plato’s turn to wow the crowds as he came through from 20th to win race three ahead of Jackson and Collard. Shedden was sixth and Jordan seventh but, almost unbelievably, reigning Champion Neal retired again, this time after being forced off the track into a barrier.
As a result, Shedden still leads the table by 15 points from Plato who has moved past Neal into second overall. Neal is 31 behind Shedden and Jordan 61 adrift with a possible maximum of 67 still available from ‘Finals Day’.
An ecstatic Plato commented: “Despite the retirement in race two this is still one of the best days in my BTCC career. We’ve made more progress with our MG6 – in fact it’s a rocketship – and our tails are well and truly in the air. For MG to go into the final round with a chance of lifting the title in its first year back in the championship is fantastic and I really believe we’ve got the Honda boys worried.”
Shedden, from Dalgety Bay and who is aiming to become Scotland’s first BTCC Champion since John Cleland in 1995, said: “We knew this was going to be our bogey circuit so today was about picking up what crumbs we could – I don’t think we could have wrung any more out of the car. I expect us to be fully back on song at Brands Hatch which has got lots of high-speed corners where our Civic comes into its own. I’d take points in the bag any day and I’m feeling good about our chances.” Neal added: “Today has been a shocker but I’m not out of it yet – there are still a lot of points to be won at Brands and I’ll be going there with all guns blazing. Jason’s MG will be strong there and our main objective is to get a Honda over the line in first. Gordon is obviously better placed to do that so is the priority…”
Jordan will also go to Brands still with a healthy lead in the Independent Drivers Championship, although can still be caught by Collard, Jackson and eBay Motors’ Tom Onslow-Cole. He admitted: “Let’s be realistic. There’s no way the outright championship is possible so my focus will be to stay ahead of my Independent rivals. Rob has effectively halved the gap to 28 points but there are only 60 left at Brands and our car will be much stronger there.”
Jackson was delighted with his results today which marked his return to the podium since Thruxton in April. “A win from 17th, a second and a new lap record in a car that is still only two months old and it could have been two wins… I couldn’t be happier for everyone in my team,” he said.
Elsewhere Honda/Dynamics is all but assured the coveted Manufacturers/Constructors title. Similarly the Honda Yuasa Racing Team is a red hot favourite to retain the outright HiQ Teams Championship although can still be caught by eBay Motors. But it will be a three-way fight for the Independent Teams Trophy at Brands between new leader eBay Motors, Pirtek Racing and Redstone Racing – just ten points cover the trio with a potential 60 up for grabs in the finale.
Meanwhile a number of drivers were punished today by BTCC officials for on-track indiscretions. Race 1: Andy Neate, fined £500 and three penalty points on his competition licence for an incident with Andrew Jordan; Tony Gilham, official reprimand and two penalty points for an incident during a safety car period; Lea Wood, fined £500 and three penalty points for an incident with Liam Griffin. Race 3: Lea Wood, fined £500 and three penalty points for an incident with Matt Neal; Rob Austin, excluded from the results and four penalty points for an incident with Daniel Welch; Frank Wrathall, fined £500 and three penalty points for an incident with Dave Newsham; Andrew Jordan, received a verbal warning for making contact with another car.
DAKAR RALLY