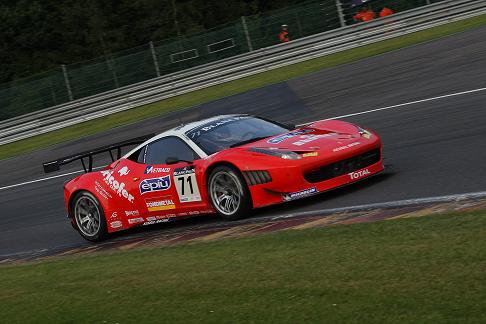 GT  – DAVIDE RIGON  AT NAVARRA TO END UP THE SEASON BRILLIANTLY

Davide Rigon gets ready to drive his 500 HP Ferrari 458 to race in the Blancpain Endurance Series’ final racing event, scheduled for this weekend on the Navarra track.
After taking part in the Renault 3.5 World Series competition and having a hard racing weekend at Nurburgring, during which he was involved in a clash at the first corner, the talented Italian driver of Kessel Racing Team gets ready to face the final race of the season with the aim of getting onto the podium again.

“ In these months the car has improved significantly and only few unlucky episodes have denied further satisfactions. At Nurburgring we demonstrated  all the abilities to get onto the podium, but just after few kilometres a Porsche led us off track. I’ll go to Spain with a great desire for redemption, so me and my teammates will try to conquer the podium again to end up this racing season at best. It has been a high-level championship as I expected. Driving a Ferrari is always exciting and, of course, a great responsibility”, says Davide Rigon.

Awill consist of two s usual, the weekend racing days: Saturday is devoted to free practices which are divided into three sessions to last 30 minutes each and to pre-qualifying. Qualifying will be held on Sunday morning (11.00-12.00) and the three hour-long race will start at 14.30

GT  – Davide Rigon  at Navarra to end up the season brilliantly 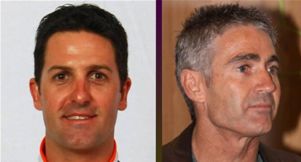 WHINCUP AND DOOHAN PAIR UP FOR TEAM AUSTRALIA

Triple V8 Supercar champion Jamie Whincup and five-time 500cc MotoGP world champion Mick Doohan will compete for Team Australia at the 2012 Race Of Champions in Bangkok, Thailand Whincup, fresh from victory in last weekend’s classic Bathurst 1000, will make his ROC debut while Doohan returns for his fifth appearance The Australian duo join a field featuring Formula 1 world champions Michael Schumacher and Sebastian Vettel for ROC 2012 on December 14-16
Team Australia will have a star-studded pairing for the 2012 Race Of Champions as triple V8 Supercar champion Jamie Whincup lines up alongside motorcycling legend Mick Doohan at Bangkok’s Rajamangala Stadium on December 14-16.

The end-of-season contest, which is being staged for the 25th consecutive year in 2012, brings together the world’s greatest drivers from motor sport’s main disciplines – including Formula 1, world rally, touring cars, Le Mans, Indycar and the X-Games – and sets them free to battle head-to-head in identical machinery. Drivers pair up for the ROC Nations Cup, this year scheduled for Saturday 15 December, before the individual Race Of Champions on Sunday 16 December.

Whincup has dominated Australia’s popular V8 Supercar series of late, taking the title in 2008, 2009 and 2011. He also leads this year’s championship after he took victory in the classic Bathurst 1000 for the fourth time at the weekend, this time by just 0.3s. Now he will become the first Aussie V8 racer to appear at the Race Of Champions, earning the chance to take on motor sport’s biggest names from all over the globe.

Doohan is of course better known for his exploits on two wheels following a career including over 50 wins and five straight 500cc MotoGP world championships in the Nineties. But he knows how to handle four-wheeled machinery too and this will be his fifth appearance at a Race Of Champions event.

Doohan will team up with Whincup in a ROC Nations Cup field that already features a total of nine Formula 1 world championships courtesy of Team Germany’s Michael Schumacher and Sebastian Vettel, who also took victory in last weekend’s Japanese Grand Prix. They will be joined by plenty more motor sport legends in the run-up to December’s event in Bangkok.

Whincup said: “Having watched all the greatest racing drivers compete and have so much fun driving world class cars on my television from Down Under, I couldn’t be any more excited about participating for my first time at the Race Of Champions in Bangkok this December. Being a ROC virgin I am not setting my expectations too high but I will have some fun and hope my big Aussie V8 experience helps me.”

Doohan said: “I’m looking forward to racing with Jamie for Team Australia as we only live a kilometre away from each other on the Gold Coast. The Race Of Champions is a fun event where it’s friendly off the track but the goodwill evaporates when we’re waiting to blast away from the start line. As usual I’ll be aiming to prove that anyone underestimating us bikers is making a big mistake…”

Race organiser Fredrik Johnsson added: “We’re delighted to have Team Australia back in the ROC Nations Cup for the first time since 2009. Mick is a true legend of his sport who always gives the car specialists a run for their money and we are very excited to have Jamie on board. We are always looking to expand ROC’s horizons and this is the first time we will have a V8 Supercar champion in our field. It will be fascinating to see how they get on against the world’s best racers in Bangkok.”

Drivers confirmed for the 2012 Race Of Champions so far: