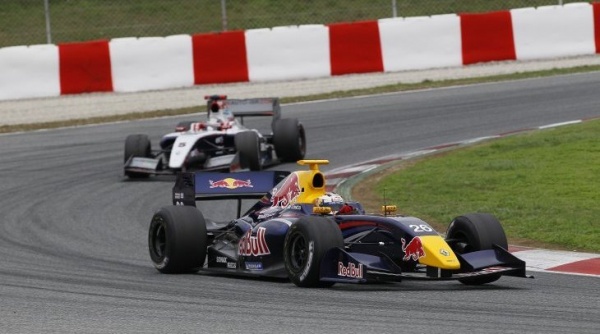 Antonio Felix da Costa (Arden Caterham) has been in impressive form since breaking into Formula Renault 3.5 Series, and the Portuguese served further notice of his talent on Saturday, making a late dart past Sam Bird (ISR) to snatch his third win of the season. Having made a perfect start, the Briton had to settle for second, while Robin Frijns (Fortec Motorsports) took third to move into the points lead, ahead of Jules Bianchi (Tech 1 Racing), who suffered a last-lap mishap.

The yellow and red flags were out in force during a stop-start qualifying session, though the interruptions did not prevent championship leader Jules Bianchi from seizing his fifth pole of the campaign, ahead of Antonio Felix da Costa, Kevin Magnussen (Carlin) and Sam Bird. Second in the standings at the start of the day, Robin Frijns could only qualify in sixth.

Antonio Felix da Costa made the most of a slow start by Jules Bianchi to grab first as the lights went out, though Sam Bird was in the right place at the right time at turn one and promptly relieved the Portuguese of the lead. Right behind them in third was a surging Robin Frijns, with Kevin Magnussen fourth and poleman Jules Bianchi suddenly down in fifth.

While Antonio Felix da Costa clung on to Sam Bird’s tail, Robin Frijns pulled away from Kevin Magnussen, who had in turn pulled out a gap over Jules Bianchi. Behind them Will Stevens (Carlin) and Kevin Korjus (Lotus) diced it out for sixth.

As the laps went by, the front two pulled ever further away from Frijns, Magnussen and Bianchi, who were engaged in an increasingly tight scrap, the Frenchman getting right on the tail of the Dane and the Dutchman, with Will Stevens and Kevin Korjus not very far behind either.

Antonio Felix da Costa and Sam Bird were treading much more carefully up ahead, though with 12 minutes remaining the Portuguese dived past the Briton on the final chicane and sped off to make it three wins for the season, with Bird settling for second and Robin Frijns doing likewise for third.

To their rear Jules Bianchi was doing all he could to grab fourth from a determined Kevin Magnussen, the Frenchman making a last-lap assault on the Dane that ended with the two of them spinning off. Both were able to resume, however, Magnussen coming home in fifth and Bianchi seventh, the Frenchman now trailing new championship leader Robin Frijns by four points heading into Sunday’s title-deciding race.

Antonio Felix da Costa: “This win is reward for all the work we’ve been doing with the team since I came into Formula Renault 3.5 Series. I don’t want to get involved in the championship race, and I’m just trying to stay out of trouble and not hit anyone. I got past Sam (Bird) fair and square, which is the important thing.”

Sam Bird: “My tyres went after three laps. Antonio could see that and he waited until the time was right to make his move. The championship could have been all over for me today, but I’m still in with a chance of clinching the title tomorrow. We now know who the top three are going to be. We just have to wait and see what the order will be.”

Robin Frijns: “I needed a good getaway from sixth and that’s just what I got. When I realised I couldn’t keep up with the front two I just focused on Kevin Magnussen. I made sure of my place at the end of the race and I’m on top in the standings again, though there’s still all to play for tomorrow.”

After the first two races of the weekend, things got tense again, but eventually, the favourite prevailed: for Daniel Juncadella (Prema Powerteam), a fourth-place finish at the 4.574 kilometres long Hockenheimring Baden-Württemberg was enough to secure the Formula 3 Euro Series’ title. Victory went to Swede Felix Rosenqvist (Mücke Motorsport), who finished ahead of his second-placed team-mate Pascal Wehrlein (Mücke Motorsport). Guest driver Alex Lynn (Fortec Motorsport) was delighted with third place.

At the start, Felix Rosenqvist took the lead from Daniel Juncadella. On lap seven, Wehrlein, who ended the season as the best rookie and runner-up, overtook Juncadella and started closing the gap to race leader Rosenqvist. He didn’t need long to close the gap, but he couldn’t find a way past the Swede. Meanwhile, Juncadella lost a place to Alex Lynn, but managed to keep Lynn’s team-mate Felix Serralles (Fortec Motorsport) at bay. For Juncadella, that was enough to secure the title following a pair of retirements due to technical reasons in the first two races.

Daniel Juncadella (Prema Powerteam): “The weekend wasn’t like I had expected it. After the technical problems I had yesterday, my team had been looking for the mistake all night long and almost replaced everything. Today, I drove clever more than anything else. I let Pascal and Alex past without any defence, because I knew that fourth place would be enough. Having the Formula 3 Euro Series’ title on one’s CV is something very valuable.”

Felix Rosenqvist (Mücke Motorsport): “There is no better way to end a season than with a pair of wins and two pole positions. Pascal put a lot of pressure on me today, but I managed to bring victory home without a real battle. Congratulations to Pascal for winning the rookie title and to Daniel for winning the Formula 3 Euro Series’ title.”

Pascal Wehrlein (Mücke Motorsport): “Of course, I would rather have won, but I think, second place is a good result, too. It has been a good season for me. I am happy to become runner-up as a rookie in such a strong series like the Formula 3 Euro Series.”

Hockenheim. Bruno Spengler (BMW) is the 2012 DTM champion: in a thrilling season finale at the Hockenheimring Baden-Württemberg, he claimed victory in the race after 42 laps and thus claimed the DTM championship crown for the first time in his career. Gary Paffett (Mercedes-Benz), who had led the drivers’ standings prior to the finale, finished second behind Spengler and is runner-up. Eventually, Paffett (145 points) was four points down on the Franco-Canadian (149 points). Augusto Farfus (BMW), who started the race from pole position, finished third at Hockenheim. A full press release with quotes will follow shortly.