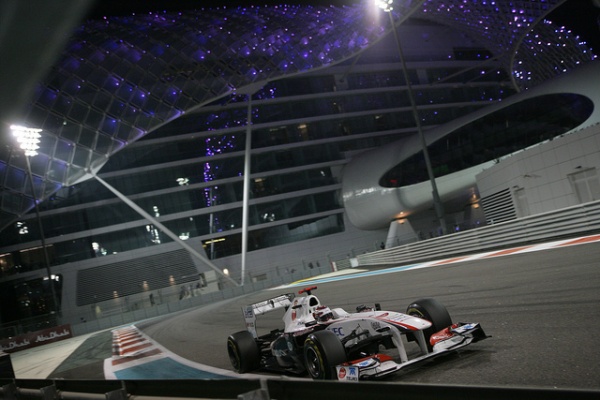 Sebastian Vettel: “In just three years, the race has grown to be one of the highlights of the season. Starting at dusk and finishing in the dark makes it something unique and impressive. I have special memories of the circuit; in 2009 I won there and then repeated the victory in 2010 to win my first World Championship, so it’s an event I will never forget. The circuit itself is impressive: 5.5km long, with large run-off areas and a pit lane exit that goes through a tunnel to the other side of the track.”

Mark Webber:  “I like the twilight element to the race – starting in the day and finishing at night. The facilities are world class. For the track itself, you need good traction – there are slow and twisty corners, as well as a good top speed. The race has a great atmosphere and it looks good on TV for the fans at home. It’s a phenomenal spectacle and I’m looking forward to racing there.”

Giedo van der Garde (driving FP1 in Vitaly Petrov’s car): “Abu Dhabi’s the first track I’ll be driving on in FP1 at this stage of the season that I’ve raced on before. With the obvious limits we work under in FP1 that’s a big advantage as it means I’m not having to learn my way around on my first couple of laps, and as we’re usually doing somewhere between 20 to 25 laps in first practice it means I can help the team even more right from the first run.

“I have to say I’m really enjoying the work I’m doing with the team and it’ll be even better in Abu Dhabi. In India my times were closer to my team mate than in any other session I’ve done and I think I’m really developing a good relationship with the engineers and the whole team. It’s obviously a bit tricky to really show what you can do when you have just one set of tyres and not much more than about 25 laps, but these sessions aren’t about showing how quick I can go, they’re about working to the program set by the team and continuing to learn as much as I can about the step up from GP2 to F1. After the Abu Dhabi race I’ll be staying on for the young driver test, and that’ll be another really good step forward in my development – two full days in the car on a track I’ve already driven on, and with a group of people who I’ve worked closely with for the last couple of months will give me a great chance to help the team get as much as they can from the test, and give me the opportunity to keep developing without some of the constraints of a race weekend FP1.”

Heikki Kovalainen,: “Abu Dhabi’s a track that I think everyone looks forward to getting back to. It’s just about the best overall venue for F1, with some of the best facilities for the teams that we see all year, a track that has some good technical challenges and pretty much perfect weather.

“As my girlfriend’s parents now live in Abu Dhabi we’ve spent quite a bit of time this year and as well as being a good place to race it’s also really good for the time off between Grands Prix. The weather makes training easy and there are several good golf courses where I can keep working on lowering my handicap so it’s somewhere I really like going to

“On track the first sector is pretty quick. If you’re anywhere near turn one you can see just how quick F1 cars change direction as we head into turn one, and from there it’s almost flat out through turns two and three. After that it’s a bit stop/start until the long straight down to T8 where there you have the first clear chance to overtake. From there it’s another flat out blast down to T11 and then it almost turns into a street circuit for the final sector. I’m sure for the people watching from the hotel it must look pretty hardcore, but from inside the car it’s not too much of a challenge. You need good traction and the braking stability has to be perfect, but once we’re through that final sector it’s back onto the start / finish straight and the start of another lap.”

Vitaly Petrov,: “I really like Abu Dhabi. There’s always strong support from Russian fans around the track and the circuit itself is a good technical challenge where one of the most important areas we’ll be working on is braking stability. You can make up a lot of time if you can really attack the braking zones, particularly into turns eight and eleven after the two longest straights, so we’ll be working hard on that in the practice sessions.

“One of the other challenges in Abu Dhabi is dealing with the track evolution. At the start of FP1 it is always pretty green but the grip comes in quickly. FP1 and FP3 are both run when the track is nearing its hottest temperatures, but FP2, quali and the race are all run in the later afternoon and into the evening when track temperatures have dropped but the grip levels are continuing to rise, so we’ll be taking a close look at how best to manage the tyre degradation as the conditions change. As we’ve seen all season, looking after the tyres properly can make a real difference to performance, so that’s something everyone will be working on.”

NICO HULKENBERG LOOKS BACK ON A SUCCESSFUL RACE IN INDIA AND AHEAD TO ABU DHABI.

Nico, how special was it to pick up points at the team’s home race?

It felt really good and I think eighth place was as much as we could really hope for from that race, especially when you remember that I was twelfth on the grid. At the end of the race when I stopped in front of the grandstand I could see the fans going crazy and cheering for me. That was a special moment.

Because I made such a good start I was up there in contention for points and able to run in clean air once I got ahead of Perez. The first half of the race was a bit quiet for me because I was running on my own, but the final few laps were tough because Grosjean was pushing me hard. So overall a strong car performance, a great team effort and I think we should be happy with what we achieved.

What are your thoughts ahead of Abu Dhabi this weekend?

I think Abu Dhabi should suit us a bit more than India. It’s a twisty circuit with more low-speed corners and it’s a bit more like Singapore, where we looked quite competitive. So I’m optimistic going there.

PAUL DI RESTA GETS READY TO RACE IN ABU DHABI.

Paul, it was quite a frustrating race for you in India. Do you feel the team can bounce back this weekend?

That’s certainly the plan and the whole team has been working hard to try and understand the issues we had in India. We’ve seen some things in the data so hopefully we can get on top of them and back up to speed right from the start of practice on Friday.

Can you talk us through the Yas Marina circuit and the main challenges of the lap?

It’s a very technical circuit with a lot of tight, low-speed corners and you need to be very precise with the car. There’s very little high-speed stuff, apart from the esses after turn one, but they are taken pretty much flat anyway. There are definitely some similarities with Singapore in terms of the number of low-speed corners.

What are your targets for the remaining few races?

Abu Dhabi is a crucial weekend for us. The car was quite strong there last year so there’s every reason to believe that will carry over into this year. Also, it’s the sort of track that has suited us this year so hopefully we can maximise things and get both cars in the points. If we want to get close to Sauber that’s what we need to do. We need to make sure we have a strong run through until the end of the year.