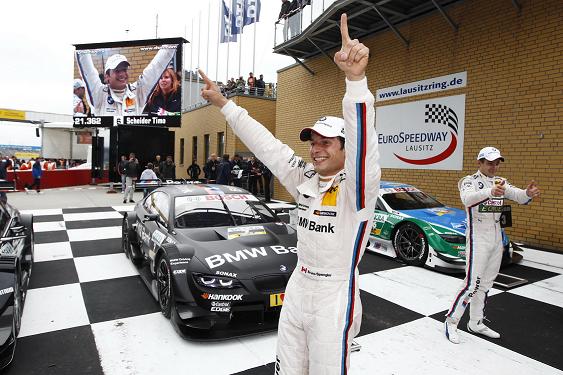 THE 2013 RACE CALENDAR: NORISRING RESCHEDULED – FANS CAN ATTEND BOTH DTM AND FORMULA 1

New dates for the 2013 DTM calendar: as response to the changes on the 2013 Formula 1 calendar, the most popular international touring-car series also has adapted its calendar for the coming season. To make sure that the German car racing enthusiasts aren’t forced to make a choice between the German Grand Prix and the DTM highlight at the Norisring, due to the new date for the Formula 1 event, the tradition-rich race at Nuremberg’s street circuit has been rescheduled and will be held a week later than originally planned – on 14th July.

This change results in another three alterations: due to logistic reasons, the race at Zandvoort’s dune circuit will now be held on 29th September – as penultimate round of the season – between the race at Oschersleben (15th September) and the traditional season finale at Hockenheim (20th October).

On the way to trying to defend his title, BMW driver Bruno Spengler will have to contest 10 races, next year. This means that the 2013 race calendar of the most popular international touring-car series comprises the same number of races as this year’s. One of the highlights of the new season definitely will be the maiden DTM race in Russia that will be held on 4th August at the Moscow Raceway, just a stone’s throw from the Russian metropolis.

“Due to the short-notice alterations on the Formula 1 calendar, we also had to respond by adapting the DTM calendar to the new situation,” says Hans Werner Aufrecht, Chairman of DTM rights holder and promoter ITR e.V. “By postponing the Norisring round by a week we avoid a scheduling conflict with the home race of Formula 1 World Champion Sebastian Vettel. Consequently, the fans aren’t forced to choose if they prefer attending the F1 race or the DTM round in Nuremberg. Thanks to this move, they have the chance of witnessing these two motor-racing highlights on two successive weekends.”

Altogether, six of the ten races will be held on German soil, next year, with the other four taking the DTM fraternity abroad. In addition to the two rounds at the Moscow Raceway and Zandvoort, the three premium-car manufacturers involved – Audi, BMW and Mercedes-Benz – will have to contest another two races on foreign soil: on 19th May at Brands Hatch/GB and two weeks later, on 2nd June, at Austria’s Red Bull Ring, located not far from Spielberg. Meanwhile, the ’German season’ comprises the season kick-off (5th May) and season finale (20th October) at Hockenheim and the aforementioned races in Nuremberg and at Oschersleben as well as the rounds at the Lausitzring (16th July) and the Nürburgring (18th August).