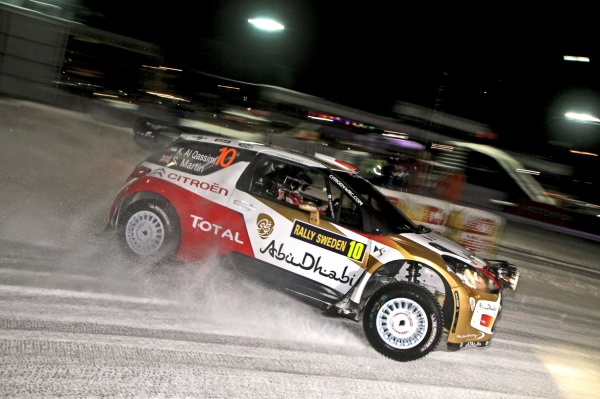 Abu Dhabi, UAE, 8 February, 2013: The UAE’s Sheikh Khalid Al Qassimi fought back strongly from an early setback on his return to World Rally Championship action today in conditions which  created havoc for some of the world’s top drivers  in Rally Sweden.

Partnered by British co-driver Scott Martin in his Abu Dhabi Citroën Total World Rally Team DS3 WRC, Al Qassimi quickly shrugged off the loss of seven minutes when he was sucked into a snow bank on the day’s first of seven treacherous special stages.

“It was a very bad start and just what I didn’t want, but conditions are very difficult and causing problems for a lot of drivers,” he said. “I’ve just put that behind me now and will look to make up as much ground as I can.”

On an opening special stage looking more like an Olympic Games bobsleigh track, Al Qassimi was among a succession of drivers who fell victim to the conditions as he dropped from his starting position of 19th to 39th.

But he produced an immediate response, climbing four places up the field on the next stage and two more on the fourth special stage before reaching the Hagfors Service Park.

Underlining the difficulty of the extreme winter conditions in Sweden, with snow falling and roads turned to ice, British driver Matthew Wilson lost a similar amount of time to Al Qassimi on the opening stage when he slid off into the same snow bank.

Shortly afterwards, two time Rally Sweden winner Mikko Hirvonen, the Finn who is one of the world’s top winter rally specialists, dramatically lost 22 minutes in almost identical fashion, plummeting to the back of the field in his Citroën Total Abu Dhabi WRT DS3 WRC

Holding an early second position in another Citroën Total Abu Dhabi DS3 WRC behind Sebastien Ogier, nine-time world rally champion Sébastien Loeb completed the stage to say:  “The narrow parts were very tricky. It was difficult to find a rhythm, and easy to go in the ditch.”

The ice and snow of Rally Sweden, which is the most difficult and punishing of all 13 WRC rounds, is providing the ultimate test for Al Qassimi on his return to the world stage after a 16-month break.

He spent much of last year recovering from knee surgery, and is gradually easing his way back into international rallying following the creation of a new partnership between Abu Dhabi Racing and Citroën Racing.

Just two weeks ago he came close to victory in Qatar at the start of the 2013 FIA Middle East Rally Championship, and has had only a few days in Sweden to adjust to conditions which provide a dramatic contrast to the desert stages outside Doha.

After two days with Mark Webber at the wheel of the Infiniti Red Bull Racing RB9, today it was Sebastian Vettel’s turn to get acquainted with the new car. The triple world champion wasted no time in exploring its potential and set the day’s third-quickest time, with a lap of 1:19.052. After 102 laps Sebastian said it had been good to get behind the wheel again after the winter break.
“So far, I think we can be pretty happy,” he said. “Mark had a good couple of days to start with and I took over today. It was great to get back in the car, to get rid of the rust and to get back in the groove again. The first feeling is good and the car is working well. It’s difficult to judge the speed, but in terms of reliability it looks pretty good. For today we accomplished what we set out to achieve – which was to put a lot of laps on the car.
“At this stage it’s very difficult to judge anything else,” he added. “It could be that there is a favourite after these three tests, but it could turn out to be completely different in Australia because it’s a different track with different characteristics. I expect the Championship to be at least as tight as last year, as the regulations haven’t changed so much.
“In terms of the times, it’s always nice to be on top, but if there’s one phase of the year where it matters least, it’s here. Now is the time to do our homework. It’s good for us to do a lot of laps, to see that the car is working well and we’ll go from there.”
Race Engineering Co-ordinator Andy Damerum commented: “Obviously today was Sebastian’s first chance to drive the RB9 and, as with Mark, the car behaved well. We were a little delayed getting out this morning because of a few changes we wanted to make, but it didn’t hamper progress and another 102 laps is very respectable. Today was about carrying on the work of the past two days, evolving the car and how it’s performing. We worked on set-up in the morning, did some aero work in the afternoon and also put in some longer runs to check durability and to continue assessing the tyres. Tomorrow, it’ll hopefully be more of the same.”
F1Weekly podcast # 815