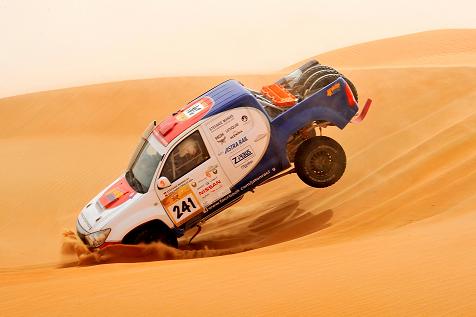 Abu Dhabi, UAE, 7 April, 2013: Argentinean Lucio Alvarez set the early pace in the Abu Dhabi Desert Challenge today after a powerful sandstorm bringing strong winds and dramatically reducing visibility meant that only the cars were able to tackle a shortened first leg, while the 51 bike and quad riders were forced to sit out the action.

Driving a Toyota Hilux Overdrive X T1 in partnership with Bernardo Graue, Alvarez held a lead of 3mins 19seconds at the end of Abu Dhabi Motorsport Management Special Stage 1 which had been reduced from 299km to 183km.

He was followed by Spanish driver Nani Roma in  a Mini, with Dutchman  Erik Van Loon a further 3mins 38 seconds further away in third position in a his HRX Ford X T1.

With Brazillian Guilherme Spinelli setting the fourth fastest time on the stage, UAE drivers Mohammed Al Mansouri in a Nissan Pathfinder and Mansour Al Helei in a Nissan Patrol completed the top six.

It was not a good day, however, for defending champion and six-times winner Jean-Louis Schlesser who had problems with his buggy’s air compressor and finished the stage in 11th position.

While his son Mansour was well satisfied with his day’s work, the UAE’s Yahya Alhelei, was not so happy after finishing the stage in 15th place, although still well in the hunt for another Desert Challenge T2 production class title.

“I have a new co-driver and this is a new partnership, and I started driving very nervously,” said Al Helei “Visibility was bad. You couldn’t see the ground clearly and a lot of cars were getting stuck. We also got stuck once but we drove hard over the last part.”

For much of the day, the weather had threatened to force a complete cancellation of the first leg, as the UAE’s Western Region of Al Garbia, which is the setting for the spectacular cross country rally, felt the full force of the storms lashing the Emirates.

Conditions made it impossible all morning for the Abu Dhabi Aviation Search and Rescue helicopters to take off and provide permanent cover as part of a sophisticated safety operation for the protection of competitors, officials and the small army of volunteers who help to run the event.

And with gusting winds and sand clouds dramatically reducing visibility, making conditions particularly dangerous for the riders, the Automobile and Touring Club of the UAE, the rally organisers, were forced to cancel the stage for the bikes class. Just over an hour later, the 49 cars started the shortened Abu Dhabi Motorsport Management Stage.

“The safety of competitors, spectators, and organisers is always our top priority in the Desert Challenge, and the weather conditions forced our hand,” said ATCUAE President Dr. Mohammed Ben Sulayem, founder of the event.

“The aerial support that Abu Dhabi Aviation provides can be the difference between life and death if someone is injured in the desert and needs evacuation to our rally medical centre, or a hospital.

“There is always a possibility of competitors finding difficulty in an event like this, especially in bad weather, but the search and rescue operation allows us to provide a rapid response to urgent situations and keep casualties to a minimum.

“It wasn’t possible to get the helicopters into the air all morning, and at the same time, visibility was very bad, making it dangerous to run the stage, so we had no hesitation in cancelling the bikes class.” With forecasts for an overnight improvement in the weather, the 250km ADNOC Special Stage 2 is scheduled to start at 8am tomorrow.

The Desert Challenge, which is taking place under the patronage of H.H.Sheikh Hamdan bin Zayed Al Nahyan, the Ruler’s Representative in the Western Region, is the second round of the FIA World Cup for Cross Country Rallies for cars, and the opening round of this year’s FIM Cross-Country Rallies World Championship. The event’s high-profile line-up of strategic partners and supporters includes the Diwan of the Ruler’s Representative for the Western Region, Abu Dhabi Motorsport Management, Nissan, ADNOC, Abu Dhabi Aviation and Qasr Al Sarab Resort by Anantara.