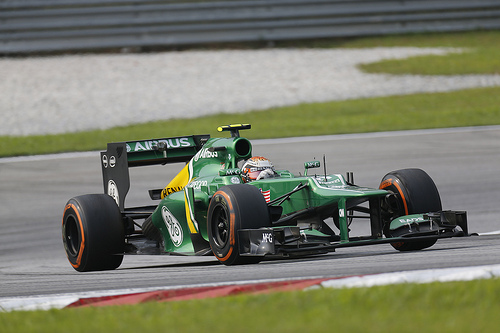 Charles Pic: “Next we have two more back to back races, in Shanghai, China, and then straight to Bahrain. They’re both modern circuits but they put different demands on the cars, especially under braking as China’s pretty easy on brakes but Bahrain is very tough. Last year was my first race in China and I thought the track was pretty good. The lap starts with a very long straight with a tight right hander at the end which is a natural place to overtake right at the start of the lap. One area we will focus on in the practice sessions is making sure the car’s very stable under braking so I can attack into each braking zone – you need that and very good traction out of the slower corners to push the cars ahead around the whole lap.

“On Friday and Saturday morning we’ll also be working on several performance areas that the team has been looking at since Malaysia, particularly around dialling out the understeer issues I had in Australia and Malaysia. We have a few setup options to try to help with that, and some ideas we’re going to look at with Pirelli so I’m sure we can make good progress on that.”

Giedo van der Garde: “China’s the next race and we’re going back to where I did my first FP1 with Caterham last year, so it’s the first track this season I’ve already driven on in an F1 car. Hopefully it’ll be better weather this year as FP1 last year started out wet and was a bit damp for the whole session so I wasn’t really able to push. It would be good if it was sunny as that would mean we can get the most number of laps done and one thing we are going to be focusing on in China is work on improving our setup options for qualifying, using the practice sessions to give us as many options as possible for the race but also for quali. I didn’t have the car behaving exactly as I’d like in either Australia or Malaysia so I want to get that right in China.

“The Shanghai track itself is a very technical circuit. It’s a mix of slow, medium and high speed corners so finding the right balance to deal with the whole lap is going to be key to performance in both quali and in the race. We had oversteer issues on entry into the corners in Malaysia and Australia and that definitely hit my race pace, particularly as it was impacting on tyre degradation levels, so we’ve done a bit of work on that with Pirelli in Milan and back at Leafield since Malaysia so we’ll see what we’ve achieved when we get to Shanghai.”