At the 5.891 kilometres long Silverstone Grand Prix circuit, Harry Tincknell (Carlin) scored his maiden win in the FIA Formula 3 European Championship and also secured the first win for Volkswagen in this year’s series. In a close battle, the Brit beat his compatriot Alex Lynn (Prema Powerteam). Swede Felix Rosenqvist (kfzteile24 Mücke Motorsport) finished third. In the drivers’ standings, Raffaele Marciello (Prema Powerteam) remains in the lead in spite of his sixth-place finish in the first race at Silverstone. He now has a margin of 14.5 points over his closest rival Harry Tincknell.

Harry Tincknell already laid the foundation for his maiden victory in the FIA Formula 3 European Championship at the start, when he converted his pole position into the race lead. During the race, he was not able to pull a gap over his rival Alex Lynn. However, the 21-year-old race leader made no mistakes and did not give Lynn a chance for a successful attack. Behind Tincknell and Lynn, Felix Rosenqvist initially was involved in a battle for third with Nicholas Latifi (Carlin), but then clearly had the upper hand.

For the better part of the race, William Buller (ThreeBond with T-Sport) battled with Lucas Auer (Prema Powerteam) and Raffaele Marciello for fifth place. In a thrilling encounter with various position changes, Auer eventually came out on top. In the closing stages, the Austrian managed to close the gap to Latifi and overtake the Canadian. He took the chequered flag in fourth place. His team-mate Marciello finished sixth behind Latifi, Buller had to make do with seventh. Félix Serrallés (Fortec Motorsports), Luis Felipe Derani (Fortec Motorsports) and Tom Blomqvist (Eurointernational) ended up eighth to tenth. In total, four British drivers made it into the top ten in the first FIA Formula 3 European Championship race on British soil.

Harry Tincknell (Carlin)
“I am really happy with this victory here at Silverstone. We already had a good performance in the season opener at Monza, but things are even going better in our home round. The race wasn’t easy, because Alex kept me under pressure behind me. But my car was great and I didn’t make any mistakes. That was particularly important in the opening laps, because the track was still damp and slippery at that time.”

Alex Lynn (Prema Powerteam)
“In fact, I am slightly disappointed, because I could have done better. Unfortunately, my starting grid position was at the more damp part of the grid, therefore Felix was able to overtake me. Later on, Harry didn’t make any mistakes and thus didn’t give me an opportunity to overtake him. Of course, being British, Harry and I have already done many races here at Silverstone and therefore, perhaps we have a slight advantage.”

Felix Rosenqvist (kfzteile24 Mücke Motorsport)
“At the start, I was able to overtake Alex, but then I made a slight mistake and he overtook me again. However, I also have to admit that Harry and Alex were quicker and I wasn’t able to keep up with them. Now, we have to try and make the car a little bit quicker for the next two races.” 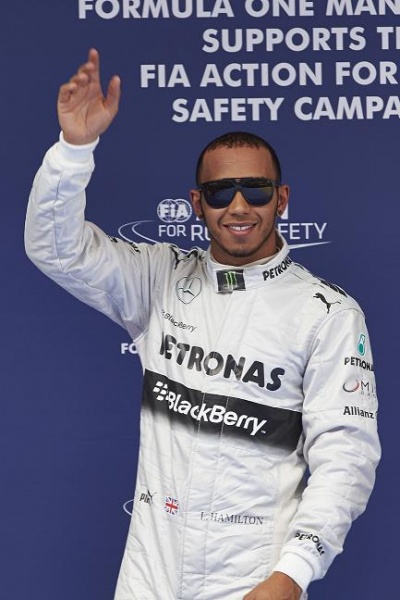 Lewis Hamilton secured his first pole position for MERCEDES AMG PETRONAS at the Shanghai International Circuit today. Team-mate Nico Rosberg qualified in fourth place and will start from the second row of the grid.

– Nico qualified in fourth place, despite losing time in P3 this morning with a hydraulics problem

Lewis Hamilton
Pole position is a great result for us today and to achieve it in my third race for the team is such a good feeling. I had to make sure the radio was off after my engineer told me I had pole because I was so excited! None of us expected this level of performance at this stage of the season and it’s a real bonus. The guys have just been working away, pushing really hard, and I’m so pleased for everyone back at the factories and here at the track that I’ve been able to deliver my first pole in a Silver Arrow. It would be great to convert the position in the race tomorrow but it’s going to be a challenge and we’re realistic about how tough the race will be. The soft tyres don’t last for very long, and with a couple of quick guys starting on the mediums, it’ll be interesting to see how the race plays out. I’m looking forward to it and will give it my all.

Nico Rosberg
A very good team result today and P4 is a decent grid position for me. I wasn’t able to do my qualifying simulation this morning due to the hydraulic problem which was a bit unfortunate. So I needed to catch up through the qualifying sessions and find my way. I took some settings from Lewis for the initial set-up which worked out well. I made a small mistake at the last corner on my lap in Q3 which cost maybe a tenth and a couple of places. But I’m in a good position for the race and we’ve worked a lot on the race performance this weekend so I hope we can gain some places tomorrow. It’s going to be an interesting race with some of the guys starting on the medium tyres so let’s see what happens.

Ross Brawn
A great qualifying session for us today and all credit to Lewis, Nico and the team for a strong performance. It’s a nice reward for all the hard work both here at the track and back at our factories in Brackley and Brixworth over the winter and in the last few weeks as we continue to develop the car. However there are no points gained on a Saturday as they say and there is a tough job ahead of us tomorrow to convert our qualifying positions. It’s going to be a fascinating race from a strategy and tyre perspective so we will wait and see how it plays out. Congratulations to Lewis today on his first pole position in a Silver Arrow, and to Nico for achieving fourth place and the second row despite losing his qualifying simulation this morning.

Toto Wolff
Congratulations to Lewis and Nico. We’re really happy about our pole position today at the Chinese Grand Prix, which the team achieved for the second year in a row. Lewis’s performance was excellent and Nico also did a great job to qualify in fourth place following a hydraulic problem which prevented him from completing his qualifying run in practice this morning. Today’s results are a nice reward for everybody at the team who have worked so hard during the winter to develop the F1 W04 into a competitive car. However we will not get ahead of ourselves with this result as we expect an interesting race which will be decided by the different tyre strategies. A few competitors have chosen to qualify on prime tyres to run a longer first stint instead of the options which we and most of the runners used in Q3.