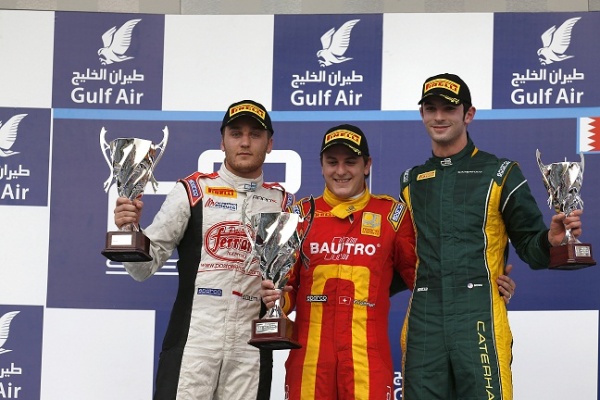 Leimer controls Sakhir action-packed Feature Race
Racing Engineering ace takes a second win in the 2013 GP2 Series season at BIC
Fabio Leimer continues to impress at the Bahrain International Circuit: in today’s feature race, the Swiss ace took the win from pole position thanks to a strong drive and a good strategy. Series rival Stefano Coletti finished second ahead of rookie Alexander Rossi.
Drama happened on the formation lap when Marcus Ericsson stalled on the pre-grid from P2. This meant that Coletti, in P4, had a clear track ahead of him. When the lights went out, the Monegasque driver took advantage of the situation to pass Felipe Nasr who was then second. Coletti immediately put pressure on Leimer, but the Swiss fended off Coletti’s attacks and remained ahead of the chasing pack. Further down the field, Sam Bird made a blazing start from P9 to challenge Nasr for third place into Turn 1. Behind the fighting pair, Rossi and Jolyon Palmer (from P12 on the grid) battled for fifth place.
At the front, Leimer managed to pull a comfortable gap to keep Coletti under control. Both men having started on soft tyres had to try and make them last as long as possible. On lap 7, Rossi was the first man at the front to pit for hard tyres. He rejoined in nineteenth. Palmer did the same a lap later and came out behind the American. Bird and Nasr chose to stop on lap 9, and lost a position to Rossi and Palmer as they fed back onto the circuit.
A lap later, Leimer and Coletti pitted together for hard tyres and rejoined just ahead of Rossi. The three men proceeded to slice their way up through the field. They reached a three-way battle for fourth place between Kevin Giovesi, Rene Binder and Mitch Evans. As the trio were busy fighting, Leimer, Coletti and Rossi found a way past them. Race leader Adrian Quaife-Hobbs (who had opted to start on hard tyres and thus stayed out longer) pitted for some fresh rubber on lap 20. This allowed Leimer back into the lead, the Swiss driver continuing to control his pace and the tyre degradation, with Coletti and Rossi in tow.
The fight between Nasr and Bird began to heat up again in the closing stages, the Brazilian eventually passing the British driver who was later overtaken by Palmer as well. At the chequered flag, Leimer crossed the finish line 1.9s ahead of Coletti and punched the air in delight recording a second feature race win this season. In third, Rossi enjoyed a first podium finish on his GP2 debut. The Carlin duo took fourth and fifth, Nasr ahead of Palmer. Bird finished sixth ahead of Quaife-Hobbs who fought in the final laps to take seventh from Dillmann (who will start from reverse pole tomorrow). Simon Trummer and Johnny Cecotto pocketed the final points.
Sakhir – Feature race
Not Classified
Fastest Lap : Julian Leal (Racing Engineering) – 1:43.889 on lap 24 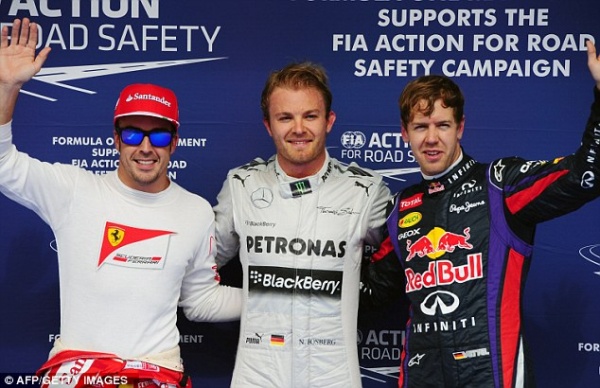 MERCEDES ON POLE FOR THE BAHRAIN GRAND PRIX.

It is only the second pole of Rosberg’s career but the second in a row for Mercedes. He timed 1:32.330 to finish 0.254 in front of Vettel — the three-time defending Formula One champion — and 0.337 ahead of Alonso, who won last week’s Chinese Grand Prix.

Rosberg screamed into the radio: “Yes! Come on guys, that’s how it’s done.”

Rosberg’s teammate, Lewis Hamilton, was fourth but will start ninth because of a five-grid penalty for a gear box change. Mark Webber of Red Bull, who was fifth but was given a three-grid penalty last week in China, will start seventh.