Formula One world champion Sebastian Vettel won the Bahrain Grand Prix for the second year in a row for Red Bull on Sunday to extend his overall lead to 10 points after four races.

The 25-year-old German beat Lotus’s Kimi Raikkonen by 9.1 seconds to chalk up his second win of the season and 28th of his career.

In a race without major incident, and untroubled by anti-government protests and civil unrest elsewhere in the tiny Gulf kingdom, France’s Romain Grosjean finished third for Lotus to complete the same top three as last year.

Vettel now has 77 points to 67 for Raikkonen, who chalked up his 21st successive scoring finish.

SEBASTIAN VETTEL:
“It was good fun at the beginning with some very tight wheel to wheel racing. At the start you don’t know if you will be quick or not, as everyone is a bit all over the place, including yourself! It’s important to get to the front; we saw at the last race that if you get stuck behind someone then it does have an impact on tyre wear and today it was important to make use of the tyres we had saved from qualifying yesterday. I love to be in clean air, so I was pushing hard to get into the lead and, with the speed we had mid-race, it was quite comfortable today. Well done to the whole team, to everyone here, to the factory in the background and especially to those who were working on the strategy today; it worked just as we expected, so we obviously got the numbers right.” 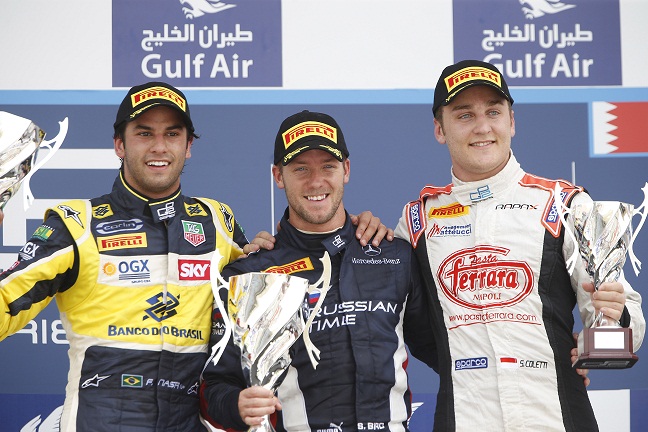 Bird bags Sakhir Sprint Race…
RUSSIAN TIME driver scores first GP2 win for Russian squad in nail-biting finale
It’s happy time for RUSSIAN TIME at Bahrain International Circuit: Sam Bird took a lights-to-flag maiden win for the newcomers holding off a charging Felipe Nasr. The Brit crossed the finish line 0.08s ahead of the Brazilian. In third, Stefano Coletti pockets a fourth podium in four races and maintains the lead in the drivers’ standings.
Tom Dillmann started from reverse pole today. When the lights went off, the Frenchman was busy holding off Adrian Quaife-Hobbs whilst Stefano Coletti charged from P7 on the grid around the outside of Turn 1 to move up to P3. Bird recovered from a slow start from third on the grid, finding a way past Quaife-Hobbs and Coletti on the inside. He immediately put pressure on his teammate for the lead. Further down the pack, contact between Nasr and Alexander Rossi sent the American back to the pits to fix a damaged car. There was more drama with another collision involving Marcus Ericsson and Rio Haryanto.
At the front, Bird overtook Dillmann in the final corner of lap 1. The Frenchman immediately tried to fight back for his position at Turn 1, the two cars running side by side in the following corner. Bird fended off his teammate’s attacks well whilst Dillmann lost a position to Coletti. Nasr was next up and quickly discarded Dillmann too. Bird started to try and build a gap to Coletti that would extend up to 3.8s.
Behind the top three, Quaife-Hobbs, Fabio Leimer and Jolyon Palmer were fighting tooth and nail for fifth place, James Calado and Daniel Abt not too far from the fight. Palmer made a move on Leimer who, trying to defend his position went wide and dropped to eighth, behind Calado. Quaife-Hobbs was then under huge pressure from Palmer, with Calado in tow. The three British drivers battled fearlessly with Calado finding a way past Palmer and Quaife-Hobbs, the MP Motorsport driver also dropping behind the Carlin man. Abt added to Qauife-Hobbs’ misery passing him for seventh place.
In the final laps, Coletti and Nasr picked up the pace, reducing Bird’s advantage to nothing. Struggling on tyres, Coletti braked too hard and ran wide in the final corner of the penultimate lap allowing Nasr to get past and to hunt down Bird for the win. The final lap of the race saw an epic battle between the two drivers, Nasr all over Bird and at the chequered flag, Bird crossed the finish line a hairsbreadth ahead of the Carlin man. Coletti brought home another podium finish ahead of Dillmann, Calado, Palmer, Abt and Quaife-Hobbs.
As Leimer scored no points today, Coletti keeps the lead in the drivers’ championship with 64 points, ten points ahead of the Swiss. Nasr is in third with 48 points. Bird moves up to fifth with 33 points. Calado is now sixth with 24 points, 2 points ahead of Palmer.
Sakhir – Sprint race
Not Classified
Fastest Lap : Nathanaël Berthon (Trident Racing) – 1:45.301 on lap 17
F1Weekly podcast # 815