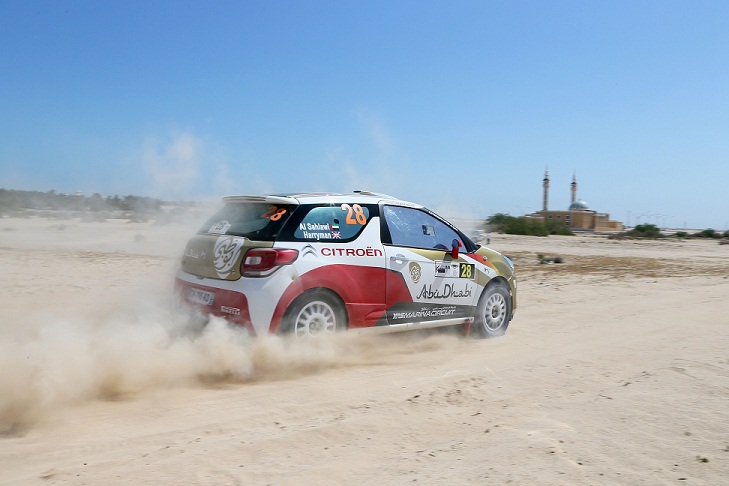 Driving a pair of identical Citroen DS3 R3 2WDs, Al Sahlawi and Al Mutawaa make their Jordan Rally debuts from 11-13 May and the pair are aware they must treat the event with extra caution as they aim to continue their rallying education over some of the region’s most demanding special stages.

“It’s going to be a tough rally because it’s on the side of a mountain with tight roads,” said Sahlawi, who is partnered by Irish co-driver Allan Harryman. “It’s completely different terrain to Qatar and Kuwait; a totally new experience for us. I know from talking to Allan and other drivers that a single mistake can put you out of contention. My target is to avoid any mistakes, finish the rally and learn as much as I can.

“At the moment I’m working on simplifying my pace notes. They were too detailed and getting me confused. I need to simplify them so that I can react better when I hear them.”

Abu Dhabi Racing team-mate Al Mutawaa, who is accompanied by another experienced co-driver in Stephen McAuley, said: “Everyone tells me that this is going to be a much more difficult rally than Qatar and Kuwait because you only have a small margin for error.

“If you make a mistake in the other desert rallies you can go wide and still be OK. In Jordan there’s not much of a run-off area, so if you make a mistake you could hit a wall or go off the side of the mountain. This will be my first time in a rally like this so it’s better to take it easy to begin with.”

After the first two rounds, Al Sahlawi leads from Al Mutawaa in both the two-wheel drive and young driver categories which are new to the Middle East Rally Championship this season.

In preparation for another big physical test in Jordan, both have been putting in a lot of extra hours in the gym.

“Towards the end of the Kuwait rally, I was starting to lose concentration because I was getting tired, so I’ve been working on improving my fitness,” said Al Sahlawi. “Mohammed and I also started feeling some pain in our lower backs because we spend such a long time sitting down and taking multiple impacts. We’ve been doing work to strengthen our backs and upper bodies so we’re better prepared physically to handle the pressure.

“Most people underestimate how physically demanding rally driving can be. If you don’t prepare properly, you can get tired and your brain is less alert. When that happens you don’t hear the pace notes being called out so clearly and mistakes can creep in.”

After a ceremonial start in Amman on 9 May, the main action in the Jordan Rally will again be centred around the Jordan Valley, close to the Dead Sea, with the route certain to feature numerous stages used when the country hosted the World Rally Championship in 2008, 2010 and 2011.