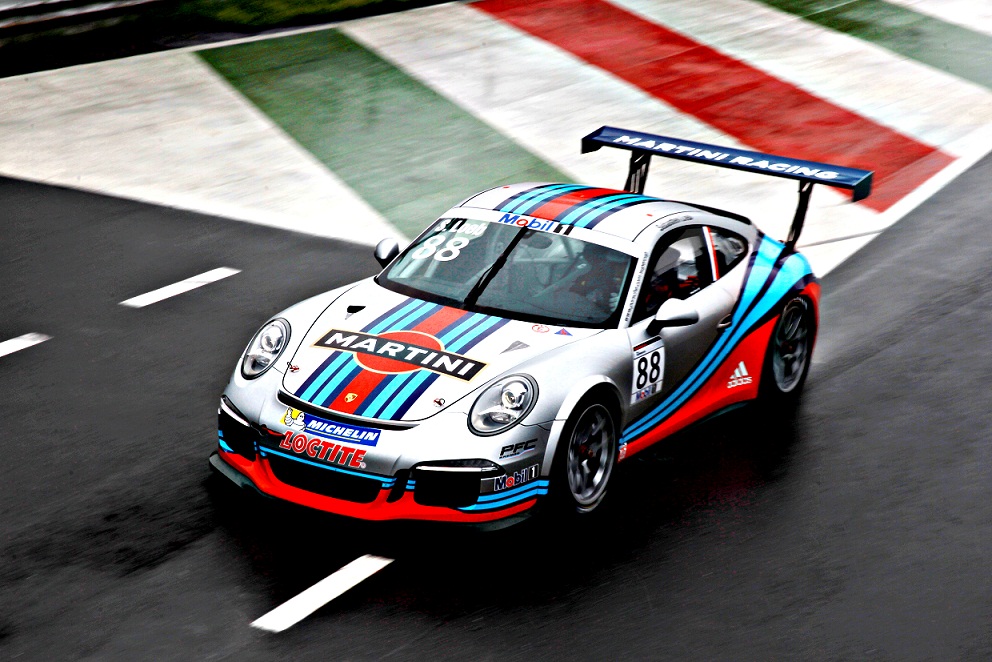 MARTINI® AND PORSCHE RE-IGNITE MOTORSPORT PARTNERSHIP IN SPECIAL ANNIVERSARY YEAR
London, 6 May 2013 – A long-standing partnership involving two motorsport legends will be re-ignited as the new Porsche 911 GT3 Cup car makes its debut wrapped in iconic MARTINI® Racing Stripes. As part of the MARTINI® 150 Anniversary celebration this year, the new car will be driven by nine-time world champion, Sébastien Loeb, during the opening round of the Porsche Mobil 1 Supercup in Catalunya, Barcelona, Sunday 12 May.

As Official Partner to the Porsche Mobil 1 Supercup, which runs as a support series on the Formula 1® bill, MARTINI® – maker of the world’s number one vermouth and favourite branded Italian sparkling wine – resurrects an important part of its rich 150-year heritage. The new car displays the distinctive dark blue, light blue and red stripes of MARTINI® Racing for the first time since 2008.

Most notable for his rally endeavours, Sébastien Loeb is no stranger to the tarmac of circuit racing – often entering multi-discipline championships with the same determination and courage the former electrician is famous for. As part of a three-pronged campaign highlighting the illustrious history of MARTINI® Racing, the 39-year-old Frenchman will compete in two rounds of the high-profile Porsche Mobil 1 Supercup; Catalunya (12 May) and Monte Carlo (26 May).

A second driver, yet to be named, will take the helm of the Porsche 911 GT3 Cup car for the third round at the MARTINI® home circuit – Monza, Italy later in the year on 8 September.

Arnaud Meysselle, MARTINI® Global Category Director of Vermouth and Sparkling Wine, said of the rekindling of the partnership of two iconic brands: “This is an extraordinary year for MARTINI® as we are celebrating our 150 Anniversary. Partnering with Porsche once again, during 50 Years of 911, and seeing the new 911 GT3 Cup car adorned with MARTINI® Racing Stripes is a special moment for the brand and MARTINI® Racing enthusiasts alike. We believe LUCK IS AN ATTITUDE and the resurrection of the celebrated partnership between MARTINI® Racing and Porsche is the start of a new chapter in this legendary story.”

Jonas Krauss, Head of Porsche Mobil 1 Supercup, said: “From the first day the beloved stripes of MARTINI® Racing decorated a Porsche 906 in 1968, the illustrious pairing has gone on to claim some of motorsport’s most coveted titles, including numerous Le Mans 24 hours titles, during what is now considered to be a classic period of motorsport.  We’re excited to be once again partnering with MARTINI® in its 150 Anniversary year.”
F1Weekly Podcast # 825