Vettel beat Fernando Alonso to the P1 in Friday’s second practice for the Spanish GP.

CAR 1, SEBASTIAN VETTEL
First Practice Session: Position: 19, Best Time: 1:29.457, Laps: 11
Second Practice Session: Position: 1, Best Time: 1:22.808, Laps: 34
“We have some new parts here but the days of big, big upgrades don’t really happen now with the regulations how they are. This afternoon was fairly conclusive, but this morning wasn’t really much good with the weather. It’s hard to say much about the harder tyre, I think the number of pit stops will be the same here in this race as at the last few.”
CAR 2, MARK WEBBER
First Practice Session: Position: 20, Best Time: 1:29.473, Laps: 21
Second Practice Session: Position: 3, Best Time: 1:22.891, Laps: 36
“It looks reasonably tight. We couldn’t have got more out of it today really, the weather made things a bit tricky, but it was a pretty good day overall. We had a few things to test this morning which we had to move to the afternoon when the weather was better – but it was okay. We still have work to do tonight. It’s a nice grand prix to come to – one of the most popular of the year.”
AND FINALLY
After the serious business of the day, here are five fast facts from Seb:
Sebastian Vettel’s Top 5… Tracks he’d like to race on:
1.     Watkins Glen – Because I’ve heard lots of good things about it, as in it’s a proper circuit, with lots of ups and down and loads of history. F1 used to go there but not any more, so I’d like to try that.
2.     Le Mans – I’ve been around there in Formula 3 but only a smaller track. I think it would be quite special to go around there in a real Le Mans prototype.
3.     Laguna Seca – I’ve been there, but not in a race car – just a road car. It was still quite impressive though, so that might be a challenge.
4.     The original Spa-Francorchamps – that would have been something. I think that was a proper man’s track, with lots of high-speed corners. I can’t imagine going through the Masta Kink in a modern Formula One car.
5.     The Norsdschleife – It just has to be there. I have done a couple of laps but I don’t remember most of the corners. It’s long and probably too tough for a modern Formula One car, because they’re too low. But even in a road car it’s special. I think you need big balls for the Fuchsröhre, the part where it goes downhill. You just stay flat and accelerate. You’re way above 200km/h and then you have this massive compression at the bottom and then you go uphill again and it’s just…. wow! Imagine doing that in a proper car in a 24-hour race, flat out through there at night. Amazing. 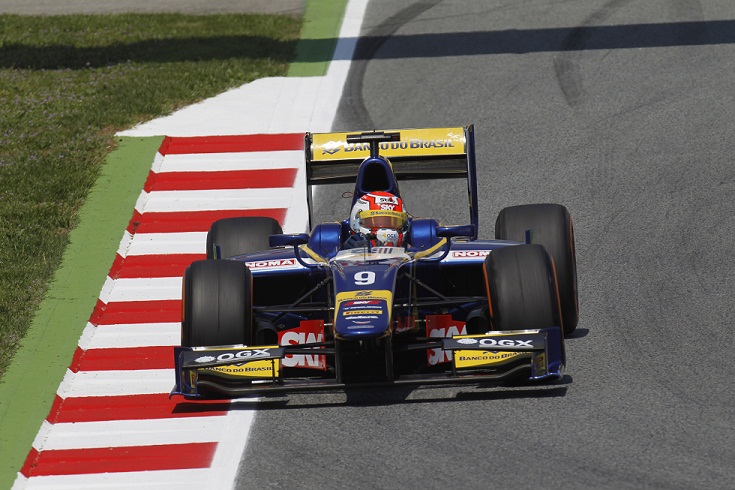 Felipe Nasr leads Barcelona free practice…
Carlin driver sets the pace in Round 3 opening session
Felipe Nasr has set the tone: the Carlin racer is hungry for glory this week at Circuit de Catalunya and he wasted no time in showing his rivals how quick he can be setting up the fastest laptime in this morning’s free practice session in a 1:30.103, seven tenths clear from James Calado who finished second.
The session opened on a drying track with most of the drivers opting to wait before taking to the track. Robin Frijns set the early pace. The rookie’s latpime of 1:31.264 gave the signal for the remainder of the drivers to feed onto the track. Frijns improved on his next attempt to clock in a time of 1:31.010.
Ten minutes into the session, Nasr put his head down and lit sectors 1 and 2 in purple before crossing the start/finish line in 1:30.103, a clear nine tenths from Frijns. His teammate Jolyon Palmer also found the extra pace to move up to P2, but eight tenths slower than the Brazilian and thus enough room for Calado and Johnny Cecotto to split the Carlin pair.
Halfway through the session, the track was yellow flagged when Simon Trummer stopped at Turn 13. Most of the drivers made their way back into the pits. Series leader Stefano Coletti who had yet to make an appearance onto the track decided to benefit from light traffic to make his way into the top ten. At the chequered flag, Nasr retained P1 ahead of Calado, Cecotto, Palmer, Frijns, Coletti, Sam Bird, Tom Dillmann, Marcus Ericsson and Fabio Leimer.
If this morning’s weather forecast brought rain, this afternoon’s should bring sunny conditions also known as the best conditions for a classic GP2 qualifying session at 16.00 local time.
Barcelona – Free Practice
F1Weekly podcast # 815