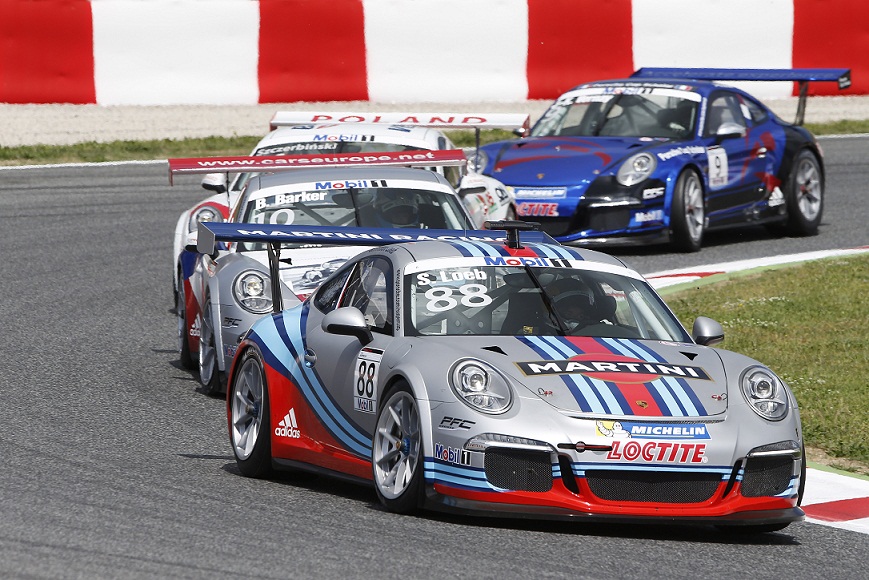 Loeb defies predictions in first Porsche Mobil 1 Supercup race…
London, 14 May 2013 – Sébastien Loeb proved that LUCK IS AN ATTITUDETM this weekend (11/12 May 2013) as he stepped out in the new Porsche 911 GT3 Cup car draped in legendary MARTINI® Racing Stripes. His performance wowed the huge Formula 1® crowds at Circuit de Catalunya, Barcelona, during the opening round of the Porsche Mobil 1 Supercup.

Fresh from his World Rally Championship (WRC) win in Argentina, the nine-time World Rally Champion proved you can do anything with the right attitude as he skilfully guided the demanding MARTINI® Racing striped GT racer around Spain’s stunning 4.6 kilometre race track. Having only driven the car twice before, the rally legend qualified thirteenth from a 27-car grid during Saturday’s 30 minute qualifying session. He then went on to take an eleventh place finish as the chequered flag fell on Sunday’s 14 lap race.

Part of the MARTINI® 150 Anniversary celebration, Sébastien Loeb’s debut in the new livery re-ignites the legendary relationship between MARTINI® Racing and Porsche. A relationship representing some of motorsport’s most glorious victories across almost every category of the sport. As excitement mounted, there was a scrum of photographers on the start grid as smiling Formula 1® driver Adrian Sutil posed with the car and Bernie Ecclestone himself made an appearance to see the iconic sight of eleven light blue, dark blue and red stripes first hand which once symbolised a large part of his Brabham Formula 1® days in the ‘70s.

More at home on the twisty gravel stages of rallying than the slick tarmac of the race track, 39-year-old motorsport maverick, Loeb, has written the opening line of another textbook entry in MARTINI® Racing history with his impressive performance ahead of Monte Carlo, 25/26 May. The Frenchman quickly made up two places from his starting position during the 30-minute race – narrowly missing out on a top-ten finish after an exciting wheel-to-wheel race with Britain’s Ben Barker.

The pair briefly traded places during lap seven following an impressive manoeuvre which saw the MARTINI® Racing stripes of Loeb’s machine charge down the inside of the number 10 car to gain tenth position. However, experienced Supercup driver Barker regained his spot through the next corner and drove a defensive race for the remaining seven laps – contending with a rear-view mirror filled with the celebrated racing livery, which has graced many legendary Porsche models. Barker eventually crossed the line in tenth, just one second ahead of Loeb’s number 88 car in eleventh.

Today’s prediction-defying result is testament to the attitude and desire to win synonymous with drivers who sit behind the wheel of a MARTINI® Racing machine. One of the most successful drivers the world has ever seen, Loeb retired from WRC to step out of his comfort zone and try new things. Racing against a large grid of seasoned Porsche Mobil 1 Supercup drivers is a tough challenge, particularly against youngsters who have grown up as specialists in circuit racing.

Sébastien Loeb said: “During the first laps I was somewhat cautious. I know how easy it is to get tangled up in a skirmish with such a close field. I wasn’t able to get much further ahead. When you have so many strong drivers ahead of you who are all going the same speed there is not much chance to overtake. Still, it was huge fun. As the weekend went on I felt increasingly better in the Porsche 911 GT3 Cup and now I’m looking forward to the race in Monaco. There, the qualifying is more important of course and hopefully I can start from a little further up the grid.”

Florian Kurz, Head of Business Relations Porsche AG, added: “It was fantastic to see a driver of [Sébastien] Loeb’s calibre race the VIP car this weekend. He is well respected in every echelon of motorsport and I know our Porsche Mobil 1 Supercup drivers were looking forward to racing against him.
“The new Porsche 911 GT3 Cup car looks great, especially dressed in fantastic MARTINI® Racing livery as part of MARTINI® 150 Anniversary celebrations, remembering the very special relationship between MARTINI® and Porsche. Both the car and Loeb caused quite a stir.”