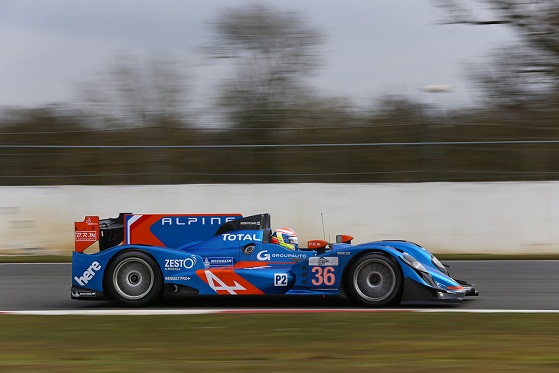 Alpine back on the podium at Imola…

–           Alpine A450 drivers Nelson Panciatici and Pierre Ragues completed the 3 Hours of Imola (round two of the 2013 European Le Mans Series) in second place.

–           Thanks to their first podium finish of the season, Signatech-Alpine and its drivers are currently second in the championship’s provisional standings.

–           Signatech-Alpine’s focus will now switch to its preparations for the 90thanniversary Le Mans 24 Hours on June 22-23. The Alpine A450 will be shared at the French race by Nelson Panciatici, Pierre Ragues and Tristan Gommendy, with Paul-Loup Chatin as the team’s reserve driver.

After being represented by works drivers Jean-Pierre Jabouille (Alpine A440), Jean-Pierre Jarier, Jacques Laffite, Jody Scheckter and Henri Pescarolo (Alpine A442) at Imola in the 1970s, the French make returned to the famous Italian venue this weekend with an Alpine A450 shared by Signatech-Alpine’s Nelson Panciatici and Pierre Ragues.

The first day of free practice saw the team top the order as it prepared for the second round of the 2013 European Le Mans Series. In qualifying, Nelson Panciatici put the Alpine A450 on the second row of the grid.

The Frenchman defended fourth place during his first stint and, on Lap 24, the Alpine A450 was the first car to pit for fuel. Nelson Panciatici handed over to Pierre Ragues, although Signatech-Alpine’s chief rivals all opted for a single driver- and tyre-change.

Pierre Ragues re-joined in fifth place and the car made its second stop shortly after the race’s halfway point. This time, he stayed at the wheel and the team’s offset strategy began to pay dividends, since he re-emerged in third place and started to gain ground on the top two cars.

Despite a few drops of rain at different places round the track, the Normandy-based driver continued to reduce the gap. After the car’s last pit stop and driver-change, Nelson Panciatici kept up the pressure and soon moved up to second place to claim Alpine’s first podium finish since the brand’s triumph at the Le Mans 24 Hours in 1978.

“We were fast throughout the race,” noted Nelson. “Despite the traffic, we managed to stay at the front of the field and I kept up a strong pace all the way to the flag. It’s a great result for the team, but I can’t help feeling we had the potential to win…”

“The race enabled us to learn a great deal about the car on Michelin slicks,” added Pierre. “I am very pleased with our lap times and this result is a big confidence-booster ahead of Le Mans. Next time out, we will need to put in a strong performance for a whole 24 hours!”

“Both our drivers did a splendid job,” observed Signatech-Alpine’s Team Principal Philippe Sinault. “We still need a little time to fully grasp the potential of our Michelin tyres in race trim. We preferred not to take the risk of double-stinting, but our tyres would have allowed us to. We are competitive and we will now be able to optimise our strategy thanks to the data we collected at Imola. There is a great deal of interest in this project and a podium finish in Italy puts us in a very positive frame of mind for the Le Mans 24 Hours.”

Alpine’s junior driver Paul-Loup Chatin won the LM PC class at Imola and has moved to the top of his championship.

Signatech-Alpine will now commence a specific programme in order to prepare for Le Mans. Next week, Nelson Panciatici, Pierre Ragues and Tristan Gommendy will all be at Nevers Magny-Cours, France, to get in some night-time running in the Alpine A450. The team will then have two Alpine A450s for the official pre-Le Mans Test Day on June 9 when it will have a new ‘low downforce’ aerodynamic package.