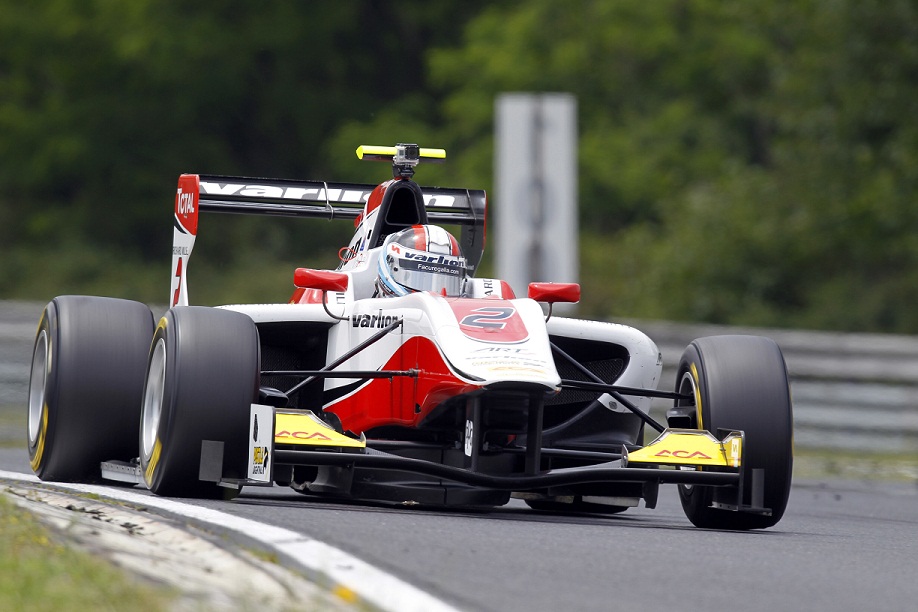 Regalia reigns at Budapest mid-season test…
ART Grand Prix’s Facu Regalia fastest on day two of testing in Hungary
Argentine Facu Regalia recorded the quickest time of the two-day test at the Hungaroring in a session affected by heavy rain and changeable weather. Koiranen GP’s Aaro Vainio headed the timesheets in the afternoon.
Day 2 of the test started with overcast, humid conditions and a damp track as the 27 drivers got down to business early on before the expected rain made an appearance. Trident’s Emanuele Zonzini was first onto the circuit but it was fastest man from day one Kevin Korjus (Koiranen GP), who set the early pace. The Estonian was first to lap in the 1m33’s until fellow rookie Melville McKee (Bamboo Engineering) bettered his time with a lap of 1:33.568.
Light rain fell upon the Hungaroring at the midway point of the session and the indecisive weather made it challenging for the drivers, some of which wanted to focus on qualifying and race simulations in preparation for the upcoming races. The Trident pair of David Fumanelli and Giovanni Venturini rose to P2 and P3 respectively, less than a tenth shy of McKee’s fastest time.
In the final 15 minutes the track began to dry and the pitlane was a hype of activity as new Pirelli tyres went on and the drivers surged onto the circuit. Nick Yelloly (Carlin) and Lewis Williamson (Bamboo Engineering) lit up the timing screens and were first to break into the 1m32s barrier. With five minutes left on the clock, Regalia posted the fastest time of the test to go P1.
The top ten in the morning session finished as Regalia, Williamson, Yelloly, MW Arden’s Daniil Kvyat and Carlos Sainz, Patrick Kujala (Koiranen GP), Tio Ellinas (Marussia Manor Racing), Jack Harvey (ART Grand Prix) and the Jenzer Motorsport duo of Alex Fontana and Patric Niederhauser.
The drivers hurried onto the track for the start of the afternoon session as heavy rain clouds loomed above but there was an early red flag when Adderly Fong (Status Grand Prix) stopped on the circuit. Vainio and Kujala topped the timesheets once the action resumed and the heavens opened. The session was red flagged for 35 minutes due to so much water on the circuit which was causing the drivers to aquaplane.
Regalia had a trip to the gravel bed which caused a short interruption covered by red flags. The sun shone down but it wasn’t enough to dry the track, meaning nobody could challenge Vainio and Kujala at the top of the standings. With 20 minutes remaining, Carlin’s Eric Lichtenstein made contact with the tyre barrier which brought the red flag out and once re-started, Ryan Cullen (Marussia Manor Racing) also touched the guardrail which brought the day and the test to a close.
The top eight times of the afternoon session were set before the downpour of rain, therefore at the chequered flag it ended as Vainio, Kujala, Giovanni Venturini (Trident), Josh Webster (Status Grand Prix), Sainz, Fong, Kvyat, Korjus. Conor Daly (ART Grand Prix) and Zonzini completed the top ten.
There is only a short wait before GP3 is back in action as the Series heads to Valencia for Round 2 next week on the 15th and 16th June.
Day 2: Morning
Day 2: Afternoon