Felix Rosenqvist (kfzteile24 Mücke Motorsport) appears to be unbeatable at the moment: having won all three races at the Red Bull Ring at the beginning of June, he secured his second victory in the RTL GP Masters of Formula 3 this weekend. Two years ago, the Swede had already been the popular winner of Europe’s most prestigious Formula 3 race. At the 4.307 kilometres long circuit in Zandvoort, embedded in the North Sea dunes, he won the 23rd running of the Masters of Formula 3 from Alex Lynn (Prema Powerteam). Emil Bernstorff (Prema Powerteam) claimed third place.

Having started from pole position, Rosenqvist won the dash towards the first corner and drove a safe and undisputed lights-to-flag victory home. Only on lap 16, the Swede had a hairy moment when he suddenly lost 1.6 seconds to his closest rival Alex Lynn. The reason was a medical car that was on the track. After that, Rosenqvist completed his laps in a seasoned manner and gradually extended his lead until taking the chequered flag as the winner at the end of lap 25.

Felix Rosenqvist (kfzteile24 Mücke Motorsport)
“Pole position, victory and the fastest race lap: it was a perfect weekend for me. Prior to the event, I didn’t very much focus on this race, because this year, I am clearly concentrating on the FIA Formula 3 European Championship. I regarded the Masters as an additional race and just wanted to have a good time. Nevertheless, the goal was, of course, to win here and even more so after things went so well in the free practice sessions and in the two qualifying heats. I had the only hairy moment of the race when all of a sudden, a medical car was in front of me at the track. Apart from that, I was in control throughout.”

Alex Lynn (Prema Powerteam)
“Today, Felix was the quicker driver and he has won while I can be happy with second place, too. My start was food and I was able to gain one place, but I didn’t have any possibilities to keep up with Felix’s speed in the race. As I had a little bit of oversteer, my tyres degraded towards the end of the race, allowing Emil Bernstorff to close up to me more and more.”

Harry Tincknell (Carlin)
“At the start, I tried to overtake Felix, but I probably was a little bit too aggressive and therefore I had too much wheelspin. I was racing at Zandvoort for the first time and I reckon that fourth place isn’t a bad result. It is only slightly disappointing as I started the race from second place on the grid. However, it was good practice for the FIA Formula 3 European Championship round here at Zandvoort at the end of September.”

VETTEL HOLDS OFF KIMI TO WIN THE GERMAN GRAND PRIX…

SEBASTIAN VETTEL: It was a tough race; it was one of the toughest for a long time. I’m happy the race wasn’t two or three laps longer, as Kimi was a bit quicker towards the end. I’m very happy that it worked out and it’s very special. The team worked really hard to give me the chance to win this weekend and we got it. First of all you have to remember that it’s a privilege to have the opportunity to race in your home country; we have around 20 races, but there are obviously more than 20 countries, so it’s special to race at home and get so much support. I had a good start and then just focused on every single lap during the race. You don’t really think about where you are while you are racing, you can’t allow your mind to drift, but when the flag came out and the race was over I really let myself enjoy the parade lap and saw a lot of people in the grandstands cheering and waving flags. These pictures will remain in my head for a long, long time.” 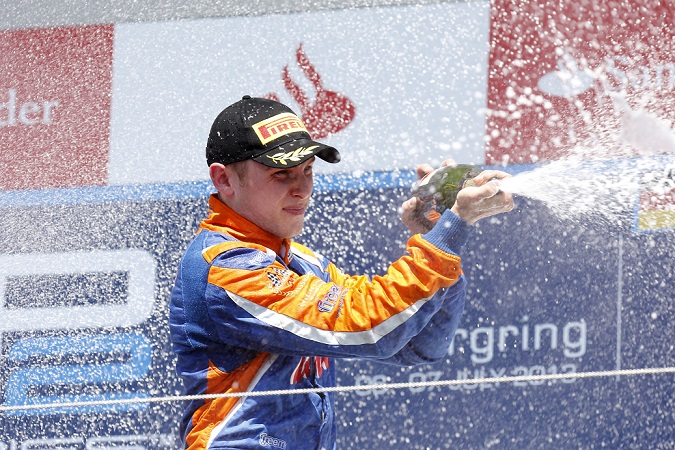 Lancaster powers to sprint win
Briton leads from lights to flag in Germany
Jon Lancaster has claimed his second sprint race victory in a week with a strong, mature race this morning at the Nurburgring, leading all the way from the start to win ahead of countryman James Calado and Fabio Leimer.
The Hilmer driver lined up on the front row next to poleman Tom Dillmann, outdragged the Frenchman when the lights went out, and claimed a lead which would not be challenged into turn one, with Dillmann clearly holding up Calado, Leimer, Marcus Ericsson, Sam Bird, Felipe Nasr and Stefano Coletti.
Calado was all over the back of Dillmann but was unable to find a line through when Daniel De Jong and Stéphane Richelmi came together behind them, with the Monegasque driver stuck in the middle of the circuit to bring out the safety car as the marshals got to work. The race ran live two laps later, with Calado claiming P2 at the hairpin next time through.
Further back Robin Frijns was on a charge: he disposed title leaders Coletti and Nasr with ease to put himself behind Bird: with teammate Dillmann slowing ahead, the Briton was looking to get past Ericsson when Frijns went for a gap which probably wasn’t there and spun to the back from the inevitable collision before retiring with damage shortly afterwards.
As the laps wound down, those with fresher tyres were given a clear advantage: Dillmann dropped like a stone before eventually retiring, while Nasr dispatched Bird and Ericsson with ease, with Cecotto following suit. But at the front it was Lancaster who had the pace left to repel a late race challenge from Calado to win by 1.5 seconds, with Leimer out of tyres but able to hold on for third because his rivals were held up for so long.
Nasr turned around his recent misfortune for a strong race to P4, with Cecotto running through his rivals late in the race for fifth, ahead of Alexander Rossi, Mitch Evans and a clearly struggling Bird. Coletti holds on to the title lead on 135 points, ahead of Nasr on 108, Bird on 90, Leimer on 88, Calado on 84 and Lancaster up to 6th on 65 points. Carlin retake the lead in the teams’ title from Rapax, 147 points to 143, ahead of RUSSIAN TIME on 137, Hilmer Motorsport on 112 and Racing Engineering on 110 points ahead of the next round in Budapest.
Nurburg – Sprint Race
Not Classified
Fastest Lap : Fabrizio Crestani (Venezuela GP Lazarus) – 1:41.626 on lap 14 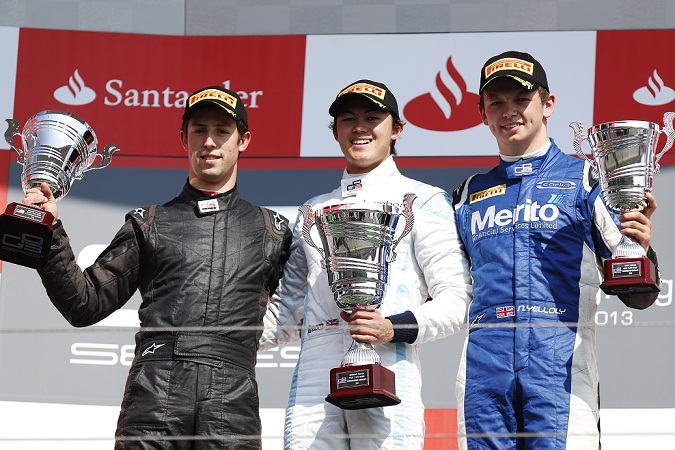 McKee achieves maiden win in Nurburgring Race 2-
Bamboo Engineering and Melville McKee achieve their first win in GP3…
Eight races, eight different victors! Melville McKee made a great start to the race, straight into the lead and held off immense pressure from Status Grand Prix’s Alexander Sims until the chequered flag in a nail-biting conclusion. Brit’ McKee and his team both celebrate their debut win in the category. Nick Yelloly (Carlin) was third.
Reverse pole-sitter Sims, stepping in at Status Grand Prix for a one-off round, lost several places at the start, with McKee sneaking into the lead. Carlos Sainz (MW Arden) made a great start, as did Yelloly, with four abreast going into Turn 1. ART Grand Prix’s Jack Harvey tried a move on the outside of the first turn but contact was made with Sainz, which dropped the Brit’ down to P10.
After a perfect Saturday, Race 1 winner Facu Regalia failed to get away from the pre-grid and had to start from the pitlane instead of his original P8, the Argentine retiring at the midway point.
McKee pulled a one second advantage with Yelloly close in pursuit after passing Sims early on. Lewis Williamson (Bamboo Engineering) also got the better of Sainz moving up into P4, with Tio Ellinas charging hard, moving ahead of his Marussia Manor Racing teammate Dino Zamparelli after the British driver ran wide.
There were close battles throughout the field with the dice for P8 and the final points position. Conor Daly (ART Grand Prix) held the vital points spot with Patric Niederhauser (Jenzer Motorsport) and Harvey trying everything they could to find a way through.
Sims was on a mission at the midway point as he made of ease of passing Yelloly who was struggling with his tyres, as he set his sights on P1. The last few laps the Status Grand Prix driver reeled McKee in and was within half a second of him on the final lap. Niederhauser was desperately trying to make a successful move on Daly and on the final lap, the Swiss driver passed the American to collect the final point on offer.
McKee had his mirrors full with Sims in the final moments, even on the final corner, the Status Grand Prix tried to find a way through but the young rookie had it covered and raced home to collect the chequered flag first topping off a brilliant day for Bamboo Engineering. Sims and Yelloly took joined him on the rostrum with Williamson, Sainz, Ellinas, Zamparelli and Niederhauser completing the top eight.
Ellinas extends his lead in the Drivers’ Standings with none of his main rivals scoring points in Race 2. The Cypriot is on 91, with Regalia on 72. Korjus, Harvey and Daly are on 59, 57 and 52 respectively. ART Grand Prix hold a large advantage in the Teams Standings on 181, ahead of Koiranen GP on 103 and MW Arden on 99.
Round 5 of the Series will take place in three weeks’ time as the paddock travel to Budapest, Hungary 26-28 July.
Nurburgring – Race 2
Not Classified
Fastest Lap : Melville McKee – Bamboo Engineering : 1 :46.938 on lap 2
F1Weekly Podcast # 814