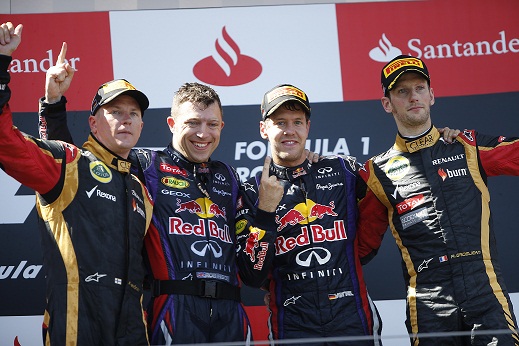 “We wanted to win; we couldn’t, but we did score the most points here.

“We had a pretty good last stint of the race, but the cars are close on performance so it’s difficult to overtake. Maybe some more laps would have helped us, but the race is only 60 laps so you have to do your best with that. After my first stop I was stuck behind a Mercedes for a while, but once I was past the car was pretty good. After the safety car three of us were able to pull away, but we were too close on speed to change the order. It was a good day for the team. Of course, we wanted to win; we couldn’t, but we did score the most points here. The warmer temperatures definitely helped us, so let’s hope for some more hot weather in Budapest.”

“Everything went right today and it was pretty special when I was leading the race.

“After some difficult races, everything went right today and it was pretty special when I was leading the race and returning to the podium is naturally a good thing. My car felt great on the first stint with the soft tyres and it’s clear that the summer weather really suits us. Hopefully we’ll have a long summer now in Europe! Letting Kimi past at the end of the race was the sensible thing to do as we were on different strategies and he had more of a chance of going for the win than I did at that point. We didn’t know which tyre would be the best at the end of the race, so we didn’t put all our eggs in one basket.”

“We need to continue like this to make up for lost ground in both championships.

“That was a very good race from the team which validates all the hard work which has been going on back at Enstone, so we thank everyone at the factory for their efforts. After three difficult weekends, being on the podium was exactly what we needed. We need to continue like this to make up for lost ground in both championships. The E21 worked very well today and both Kimi and Romain drove superbly. We had a good strategy from the pit wall, some fantastic pit stops, and were it not for losing some time behind both Mercedes, it’s possible that we could have won today. I think we’ll have to ask Pirelli to keep this weekend’s specification of tyres for the rest of the season.”

“We’re very happy to be back on the podium again.”

“We’re very happy to be back on the podium again after a short spell of bleak races. Both cars ran faultlessly from start to finish and it did look like we could be able to take the fight to Sebastian [Vettel] but ultimately we didn’t quite manage it. Kimi was held up by Lewis [Hamilton] after his first pit stop but came back fighting at the end of the race. Romain did a fantastic job managing his first set of tyres which enabled him to make some great gains. We did consider running Kimi on a two-stop strategy but we could see the tyre performance dropping. We expected slightly more performance from his final set of soft tyres, but he was right with Seb at the end.”

“A great race from both drivers, with incredible pace. It was a shame that the traffic pushed us back from the outright win but a double podium is still a great result, and more than we expected going into the weekend. Engine-wise, it’s been a good Grand Prix, although temperatures were hotter than expected. The result shows the engine-chassis package is back to its best and we’ll look to keep this going to the next race.”