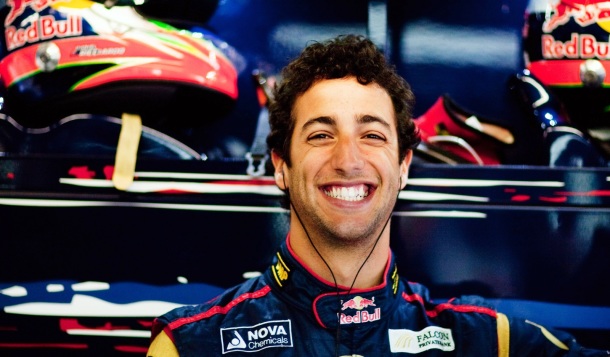 Clark and Nasir go over the results of the German Grand Prix and discuss the latest current events! and here is some news on the young driver tests at Silverstone…..
SILVERSTONE YOUNG DRIVER TEST – DAY TWO – DANIEL RICCIARDO ON TOP…
Day Two of the Young Drivers’ Test saw Infiniti Red Bull Racing split its workload in two, with António Félix da Costa at the wheel of the RB9 in the morning and Daniel Ricciardo taking over in the afternoon for testing of Pirelli’s new specification tyres.
António picked up where he left off yesterday and though he managed just 19 laps, the Portuguese driver was pleased with his day and half’s work with the team.
“To drive the car for half of the three days of testing has been a fantastic opportunity,” he said. “It’s a good sign that the team believes I can carry such a heavy workload and get the job done. To be working with a world championship-winning team is the best learning experience you could have.”
Taking over in the afternoon, Daniel set about testing Pirelli’s tyres and working through the manufacturer’s programme.
“It was good today but very busy, so it’s still a bit of a blur,” he said. “I did quite a few laps this afternoon, so I’m happy with that. I had a small off but otherwise it was a trouble-free day. The off was my mistake, I just lost the rear on the entry. It was a good opportunity to get behind the wheel and experience two different beasts today. In terms of the inevitable speculation, I think this test is something for Red Bull to look at, but there’s still the rest of the season with Toro Rosso to do, so I’ll switch my focus back to that and won’t get too caught up in any rumours.”
Commenting on the day’s running Race Engineering Co-ordinator Andy Damerum said: “The morning was a bit frustrating as we were late going out. We discovered a problem with the car last night and that set us back. Despite that we did get some good data and António was excellent throughout. As for the afternoon, Daniel had only about 45 minutes to swap over from his morning tyre test to driving our car, a completely different machine, but he was up to speed very quickly. As ever his feedback was exemplary and he gave us a lot of information to go through.”

Wiesbaden. Former Formula 1 driver Vitaly Petrov supports DTM in his homeland Russia. During the appearance of the most popular international touring car series this weekend in the Moscow City Racing event, Petrov will drive a DTM Race Taxi. And he also will be on site when DTM will contest the sixth round of its season at the Moscow Raceway (02nd to 04th August). There, Petrov will – inter alia – once again drive a Race Taxi.

In the meanwhile traditional Moscow City Racing, a spectacular two-day motor-racing event held right in front of the Kremlin walls, just two weeks before the maiden DTM race ion Russian soil, the series will be represented by big names: DTM Championship leader Mike Rockenfeller (Audi), Andy Priaulx (BMW) and former DTM driver Ralf Schumacher (Mercedes-Benz), who is extremely popular in Russia, will not only join Petrov at a press conference to answer all the questions of the Russian media representatives around DTM but also will be available for the fans during autographing sessions.

The highlights, however, definitely will be the demonstration runs on Saturday and Sunday with an Audi RS 5 DTM, a BMW M3 DTM and a DTM Mercedes AMG C-Coupé on the 3.7-kilometre track. On Sunday, Petrov will replace Schumacher at the wheel of the DTM Mercedes AMG C-Coupé, thus becoming the first Russian to drive a DTM car. “I’m thrilled by my cooperation with DTM,” said Petrov, to then address the Russian fans: “You definitely should attend the race from 02nd to 04th August. And who knows if you won’t be one of the lucky ones to win a lap with me on the Moscow Raceway.” Petrov was the first Russian Formula 1 driver and contested a total of 57 GP, from 2010 to 2012.

In the past years, the Moscow City Racing event has become a kind of tradition, in the Russian Capital. The sixth edition, in 2012, attracted and thrilled 300,000 visitors. The visitors will have the chance of getting very close to the DTM cars and witnessing them in action – and the same applies to numerous other racing cars, such as several Formula 1 cars and the mighty Kamaz race trucks used in the Dakar Rally. Having completed a first stint on Saturday, the DTM cars will be out on the track even three times, on Sunday.