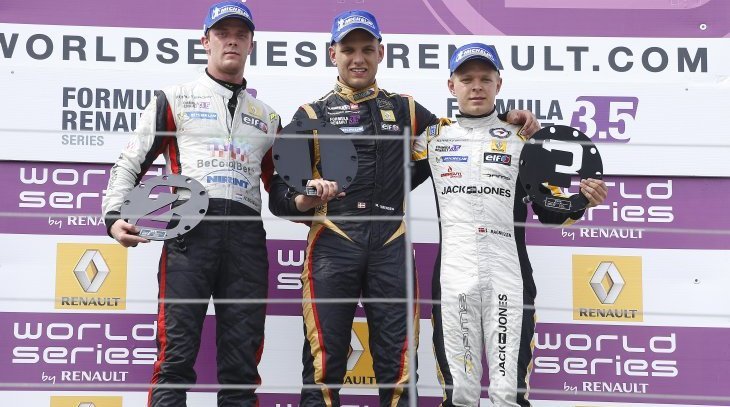 Marco Sorensen today claimed his first pole position in the Formula Renault 3.5 Series, before driving to an impressive victory at the Red Bull Ring. The Dane finished ahead of Nigel Melker (Tech 1 Racing) and Kevin Magnussen (DAMS), with the latter regaining the championship lead following the retirement of Stoffel Vandoorne (Fortec Motorsports).

Marco Sorensen (Lotus) took his maiden FR 3.5 Series pole this morning, qualifying ahead of fellow Dane Kevin Magnussen (DAMS) and Nigel Melker (Tech 1 Racing). The trio lined up on the grid ahead of Will Stevens (P1 by Strakka Racing) and Arthur Pic (AV Formula).

In an eventful start to the race, Nigel Melker slipped through into second to wedge himself between race leader Marco Sorensen and third-placed Kevin Magnussen. A chaotic first lap saw Stoffel Vandoorne fall back to 12th, while Pietro Fantin (Arden Caterham), Mikhail Aleshin (Tech 1 Racing) and Nikolay Martsenko (Pons Racing) all had to retire.

The safety car was introduced on lap 10 to allow Riccardo Agostini’s car to be removed. The Zeta Corse man had spun and stopped on track during an attempt to overtake Matias Laine (P1 by Strakka Racing). The safety car was called into action again a short time later after contact between Norman Nato (DAMS) and Sergey Sirotkin (ISR). Stoffel Vandoone, meanwhile, returned to the pits and subsequently retired from the race.

Marco Sorensen: “I hope this victory can be the turning point for our season. We really didn’t have any luck at the start of the year. We need to finish the season in this vein, and work hard and do our best. I’m delighted with this win, which is my first since Spa last year.”

Nigel Melker: “I’m very happy to be back on the podium. After twice finishing third, I’ve now managed second place. We’re improving, and tomorrow should be an interesting day. We’re hoping to do well.”

Kevin Magnussen: “It was a difficult race. I lost a place at the start and pushed hard to try to catch up. But I soon realised there wasn’t a great deal I could do, other than finish the race and secure the points, as the championship is very tight.”