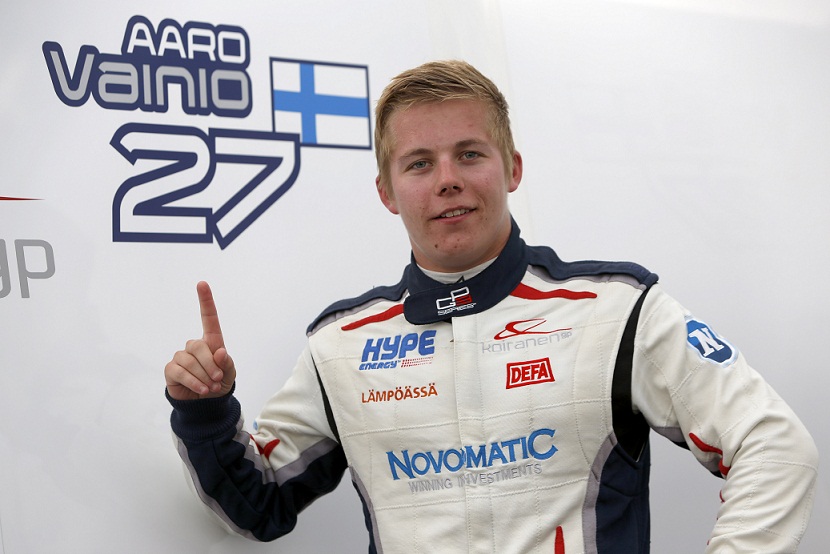 VAINIO SCORCHES TO POLE IN BUDAPEST-
Koiranen GP’s Aaro Vainio will head the front row at the Hungaroring
It’s all smiles for the Finn Aaro Vainio, the Koiranen GP ace flew to pole position in the dying stages of the qualifying session to secure his third pole in GP3. Conor Daly will start from second for ART Grand Prix with MW Arden’s Daniil Kvyat in third.
Once again the GP3 drivers had to contend with searing temperatures, 40 degrees on track as the drivers pushed to the limit in the 30 minute session. The ART Grand Prix trio of Daly, Facu Regalia and Jack Harvey were first to make their way onto the track with Kvyat the early pacesetter in the 1m34’s.
Koiranen GP’s Kevin Korjus was first to dip into the 1m33’s with Lewis Williamson (Bamboo Engineering) a tenth off. After ten minutes, the drivers returned to the pitlane for a new set of Pirelli rubber to continue in their quest for pole.
Harvey shot to the top of the timings until his teammate Daly demoted him, bettering his time by a mere 0.002s. Regalia joined his teammates by rising to P1 as the clock ticked down. Adderly Fong (Status Grand Prix) spun and was unable to continue, his car having to be pushed to the side of the track.
Daly reclaimed back his provisional pole with a 1:32.987, as the final minutes were a hype of activity with positions swapping throughout the pack. Williamson, Tio Ellinas (Marussia Manor Racing) and Carlos Sainz (MW Arden) were all men on the move, heading into the top three but all eyes were on Vainio who upped his pace to set pole position – his first of the 2013 season to set himself up for this afternoon’s race.
At the chequered flag it was Vainio a tenth faster than Daly, with Kvyat, Korjus, Harvey, Williamson, Melville McKee, Sainz, Regalia and Ellinas completing the top ten.
Race 1 takes place at 17.20 CET later today, with increasing temperatures and eight different winners so far, who knows what to expect for this afternoon’s race!
Qualifying