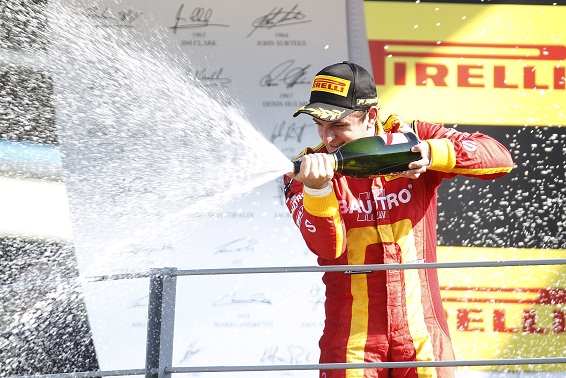 Leimer scorches to feature win—
Swiss driver claims championship lead—
Fabio Leimer has grabbed his third feature race win of the season with a storming drive in scorching conditions this afternoon in Monza, stealing a march at the start to lead his rivals all race long, apart from the pitstop window, for victory ahead of Sam Bird and Tom Dillmann and, with it, the championship lead.
When the lights went out Bird made a decent start from pole but Leimer made a better one next to him, slicing inside the Briton at the first chicane and tearing away, with a fast starting Marcus Ericsson and Jolyon Palmer just holding off an incredible start from Jake Rosenzweig, who blew past Stefano Coletti and Dillmann into the chicane.
Coletti soon pushed past to chase his championship rivals, with Dillmann bumping by the American a few laps later, with Rosenzweig unfortunately retiring soon after with probable damage to his left front. The Monegasque driver pitted on lap 7, one lap ahead of Ericsson, but was soon back again for a drive through after speeding in the pitlane, undoing all of his good work.
With the leaders swapping fastest laps between them Palmer jumped into the pits on lap 11, but his left rear soon detached at the Lesmos as he coasted to a halt. Leimer was in next time round to change his primes, with Bird staying out longer on his hard tyres, setting up an intriguing tyre strategy battle between the pair.
Ericsson soon ground to a halt too, with a rear puncture, but all eyes on the pitwall were on the gap between Bird and Leimer, which seemed to be static as they resumed their fastest lap battle from different sides of the circuit. The Briton stayed out until lap 20, but reappeared 4 seconds behind Leimer, seemingly casting the result in stone.
But no one told Bird, who kept up his string of fastest laps as he closed the gap down to below a second as the laps rolled away, with fresher primes against his rivals older hard tyres. But Leimer was made of sterner stuff, held his nerve, and was greeted by the chequered flag 0.8 seconds ahead of Bird, with Dillmann rolling across the line 5 seconds or so later. Stéphane Richelmi had a quiet race for P4, five seconds ahead of Julian Leal, who did a great job to finish ahead of James Calado in 6th, with Adrian Quaife Hobbs, Alexander Rossi, Sergio Canamasas and Vittorio Ghirelli taking advantage of clever strategies to round out the points.
The win changes the shape of the drivers’ championship, with Leimer now leading Bird by 153 points to 145, while Coletti and Felipe Nasr failed to add to their points after both dropping out with mechanical gremlins, standing on 135 and 130 points respectively, ahead of Calado on 119. RUSSIAN TIME lead the way in the teams’ championship on 223 points to Racing Engineering’s 205, ahead of Carlin on 198, DAMS on 165 and Rapax on 153 ahead of tomorrow morning’s sprint race.
Monza – Feature Race
Not Classified
Fastest Lap: Sam Bird (RUSSIAN TIME) – 1:32.749 on lap 25 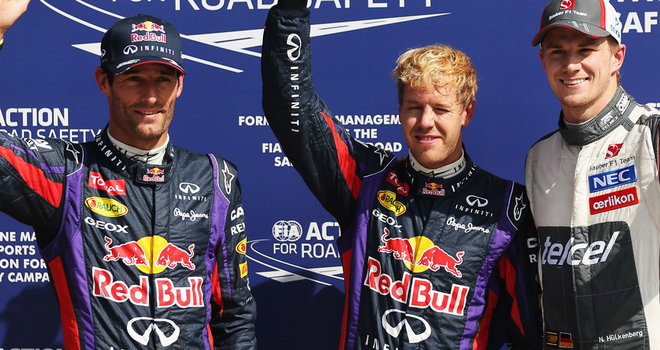 VETTEL LEADS A RED BULL FRONT ROW FOR THE START OF THE ITALIAN GRAND PRIX AT MONZA.

AND HIS 50TH POLE!
Car 1 SEBASTIAN VETTEL, Position: Pole Position, (3rd Practice – P1, 1:24.360)
“We didn’t expect to be so strong here, with both cars on the front row. It’s due to hard work from everyone in the team working long hours; we’ve had years where we’ve had a good car, but not a car that’s competitive in low down force trim, so in that regard we did our homework. This circuit has been a bit up and down for us, but this year it’s surely been more up so far! The car feels great, but let’s see what we can do tomorrow; we don’t get any points from today.”
Car 2 MARK WEBBER, Position: 2nd, (3rd Practice – P3, 1:24.677)
“After yesterday we thought we could challenge for the front row, but you never know and as we saw in Belgium and today, the grid can sometimes get a bit mixed up. But overall we stayed strong and have to focus on ourselves. The guys did a very good job; it’s not an easy track to pull everything together over one lap. The result is the maximum for the team and it was pretty much the maximum for me today; Seb has always been very strong here and he’s a tough nut to crack at this venue. I hope to have a strong race from there tomorrow.”
CHRISTIAN HORNER: “A fantastic team performance to get our 50th and Sebastian’s 40th pole position here in Monza. We’ve had a strong car all weekend, but it’s a track that hasn’t historically been our strongest, so it’s the best possible place to be starting tomorrow’s race from to try and convert today’s result in to a good points haul. The weather could be a factor tomorrow and there’s still a long way to go, but a really satisfying day today.”
(Renault) THIERRY SALVI: “We’ve looked strong all weekend, but you never take anything for granted here: delivering strong top-end power without compromising stability for the chicanes sees you making decisions on a knife-edge. We’ve worked to consolidate the inherent speed in the car and it seemed to continue to come our way today. Seb and Mark both did a great job to lock out the front row, which we can hopefully convert into the same result tomorrow.” 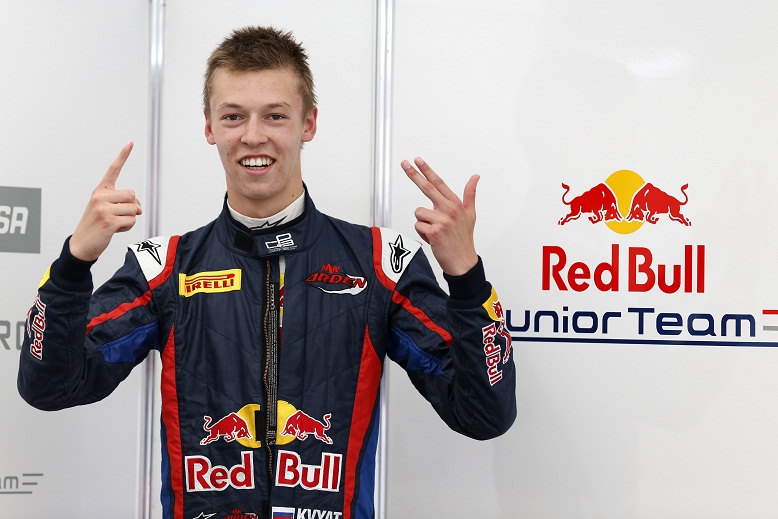 Kvyat flies to maiden pole in Monza—
MW Arden duo of Daniil Kvyat and Robert Visoiu lock-out the front row—
MW Arden’s Daniil Kvyat set a laptime of 1:36.933 to achieve his debut pole in the category and finish over half a second quicker over his nearest rival, teammate Robert Visoiu. The Romanian driver will join Kvyat on the front row in his best qualifying of the season with title contender Tio Ellinas (Marussia Manor Racing) heading the second row in P3. Kvyat’s flier was over seven seconds faster than the 2012 pole time set with the previous generation car.
The 30 minute session was filled with anticipation with four vital points up for grabs in the chase for the elusive GP3 crown. Another hot day greeted the 27 drivers as they lined up, eager to be in contention for pole position. Carlos Sainz and Lewis Williamson led the way with the Spaniard first to lap in the 1m37’s early on.
Kvyat demoted his teammate to take provisional pole, again showing good pace after topping yesterday’s Free Practice session. At the midway point, most drivers returned to the pits for new rubber and make set-up changes. The Russian driver was busy lighting up the timing screen as he lapped in the 1m36’s to set the target to his competitors by a large margin of half a second.
Ellinas was one of the big movers in the final minutes, shooting up to P3 behind Kvyat and Visoiu. Carlin’s Nick Yelloly in P5 was also trying to improve but ran wide over the kerbs which sent his car into a spin and a premature halt to his session. His teammate Alexander Sims also had an excursion into the gravel, whilst home favourite David Fumanelli (Trident) stopped at Turn 2 which was covered by yellow flags.
At the chequered flag, Kvyat enjoyed his maiden pole with his teammate Visoiu in tow. Ellinas can concentrate on reclaiming his lead in the GP3 title proceedings with a strong qualifying in third ahead of Sims, Yelloly, Sainz, Conor Daly, Series leader Facu Regalia, Kevin Korjus and Williamson.
Action is guaranteed in Race 1, which starts at 17.20 CET later today as the quest for the GP3 title rises another notch…
Qualifying
*Vainio has a 5 place grid penalty following an incident in Spa Race 2.
**Jorda has a 10 place grid penalty following Free Practice in Monza
F1Weekly Podcast # 824