FARFUS WINS AT Oschersleben and is Rockenfeller’s final challenger—

Oschersleben. The battle for the DTM crown is only a two-way affair. At the etropolis Motorsport Arena Oschersleben, Brazilian Augusto Farfus (BMW) wins the 400th race in history of the DTM from points’ leader Mike Rockenfeller and Jamie Green (both Audi). After errors by the opposition, this means that 30-year old Farfus is the only challenger to keep Rockenfeller from winning the 2013 title. Reigning DTM champion Bruno Spengler (BMW), Christian Vietoris and Robert Wickens (both Mercedes-Benz) all finished the race without scoring points and thus are no longer in contention for the title in the two remaining rounds of the season. In total, 70,500 spectators came to watch the race weekend in the Magdeburger Börde region.

Prior to the next round at Zandvoort on September 29th, Rockenfeller is leading with 124 points, clearly ahead of Farfus, who has 91 points. Even in case of another victory for the BMW driver at the circuit in the Dutch dunes, a second place would be enough for ’Rocky’ to become DTM champion for the first time.

Farfus scored his second victory of the season after his success in the season opener at Hockenheim. “My great start was the key to success. I overtook Jamie Green right away and I was in front. The stops were perfect, too. I am overjoyed. We still have a mathematical chance of winning the title and that is what we will be fighting for,” the Brazilian said.

Rockenfeller was also happy with second place. “Today, Augusto was in a class of his own,” he said. “Of course, I want to win the DTM title, preferably already at Zandvoort. But when that doesn’t work out, I will be more than happy to wait until Hockenheim as well.” About the collision between his pursuers Spengler and Wickens on lap 38, after which both Canadians had to park their cars, the points’ leader said: “Everyone knows that you have to finish the race in order to score points.”

Jamie Green having lost in the duel with Farfus after the start, he only had to let Rockenfeller past as well. Third place is the Brit’s best result since his transfer to Audi prior to the start of this season. “I had to wait for this result for a long time and I am very happy,” Green said. The team result of the brand from Ingolstadt was impressive: in total, eight Audis finished in the top ten at Oschersleben.

Gary Paffett was the best-placed Mercedes-Benz driver. The Brit started his 100th DTM race from twelfth place on the grid and moved up to finish sixth. “Actually, I am not that unhappy with the race. The opposition was strong, but not unbeatable. One could say that I lost my race in qualifying already,” the 2005 DTM champion said. For his fellow-Mercedes-Benz driver Christian Vietoris, championship hopes were reduced to a minimum after qualifying on Saturday as well. Vietoris started the race from 20th place and was classified 18th.

Dieter Gass, head of DTM, Audi: “That was the close team performance that we had hoped for: eight Audi RS 5 DTM in the points, that has never happened before. Of course, we would have liked to win this race as well, but the fact that Mike Rockenfeller made another big step in the championship is even more important. Now, he has a margin of 33 points and only one challenger. But there are still 50 points at stake. We will continue to work in a concentrated way to wrap up the title.”

Jens Marquardt, BMW Motorsport Director: “That was an absolutely great race. Augusto hasn’t made any mistakes and the pit stops were faultless, too. Today, Audi was very, very strong and still beating Rockenfeller will be more than difficult. But we will try.”

Wolfgang Schattling, head of DTM management, Mercedes-Benz:“Congratulations to BMW. Claiming victory here against such a strong Audi phalanx really deserves respect. Our performance, on the other hand, was weak, except for Gary Paffett with his sixth place. Now, we have to analyse qualifying and then be better prepared coming to Zandvoort and Hockenheim.” 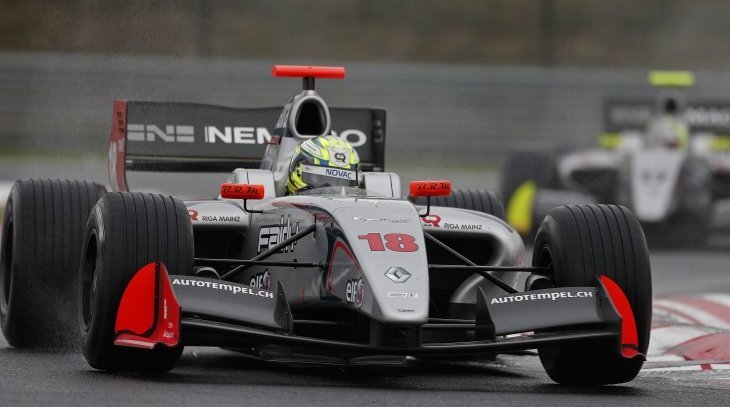 Nico Muller (International Draco Racing) mastered a wet track at the Hungaroring on Saturday afternoon to take victory in the weekend’s first Formula Renault 3.5 Series race from Kevin Magnussen (DAMS) and Sergey Sirotkin (ISR). After starting from row eight on the grid, the Dane increased his championship lead over Stoffel Vandoorne (Fortec Motorsports), who finished two places behind him in fourth.

In response to the rain, which was falling with increasing intensity, the safety car came out for the start of the race and led the cars round until lap five. Nico Muller made an early but unsuccessful attempt to dive past Andre Negrao, while Sergey Sirotkin (ISR) jumped up to third when Mikhail Aleshin and Antonio Felix da Costa came together.

In challenging conditions there was much chopping and changing in the pack. One of the men to profit was Nico Muller, who cashed in on a mistake by his team-mate on lap ten to take the lead. The Swiss driver then pulled away, eventually taking the chequered flag by fully 26 seconds from Kevin Magnussen (DAMS), who produced a brilliant recovery drive from 16th on the grid.

Sergey Sirotkin completed the top three, with Stoffel Vandoorne finishing one place behind him after starting 11th. Mikhail Aleshin came home fifth ahead of Nigel Melker (Tech 1 Racing) and Carlos Sainz (Zeta Corse), another driver to pick his way through the field from well down the grid. Will Stevens, Arthur Pic (AV Formula) and Matias Laine (P1 by Strakka Racing) were the other drivers to finish in the points.

Nico Muller: “We’ve had a lot of ups and downs this season, with the high point obviously being my win in Monaco. I really couldn’t wait to win again, and it’s been a long time for me. It’s good to come back like this and climb up a few places in the championship. The track was more slippery than ever but the car went incredibly well. The challenge was to stay on the tarmac and not make a mistake. I did that and managed to build my lead. I’d love to go and do it again tomorrow.”

Kevin Magnussen: “It’s a good result. Our aim was to be on the podium and get the points that come with it. We should be pleased with the result today. We’re trying to work even harder. Even though I’m leading the championship, my rivals will be giving nothing away.”

Sergey Sirotkin: “It was a good race after what was a pretty long break. We haven’t had much success this season, what with missing out on podiums and big points, but I managed to get some here today. I’m delighted. Like Kevin said, we now need to work hard and make sure we finish the season in style.”