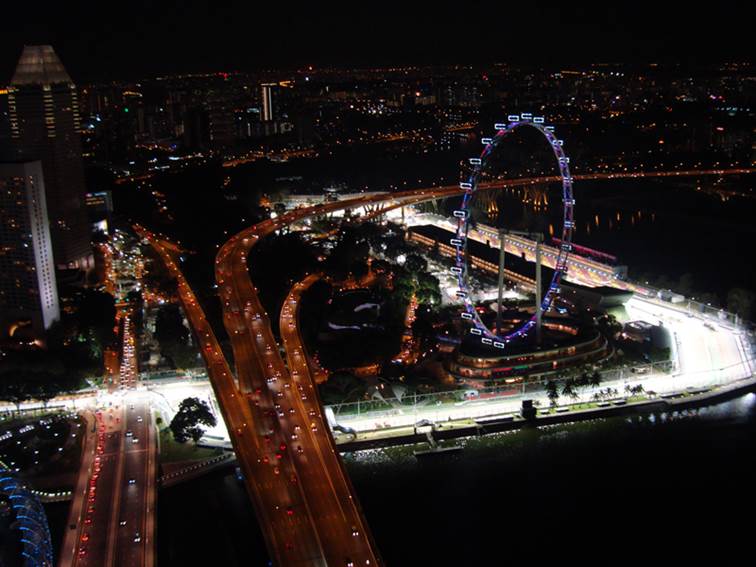 Clark and Nasir cover the Italian Grand Prix, we give you the Peter Brazier report and Tech Talk with Tim!

and here’s some great information about the Singapore Grand Prix—

“Almost 1700 headlights fed by 2000W lamps placed on a 7-km-long aluminium truss which is supported by 247 steel pylons, a 214-km-long electric cables system, 475 switchboards, a 57-km-long optical fibers system, 47 closed-circuit cameras for race monitoring placed in the operations centre. More than 530 loudspeakers arranged in all the areas attended by the audience, 500 radios for the communication between race commissioners and race professionals, 160 days of hard work and hundreds of men engaged.” These are only some of the numbers which allow the whole world to attend the Singaporean GP, which is the F.1 World Championship’s 13th event, come to its 6th edition. The Marina Bay street circuit was inaugurated in 2008 and hosted the F.1 World Championship’s first night race. The circuit is getting ready to switch on its reflectors again on September 21-22.

Who makes all this possible it’s the Italian company DZ Engineering, which is headquartered in Forlì. The company has the honor and the duty of shedding some lights on the Singapore’s darkness “It takes a six-month-assembly and dismantling work to arrange a three-day-event. In fact, it’s a fully off-taking lighting system”, explains the Project Manager Mr. Roberto Grilli, “It takes 100 days to install it. At mid-May we start to setup all the infrastructures inside which the track lighting system, the close-circuit cameras for on-track operations and the loudspeakers for sound diffusion, will be placed. We need to have all systems installed by the end of August, as it takes 10 days for them to be tested. It’s an extremely accurate check; every single piece has to be tested and checked. The rest of the pre-race period is dedicated to headlights pointing and all the other systems’ fine tuning. The dismantling begins the same night of the race and it takes about one month to dismantle the whole system. All materials have to be scrupulously inventoried after they are stored in a government’ s property area” continues Mr. Grilli the engineer “ It has to be considered that we have to work in the heart of a very dynamic city and on streets which are open to daily traffic. The track is closed to traffic on the Wednesday night of the race week, only some streets are opened every morning to let traffic stream towards main streets. Furthermore, there are also some private areas to which access is allowed only in certain periods. So we have to follow a well-structured time schedule which makes our work very long.”

and Radio communication systems. All the system is fed by twelve stations which are deployed along the circuit. Each station is equipped with two 500 kVA power units working at the same time. In case of malfunction of one of the two units, the second one is able to support the whole electric load, which is equal to 30-35%. The track lighting system is made available through 1565 headlights powered by a 2000 W lamp, while the three tunnels are fed by 179 headlights powered by a 400 W lamp.”

Thanks also to the know-how gained by the company for what concerning the carrying out of the lighting system of some of the main artistic and historical places such as the Roman remains in Pompei and Paestum, the Temples’ Valley in Agrigento, the Singapore National Art Gallery, the Otranto’s Cathedral, the S.Vitale’s Benedictine historical complex in Ravenna (just to mention a few), since this year, the DZ Engineering is in charge of carrying out the lighting system of the pit stop area, whose façade will be lighted up for the first time “The Singapore’s government announced a tender for the lighting of ten sites of historical and artistic interest, whose value has to be increased during shooting.” The Government, through the Formula 1’s mass media exposure aims at promoting the State-City of Singapore to the whole world. “Doing that, the visibility of the city’s most important monuments and touristic attractions will be increased, creating an added value for the paying audience and television-viewers. So, starting from this year, the Pit Building’s façade will look different thanks to our cooperation with two other Italian companies: Namaste and Proietta. What is it? You only have to watch the GP to discover that”, ends Roberto Grilli.

Now we only have to wait for Vettel and Alonso to challenge each other in the Singaporean night, after the Red Bull’s successful race on the Monza’s fast straights. Ferrari will have to make a great effort and the Marina Bay Street Circuit could represent the last chance for the Italian team to be a candidate for the 2013 World title, before focusing on the 2014 season. It was the Red Bull’s German driver who won the Championship last season. The blond racer will be a contender for the win also in Singapore, ahead of Jenson Button and Fernando Alonso.