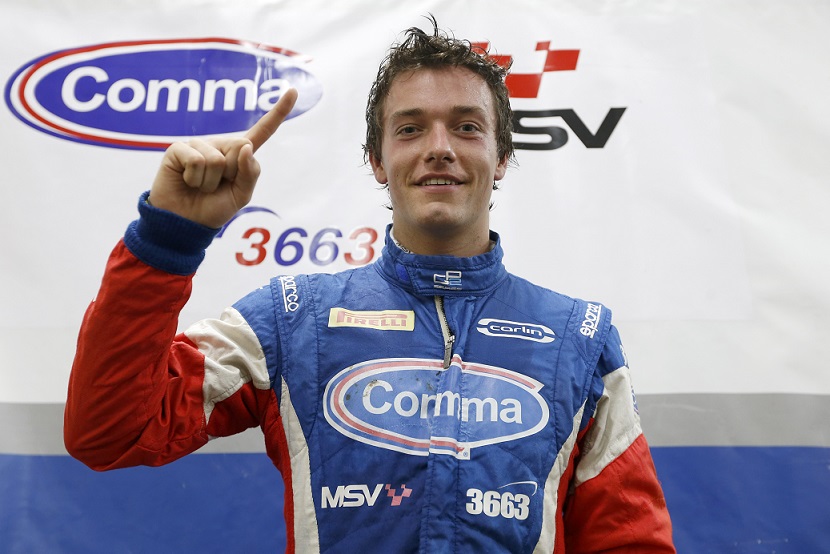 Palmer grabs maiden GP2 pole—
Briton leads Carlin front row in Singapore—
Jolyon Palmer picked up where he left off earlier today: the Brit dominated an eventful and tricky qualifying session at Marina Bay with a blazing laptime of 1:53.600. He beat teammate Felipe Nasr by two tenths. Series leader Fabio Leimer finished third, a hair’s breadth off the Brazilian.
Alexander Rossi and Nasr were leading the pack when the track went live. All drivers opted for the Super Soft Pirelli tyres. In the opening stages of the session, Nasr was quick to set the early pace in 1:54.244, his teammate in tow but two tenths slower. Mitch Evans locked up at Turn 10 and crashed into the barrier. The yellow flags came out and the track was cleared with eighteen minutes left on the clock.
Leimer was able to find a clear lap and dipped under 1m54s bettering Nasr’s time by three tenths. Soon after that, Daniel Abt stopped his ART car at Turn 14 followed by newcomer Gianmarco Raimondo who lost control of his Trident machine and smashed it at Turn 18. The session was red flagged with fourteen minutes to go.
At the restart, traffic intensified on the track, but just like he did during today’s free practice, Palmer managed to find a clear lap and the extra pace to improve his laptime and edge Leimer out of the top spot. Nasr also improved his best laptime, enough to move ahead of the Swiss, but not enough to claim pole.
And so, at the chequered flag, both Carlin cars came back to the pits and waited to see if Leimer was going to be able to beat them on his last attempt, but he couldn’t and it was Palmer’s time to celebrate on his first GP2 pole position. Behind the trio, Rossi finished fourth (his best qualifying result) ahead of Stéphane Richelmi, Tom Dillmann, Sergio Canamasas, James Calado, Marcus Ericsson and Sam Bird who will have to work extra hard tomorrow to try and catch up with title rivals Leimer and Nasr.
Singapore – Qualifying Practice
F1Weekly Podcast # 826