SEBASTIAN VETTEL, Finish Position: WINNER OF THE SINGAPORE GRAND PRIX…
“It’s just been a fantastic weekend. The start was close, but then we had strong race pace, especially when the safety car came in, and we pushed very hard to try to build up a gap. You never know what’s coming up and what can happen. The last ten laps seemed to go on forever inside the car. I kept my concentration by reminding myself how easily you can make a mistake around here, the walls are close and if you don’t pay enough attention it can go wrong pretty quickly. I focused on hitting the brakes correctly and on saving the tyres. We didn’t expect to be that strong, but it’s a team effort. Everyone is pushing hard and I think the secret, if there is one, is that we love what we do and we’re so passionate. The conditions aren’t great here with the heat, but the team always pushes hard and I think that’s what makes the difference. I’d like to say to everyone working for team that it’s a privilege for me to be driving the car you have built.“ 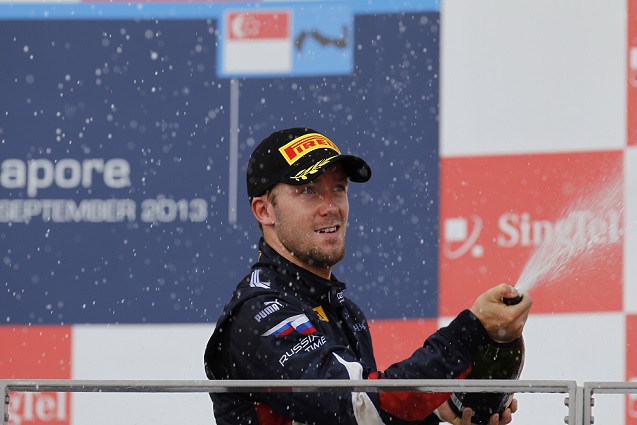 Bird cruises to Singapore sprint race win—
RUSSIAN TIME driver takes fifth victory of the season—
Sam Bird kept the pressure on Series leader Fabio Leimer scoring another win through a display of mature driving to take a lights to flag victory in today’s sprint race at the Marina Bay circuit. The Briton headed Marcus Ericsson and Leimer.
At the start, Bird was able to control the rest of the pack from pole position, Ericsson in tow. Behind the pair, Leimer leapfrogged a slow-starting Tom Dillmann to move up to third with Stéphane Richelmi also passing the Frenchman. Further down the field, there was a bit of chaos at Turn 8 when Stefano Coletti braked too late and punted Mitch Evans with Simon Trummer, Alexander Rossi and Dani Clos as collateral damage. All cars could resume their race, but the Monegasque driver received a drive through penalty.
At the front, Bird managed a small breather to Ericsson, both men saving their tyres and so were Leimer and Richelmi. Behind them, yesterday’s race winner Jolyon Palmer was fighting to keep his position, but the Brit soon started to struggle on his super soft tyres and had to let Jon Lancaster, Johnny Cecotto and Daniel Abt through. The German was running in seventh position but was handed a drive through penalty when it was shown that he had failed to slow down under yellow flag. Unfortunately for the German, he did not observe his penalty within the allocated window and was black flagged. Palmer was then busy defending from a charging pack made up of Daniel De Jong, Rene Binder and Vittorio Ghirelli. The Brit eventually returned to the pits for another set of tyres.
Ericsson looked like he was on a mission to try and catch Bird, the gap splitting the pair going down from 2.4s to 1.3s, but the RUSSIAN TIME driver picked up the pace again and made sure that the Swede was too far to be a real threat and drove safely to the chequered flag enjoying a fifth win this season and closing the deficit on Leimer in the standings. The Swiss had a quiet race to third ahead of Richelmi, Lancaster, Cecotto, and De Jong. Adrian Quaife-Hobbs charged to eighth and the final point of the race overtaking Binder in the final stages.
Leimer still holds on to the lead of the standings with 179 points to 172 points for Bird, while Nasr’s challenging race brought him no points and left him on 148, ahead of Coletti on 135 and Calado on 134 points. RUSSIAN TIME extend their lead in the teams’ standings over Carlin by 264 points to 247, ahead of Racing Engineering on 241 and DAMS on 205. The final round of the season will take place in Abu Dhabi in the first week of November.
Singapore – Sprint Race
Not Classified
Fastest Lap: Jolyon Palmer (Carlin) – 1:57.368 on lap 14
F1Weekly Podcast # 826