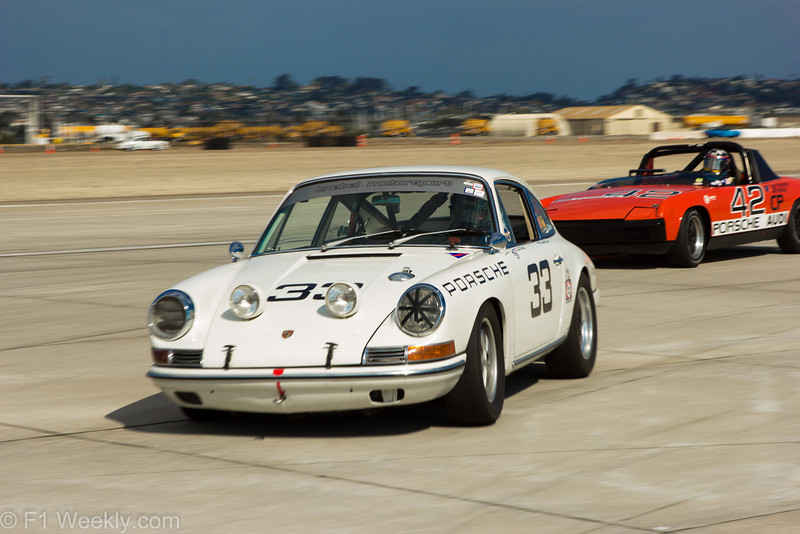 The 2013 Coronado Speed Festival, held September 21-22 at Naval Air Station North Island in Coronado, California, celebrated the 50th anniversary of the Porsche 911 with a full weekend of racing. www.F1weekly.com staff photographer Mike Greene was on scene to document this fantastic gathering of vintage race cars.

Overlooking the harbor and the San Diego skyline, The 2013 Coronado Speed Festival was held September 21-22 at Naval Air Station North Island in Coronado, California.  The event celebrated the 50th anniversary of the Porsche 911 with a full weekend of racing cars of all kinds.

As part of San Diego’s Fleet Week, the Speed Festival is one of San Diego’s most successful fundraisers for the military and offers a variety of pulse-quickening events.  This year, the Honorary Grand Marshal was Tony “A2Z” Adamowicz. His renowned career includes winning the 1968 Trans-Am Championship in the Milestone Racing Porsche 911. Adamowicz also won the 1969 Formula 5000 championship in his Gurney Eagle F5000, in which he made his Coronado Speed Festival racing debut in 2011.  Along with the nine racing groups of vintage race cars, the weekend also features as one of the seven stops in the SCCA Pro Racing Playboy Mazda MX-5 Cup circuit. 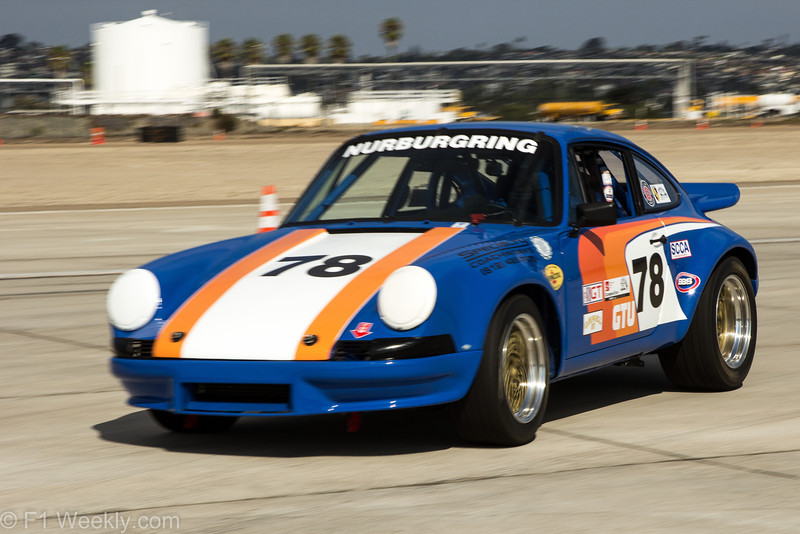 HISTORY OF THE CORONADO SPEED FESTIVAL

In 1997, an innovative idea was formed – the idea to combine a racing event with an event to pay tribute to the nation’s military, and additionally get more exposure for the Navy within the community of San Diego.

The event would be called the Coronado Speed Festival, and vintage cars from around the country would race at Naval Air Station North Island, on a track that was created in days – a spectator-friendly 1.7 mile course, constructed on the runways and taxiways of the military base. Over the course of two days, race fans, San Diegans and other interested parties would watch different race groups zoom around the track, all while stepping back in time to enjoy auto racing’s rich history, with tours of the racecar pits and the ability to speak with the drivers of these unique machines. Car Enthusiasts can also visit the Car Club Corral, which shows off a variety of automobiles that range in age, make and model.

The first event took place in October of 1997. The Holiday Bowl, a non-profit organization whose mission is to generate tourism, exposure, economic benefit and civic pride for San Diego and its citizens by producing the nation’s most exciting bowl game and festival of events. The partnership seemed to be a perfect fit, not only in that the group and the organization’s mission were similar. The event then transitioned to be part of Fleet Week San Diego. Fleet Week is a US Navy, US Marine Corps, and US Coastguard tradition focused on honoring the men and women of the military.