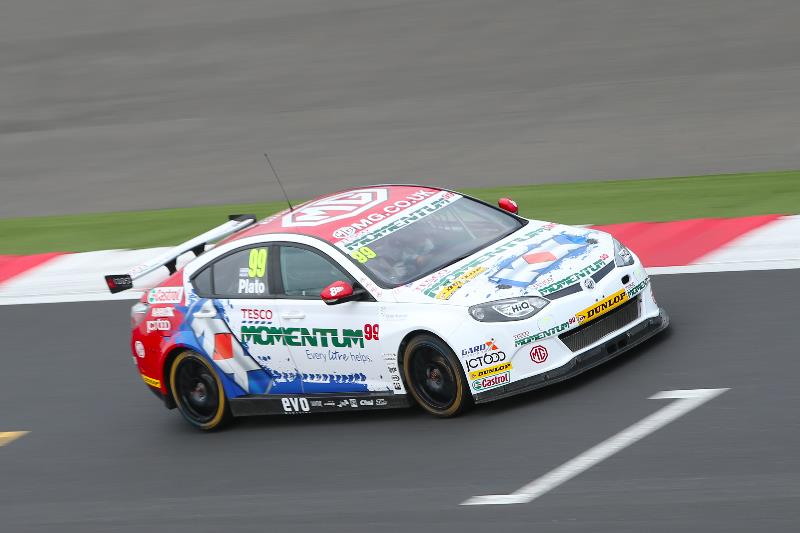 Plato on pole at Silverstone BTCC—

MG KX Momentum Racing streaked to its fourth qualifying one-two of the season as Jason Plato and Sam Tordoff produced a stellar performance at Silverstone. The session turned out to be one of the closest in BTCC history with the top twenty cars sensationally covered by less than a second.

The MG duo drafted in tandem during the early running with each racer getting an opportunity to push for the ultimate lap, and it was Plato who edged out his young team-mate by the miniscule margin of just 0.009s to claim his third pole position of the 2013 campaign.

Dave Newsham backed-up his practice pace from earlier in the day with an impressive run to third on the grid – his and Speedworks Motorsport’s best qualifying performance of the season so far.

Championship challenger Colin Turkington will steal a march on his main title rivals by completing the second row for tomorrow’s opener in his eBay Motors BMW, as Honda endured its most difficult qualifying session of the season. The fastest Honda Civic driver has qualified on either the first or second rows in the previous eight events this season, but incredibly Matt Neal produced the best performance for the Japanese marque down in ninth place here at Silverstone. Championship leader Andrew Jordan could only manage tenth while reigning supremo Gordon Shedden qualified in 15th – his lowest position of 2013.

Three young guns took maximum advantage of the woes experienced by the main contenders with Frank Wrathall being particularly impressive. Despite running in the top five early on Wrathall’s Dynojet Toyota failed a mid-session ride height test and the stewards removed his lap times from the leader board. Undeterred by the set-back, Wrathall returned and fired himself back into fifth on his first flying lap after his team had corrected the issue.

Jack Goff completed the best qualifying display of his short BTCC career when he hauled his Vauxhall Insignia into sixth ahead of the ever-consistent Adam Morgan in the Ciceley Racing Toyota Avensis. The eBay Motors BMW of Rob Collard did enough to edge out the aforementioned Neal and Jordan to claim eighth.

Andy Neate narrowly missed out on a top ten qualifying berth but the Team Club 44 squad will be hugely buoyed by the potential shown in its Chevrolet Cruze, particularly after the unfortunate accident in the recent Rockingham opener that forced the car out of the remainder of the event.

Lea Wood continued his dominant day in the Jack Sears Trophy by cruising around comfortably quicker than the Ford Focus of Liam Griffin.

Jason Plato said: “I think we’re in pretty good shape – our race pace was really good last year here so we’re well placed for tomorrow. I’m pleased to get another one-two for the MG KX Momentum Racing team, but we’ve got to convert it to results in all three races tomorrow. It looks like it will be set dry so we won’t have the same issues we suffered at Rockingham, so I’m looking forward to getting out there and having three good races.”
Sam Tordoff said: “I’m not sure where I can find the nine thousandths, but we’ll be looking very closely at the data to try and find out! The car felt really good in qualifying, we’ve made steady progress from an average start in free practice and it’s always good to see positive progression across the weekend. Jason and I went a different way in set-up to learn as much as we can about the car but have settled on very similar things for both cars so it should be a great battle tomorrow.”
Dave Newsham said: “It’s been good to have a strong qualifying because we haven’t been able to hook it up this season so far. We came here with a completely different car and have been on it from the word go. We’ve been refining our set-up all day, and while I don’t think we could have got any more time out of it today I know we’ve got great race pace. We’ve changed pretty much the whole front end and it’s eliminated the understeer we’ve been suffering recently, so I’m really looking forward to tomorrow.”
Andrew Jordan said: “I’m actually really pleased with my lap – I was really smooth and the car felt great. It’s good to be so close to Matt (Neal) with maximum ballast, and to be ahead of Shedden is really important. Turkington will be really strong from his grid spot tomorrow, but I’ve got to run my own race and we’ve hit our target of the top ten today.”

Colin Turkington said: “Straight line speed is important at Silverstone and it isn’t one of the strengths of our car. We’ve done a really good job to maximise the strengths we do have – we’re particularly good in slow corners and change of direction, and we made the most of that in qualifying today. We lost most of FP2 with a problem on the car, so there was an element of chance in that session. Part of the job is done, but the important bit comes tomorrow.”

Daniil Kvyat (Carlin) picked up the first winners’ trophy of the FIA Formula 3 European Championship weekend at Zandvoort. At the 4.307 kilometres long Circuit Park Zandvoort, the Red Bull junior driver won with a margin of 2.859 seconds from Felix Rosenqvist (kfzteile24 Mücke Motorsport). Alex Lynn (Prema Powerteam) completed the trio on the winners’ podium, while points’ leader, Raffaele Marciello (Prema Powerteam), had to make do with fifth place. He is now 59.5 points clear of his rival Felix Rosenqvist.

Out in front, the battle was decided at an early stage: starting from pole position, Daniil Kvyat took the lead and also defended his position at the two restarts that were necessary after as many safety car interventions. Lucas Wolf (URD Rennsport) had caused the first neutralisation, having already parked his car on the formation lap. On lap seven, Félix Serrallés (Fortec Motorsport) crashed into the Armco barriers, which brought the safety car out for the second time.

Daniil Kvyat (Carlin)
“After starting from pole position for the fifth time already, I finally managed to score my maiden win in Formula 3. I am really happy about it. I have been working on improving my starts for a long time and I managed to stay in front and pull a gap here. I only had to be careful in the two restarts, because the long straight provides many opportunities to attack.”

Felix Rosenqvist (kfzteile24 Mücke Motorsport)
“I started the race with four used tyres and therefore didn’t expect to match Daniil’s pace. At the first restart, I had a very good exit from the final corner and I tried to attack Alex. Fortunately, it worked out, which gave me a couple of more points to allow me to reduce the gap to Raffaele in the drivers’ standings a little bit further. For the two remaining races this evening and tomorrow, I am optimistic. I have fresh tyres and I will be starting from pole position.”

Alex Lynn (Prema Powerteam)
“My start wasn’t the best, because there was hardly any grip on the track due to the rather low temperatures. At the first restart, Felix managed to overtake me, which, of course, was a pity from my point of view. But third place and the points for second are also good for the battle with Lucas Auer for third place in the drivers’ standings.”